That Marvel’s Avengers released when it did could be considered great timing. With the MCU coming to a grinding halt, I was looking forward to this as a perfect replacement. But after a worrying beta filled with repetitive gameplay and awkward mission structure, Marvel’s Avengers left me with a few concerns.

Its full release is definitely better; but not by much. There are many stand out elements, ones that could have been represented better in the beta and general marketing. Marvel’s Avengers is a mostly positive experience, but fails in its goal to create something deep and long-lasting. Its strong campaign leads to many memorable moments, but succumbs to an over-emphasis on RPG stat grind paired with underwhelming power creep. It left me feeling as though Marvel’s Avengers should have played to its strengths and craft a tightly structured, linear experience, rather than tacking on a Destiny-style games-as-a-service model, to no avail. 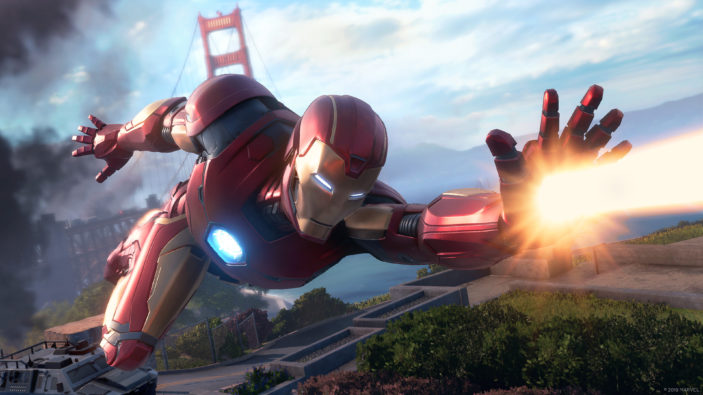 That seems like a drubbing, but like I said: it’s not all bad. For one thing, I was surprised by Marvel’s Avengers campaign mode for a number of reasons; it’s well-structured, incredibly cinematic, and deftly performed. There is a genuinely engaging superhero story at the heart of this thing. While I wasn’t a fan of the tacked-on ending, the campaign mode does a great job of building its narrative around the Avengers’ finest moments. I also find it fitting that some of the best Avengers stories come after the damage has been done, proving the writers know their stuff.

After the A-Day attack at San Francisco, and the disbanding of the Avengers, Kamala Khan is set on an accidental journey of epic proportions. Players will spend most of their time as Kamala, who later becomes Ms. Marvel, as she attempts to track down each of the estranged Avengers in hopes of reuniting the team. Their goal? Stop the evil AIM corporation from implementing a scheme for world domination.

The individual narrative beats are straightforward and admittedly predictable, its appropriately comic book grade material. But Kamala Khan’s charming presence becomes the heart of the experience, driving the game forward. Her interactions with each of the Avengers are the campaign highlights, winning them over with quips and her can-do attitude. The first couple hours of the campaign are most definitely its strongest. No bloated missions or repetitive environments, just Kamala proceeding through linear and cinematic missions with a nice consistent pace and excellent foundation. Developer Crystal Dynamics has pulls from their experience on the rebooted Tomb Raider series, and it shows.

It also helps that as Kamala meets each hero, they each get a moment to shine. Playing as Tony Stark, desperately trying to piece together a home-made version of his armour, as his house is blown to pieces around him by invading forces, is a great moment. By the time the campaign enters its last few hours, it starts trying backdoor in the repetitive side missions introduced in the beta. You can, thankfully, ignore them in order to streamline through the core missions. It tries to make the transition from linear single-player rollercoaster to multiplayer games-as-a-service treadmill as smooth as possible, but it can’t do it. These missions stick out like a sore thumb in contrast to the quality of everything else around them. 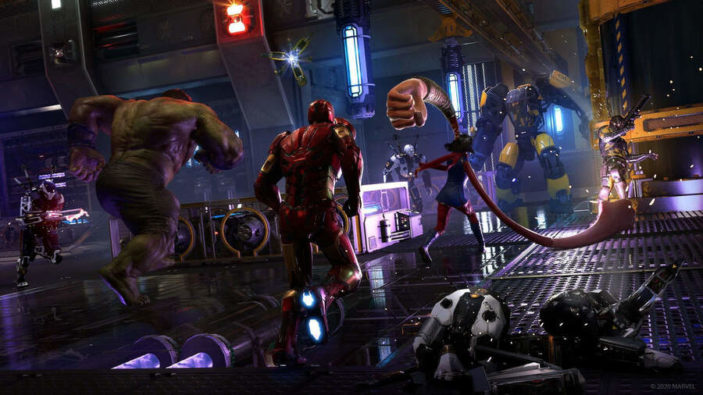 This weakness is felt all throughout the game’s multiplayer component. Some characters are simply more fun than others. Iron Man feels more varied in terms of his abilities and combos, particularly when his skill tree has been fleshed out, but his flying feels like a poor man’s Anthem (which is a strange sentence indeed). Hulk, who seems like he should be the most fun of the lot instead feels the most severely underdeveloped. He suffers a punishing lack of attack combos and interesting abilities and most of the game’s environments can’t be destroyed, further limiting his impact.

If the unbalanced nature of each hero wasn’t enough, attacks feel hollow and lack any real weight or impact. Each hero features a upgradeable skill tree with light, heavy and ranged attacks, all of which can be obtained through normal gameplay. Once each skill tree is completed, the difference in terms of attack variety becomes clearer, but this in no way excuses the repetitive naturae of each fight. I could understand if certain liberties had to be taken in order to create an authentic experience for each hero; but this this doesn’t feel authentic. The heroes feel really unbalanced — there are clear favourites among them, heroes that are better than others in every way — and in a GaaS multiplayer title, that’s a bad sign.

It’s worth noting that the Avenger’s Initiative mode should most definitely be played after completing the campaign to avoid any nasty spoilers. But once I got around to this multiplayer mode, I was reminded of exactly why I didn’t enjoy the beta. Put bluntly, this mode is simply too repetitive. You can check out our beta preview here for a lengthier rundown on this mode, but I’ll do my best to lighten the load here. This mode splits missions into three distinct portions: Warzones, Dropzones and HARM Rooms.

Firstly, Warzones and Dropzones allow players to drop into various environments in four-player co-op. Warzones function as large scale dungeon-style missions, while Dropzones serve up smaller, bite-sized objectives. Villain Sectors also give players the chance to smash through some enemies on their way to a final boss fight. While these modes usually yield larger and more rewarding loot drops, bosses are recycled straight from the campaign with no new additions. HARM Rooms serve as training exercises to sharpen your abilities and build your skill tree, but never really make a genuine attempt to feel different. Same room, similar enemies, rinse and repeat. Each hero also gets a specific string of Hero missions filled with character-specific loot, but these also fall victim to repetitive enemies, environments and objectives. The main issue with this whole mode is that if you weren’t aware of the mode or mission you picked, you would struggle to tell the difference. 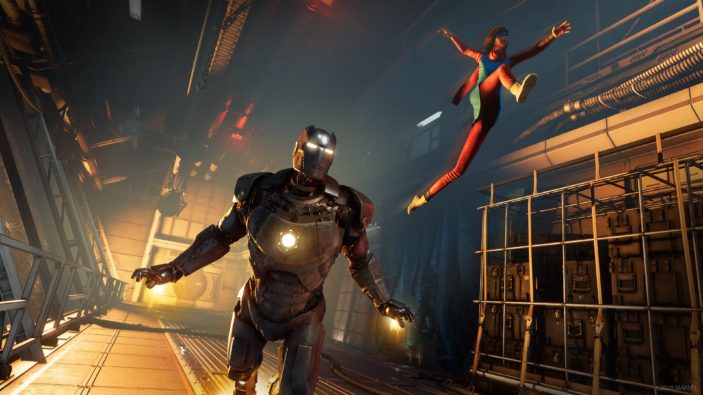 Customisation and loot are heavily emphasised in both campaign and multiplayer modes, and while there are multiple skins to unlock for each hero, there aren’t nearly enough to make the grind for each one feel justified. Unfortunately, Marvel’s Avengers also opts for invisible loot, meaning that the gear you’ve worked so hard for isn’t visible to the player, instead focusing on particular statistical upgrades and tweaks. The main problem here, is that while each item attributes to your overall power level, a necessary element of progression and motivation, you hardly ever feel these modifications. If you’re meeting the required power level for a particular mission, combat feels effective and smooth. But past that point, it’s all a mystery to me. Sadly, this left me scratching my head, questioning the strength of my motives and overall interest. I still can’t understand the live service choice for a game that fails to grow and support itself under the weight of such a lengthy progression system without the presence of any real change or growth.

Overall, Marvel’s Avengers showed a strong foundation with plenty of potential in its first few hours. While predictable, the campaign is strong, filled with many cinematic and engaging moments. The structured and linear approach to the campaign feels right, and more in line with current single player stories; and given the nature of such strong and interesting characters, moments feel weighty and emotional. Kamala Khan is also as charming as ever, and a great fit for the team, both in terms of personality and functionality.

The multiplayer mode however, really brings out the repetitive nature of both combat and mission structure, which never really lets up. I hope that future updates can help the experience, as there remains plenty to draw you in; but little to keep you around.