With the way Marvel’s MCU has come to dominate the movie landscape, and AAA superhero games such as Marvel’s Spider-Man breaking sales records, there’s been a lot of interest in Square Enix’s take on Marvel’s Avengers. We got our hands on roughly three hours of gameplay in this week’s Closed Beta, and while there’s plenty to love, there’s also plenty of questions that need answering. This is most definitely a deeper dive into an authentic Avengers experience, and a stylish one at that. But style is not always king, and we may need more time to determine if there’s substance to match.
This beta splits itself into three distinct sections. The first is the A-Day tutorial sequence featured in our PAX Aus preview last year, full of action and interplay between heroes. Players will now get a chance to experience first hand the events that take place on A-Day, a celebration held to appreciate and congratulate the efforts of our Avengers; that is, until it all goes pear-shaped. Long story short, the Avengers couldn’t save the day, Captain America is seemingly killed, and the Avengers are disbanded. This A-Day sequence sets a strong foundation for the journey ahead. For me personally, it ticks all the boxes for my dream Avengers game; it’s cinematic, well-paced, and gives you a nice slice of each Avengers’ combat, traversal mechanics, and overall feel. 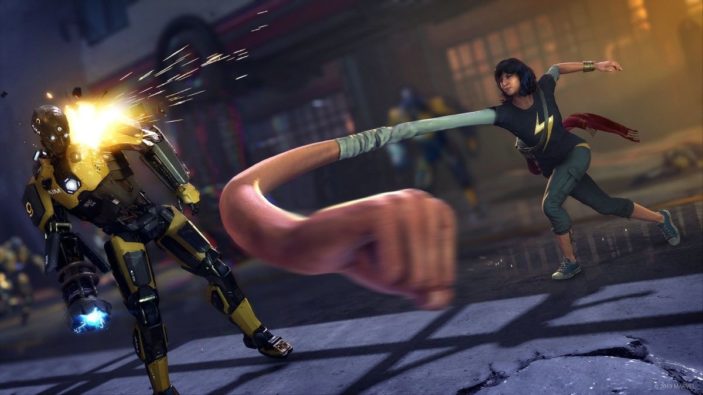 I can understand how the game would suffer from a consistently linear and focused narrative given the variety and freedom The Avengers, both as characters and the larger franchise, are capable of, but during this initial mission, combat is intuitive and fluid, and while all playable characters utilises a light, heavy and ranged attack, each feature their own special abilities to use in both combat and traversal. Switching between each of the Avengers feels natural and keeps the mission moving at a lively pace, allowing players to use each hero in a particular scenario. The culminating boss fight between Black Widow and Taskmaster is a little button mashy but features some impressive cutscenes which blend seamlessly into gameplay, all while keeping the quick time events to a minimum, given they feature at all in the first place.
The second story mission sees Kamala and Bruce on a trip to track down an abandoned S.H.E.I.L.D. lab in Russia. While there’s less to say about this mission in terms of linearity. Players are treated to some interesting conversations between Kamala and Bruce, before they find themselves on the wrong end of an enemy ambush, as the Hulk is pitted against Abomination in an admittedly badass boss fight. This mission is definitely more relaxed in terms of pace but fleshes out the combat mechanics, given we spend more time with these two characters. The Hulk is destructive and brash, with shockwaves and thunderclaps for special abilities. Kamala is much more agile, as she stretches about, giving you more variety in terms of traversal, as she swings across large areas. The fact that they feel different on such a basic level is a good sign. The Hulk feels slow and heavy, while Kamala feels light and nimble, yet less powerful. While combat doesn’t feel quite as deep just yet, I felt as though encounters, although frequent, were short and sweet. 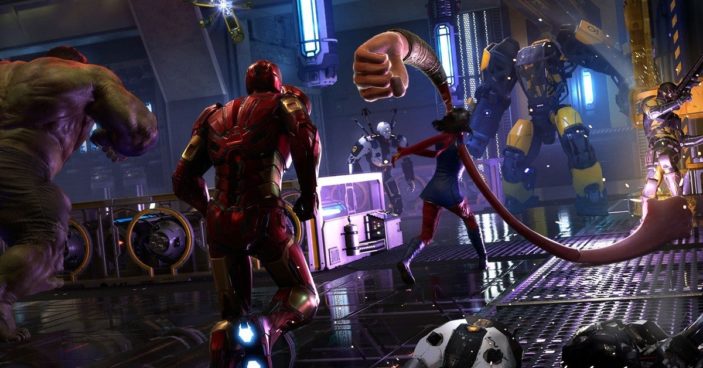 After completing both story missions, the beta opens up into a third phase, with hub worlds and side missions. These missions are split into three types; Warzones, Dropzones and HARM Rooms. Warzones allow teams of four to complete dungeon-like missions, where players must cooperatively work through waves and rooms of enemies in search of loot and rewards. Dropzones however, function as short, spontaneous missions with various objectives. Finally, HARM Rooms serve as virtual training rooms, where players must take on multiple waves of enemies. While these missions feature various objectives, they all centre around you ability to beat numerous enemies to a pulp. I only hold the opinion that combat feels slightly repetitive due to the fact that upgrades are few and far between, and understandably so; this is a beta after all. But unfortunately, it is with this sense of progression that Marvel’s Avengers begins to show its cracks.
Marvel’s Avengers takes on some of the most popular tropes from games before, and much like the mission structure and hub worlds, it all feels very much like Destiny. Upon completing a mission, players will get the chance to unlock and equip pieces of armour, giving each character upgraded armour, abilities and perks, particularly against specific enemy types. Much like Destiny, the levelling system here scales according to the armour you unlock and equip. The problem here is that while there are three main pillars of progression; armour, clothing and abilities, the grind already feels real. I can understand the variety at play here, shaping and deepening much of the combat for each character, but it’s also unclear as to the balance between these smaller side missions and the larger, more cinematic story missions. After all, we can only defend some many areas of importance from impending enemies while an A.I. program unlocks or activates something. In saying this, there’s a very real chance that your heroes will look and play completely different from those of your friends, but it remains a mystery just how much effort; be it solo or cooperative, will go into fleshing out these heroes. 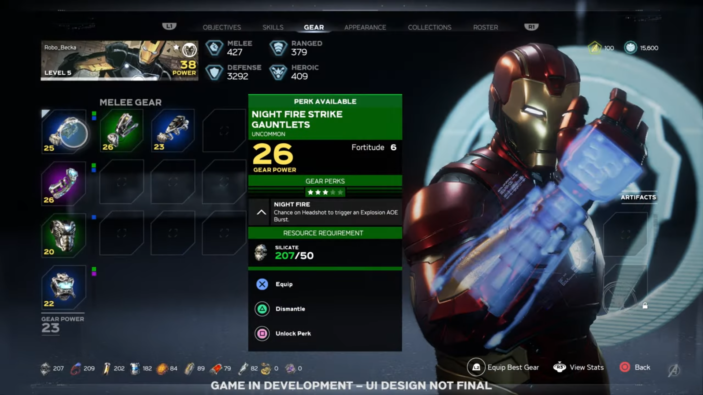 So far, there are things about Marvel’s Avengers that I’m definitely impressed by, and a fair few things I’m worried about. Combat is strong, the narrative focused missions are intense and engaging, and progressions feels wide and varied. But I still have many questions. How will story missions work with open areas and side missions? How many locations and progression will shake up these potentially repetitive side missions? At what stage in the game will Thor shave his head? In all seriousness, this decision to blend a dedicated linear narrative with a service-based experienced is definitely a bold one, I can only hope that these heroes don’t crumble under the weight of their own ambition. While you wait, check out an overview of the beta below:
The closed beta launches this weekend for those who have pre-ordered the game. Marvel’s Avengers will launch on Playstation 4, Xbox One, Windows PC and Google Stadia on the 4th of September.