Hyrule Warriors: Age of Calamity Review: AKA The Bokoblin Grind

Age of Calamity is the latest in the Hyrule Warriors series, revolving around The Legend of Zelda: Breath of the Wild. I don’t know about you, but I’ve spent the whole of 2020 waiting for more sequel news. And I’m gutted that I haven’t heard anything yet.

While Age of Calamity may act as somewhat of a prequel to Breath of the Wild, as it’s set 100 years before the Calamity, it still does its job to tease the palate for what’s to come. In its own special way, of course.

If you’re unfamiliar, the Hyrule Warriors series is basically The Legend of Zelda meets Dynasty Warriors. It’s a collaboration between Koei Tecmo (creators of Dynasty Warriors) and Nintendo in a 1 v 1000, hack-and-slash world. You play one of a handful of characters and throughout the game, you fight through hordes of enemies (Bokoblins and otherwise) in order to complete missions.

While you start off as Link (because of course), you’ll unlock characters as you go along the game, almost one per chapter. You’ll get to play with all four Champions, Impa (yes) and even Zelda herself (seriously). All the characters are controlled in the same way although each of them have their own special abilities which help keeps the gameplay interesting.

Plus, the addition of weapon upgrades including the concept of seals (weapon augmentations). These allow you to customise your weapons according to those available from the weapons that you’ve collected during the main missions. 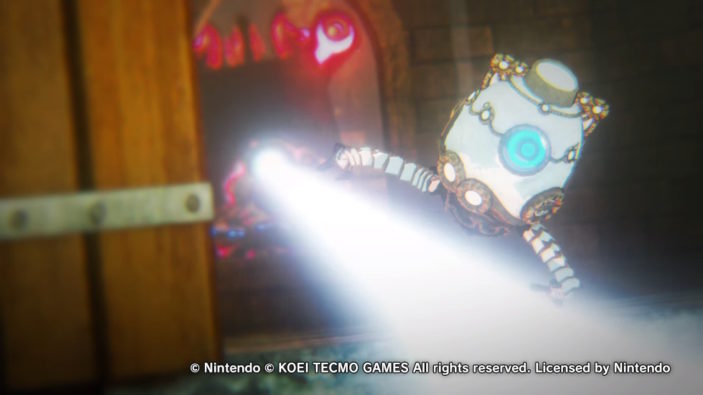 Age of Calamity is set in the past, where a little baby Guardian decides to jump back through time to try to stop the events of the Calamity. You do sort of learn the origin of the Towers, but otherwise, the story hasn’t really expanded much from what we already know from Breath of the Wild and it’s DLCs. Calamity Ganon is bad, he’s coming to get ya, and the Divine Beasts can do a helping but you need to find some Champions to help pilot them.

The main hub for the Age of Calamity is the map of Hyrule. From there you can select whichever mission you’d like to embark on first, or perhaps spend a bit of time with the denizens of Hyrule in side-quests. Although you don’t play an active role in side-quests, you’ll only be able to complete them using the various items, bugs, and foods that you’ve collected throughout the main missions. Some side-quests will grant you new recipes which give you stat boosts during missions, some will unlock various shops where you can buy and sell stuff or the blacksmith, where you can upgrade the heroes’ weapons.

From the map, you’ll also be able to take part in “Battlefield” missions. You can practice your Sheikah rune skills here, or get used to the various playstyles afforded to you by the heroes you unlock. While these side-quests don’t do much for adding to the story, they help you heaps by levelling up your characters, upgrading their combos, and giving them extra Hearts. Straightforward? Yes. But it’s soo much less of a hassle compared to having to search high and low for Shrines to get Spirit Orbs then find the nearest Goddess Statue, that’s for sure. 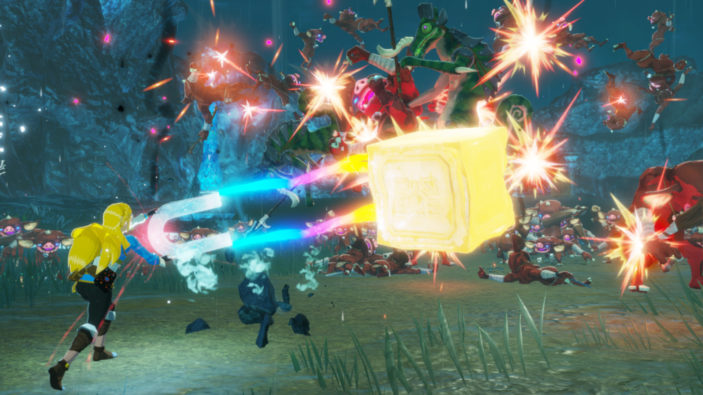 And I really mean it.

I’m not much of a grind and grind and grind kind of gal (as you may know from my Snack World review), so I did feel Hyrule Warrior fatigue after about an hour of play. But I appreciate the game adding different characters in almost every chapter. I think if that didn’t happen, I would have stopped playing a lot earlier than I ended up playing.

And with the way that enemy lock-on only targets large monsters, you have to keep manually adjusting the camera as you’re fighting. It became super annoying. Thankfully, I hadn’t once gotten in trouble since regular enemies are quite slow to attack when you’re near them. It would have been great if there was an option to set the camera for automatic panning. At least let me target other enemies too.

Much to my surprise, I sort of enjoyed Hyrule Warriors: Age of Calamity. I find myself choosing it over other games recently. It’s a great game to “switch off” to, in a matter of speaking. Plus, there’s a two-player mode available for sharing this hack-and-slash experience with a friend.

The baby Guardian is pretty cute, though. If Nintendo doesn’t make a plush of it and sell it at the Nintendo Store, then they’re really missing out on an amazing sale. Hit me up, Nintendo – I’ve got plenty more good ideas for you.