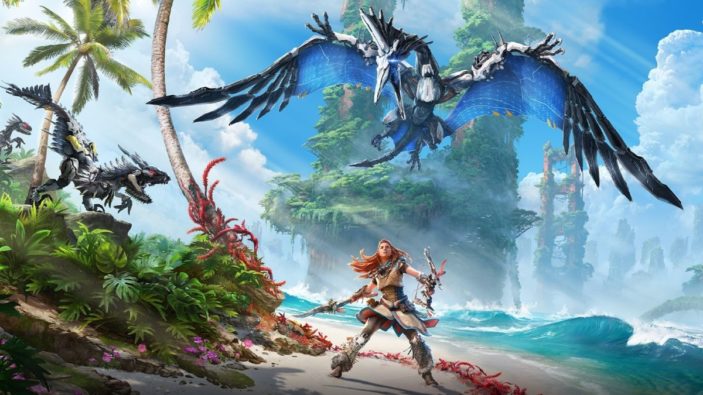 The Horizon franchise has returned with great anticipation, continuing the story of one of the most successful and beloved PlayStation exclusives of the last generation. With that being said, Horizon Forbidden West is well on its way to becoming the fan-favorite of both last generation and next-generation PlayStation owners alike, presenting an intriguing narrative, functional gameplay, and one of the most beautifully crafted open worlds ever featured in a video game. While it plays its cards close to its chest, it might not be enough to draw those who weren’t a fan of the first game back into its web; but those who are willing and ready might just be treated to the best game released on the PlayStation 5 so far.

Horizon Forbidden West picks up where the last game left off. Unfortunately, explaining the brief plot for the sequel involves minor spoilers for Horizon Zero Dawn; you have been warned. Aloy is back and hunting for Gaia, the A.I. program responsible for the creation of the various robotic creatures that roam the land, one which set her upon her original quest. With Gaia destroyed, Aloy has discovered that there may be a single remaining backup of Gaia; one which would help put an end to the corruption that lies within Gaia’s programming. To make matters a little more complicated, Aloy is soon embroiled within a plot of warring factions in her bid to cross over into the Forbidden West to uncover who is truly behind the curtain and what lies beyond; and if it is truly the answer to all her burning questions. 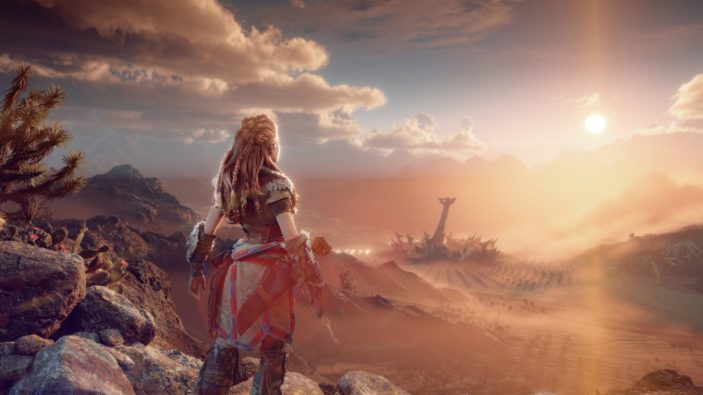 Aloy’s personality this time around has been given a slight rework. While she is still the young, capable, and inquisitive protagonist of the first game, her ambitions here are quite clear; and so is her demeanor. Very early on, much of Aloy’s light-hearted nature is stripped and replaced with a burning desire to progress on her quest. While I won’t spoil her own emotional arc, which does transpire throughout the progression of the narrative, I can say that this takes a small toll on many of the interactions with new and returning characters alike, in which Aloy barely spends time addressing the needs of others, unless you, the player deem it so. However, her incredible focus does stand as the driving point of the narrative and sets an incredible pace throughout many of the explosive and cinematic main missions, which do bring out some impressive motion capture and voice performances. The narrative admittedly takes its time setting Aloy on her journey, but once players step into the titular Forbidden West, all bets are off. New and familiar faces all play a toll on the narrative and the development of a few particular supporting characters elevate and craft the story in such a way that pulls a few heartstrings, as it does get the heart racing.

The sprawling landscape provides one of the most diverse, varied, and consistently gorgeous open worlds in a video game to date. Every nook and cranny is subject to an incredible amount of detail, with a vibrancy that adds true meaning to the implementation of Photo Modes in gaming. You’ll more than likely catch yourself gawking at the impressive draw distance and expansive horizons more than once. Much like Horizon Zero Dawn, you’ll encounter multiple environments from desolate plains to snowy mountains and lush jungles. The world itself, however, is not complete without its friends and foes. 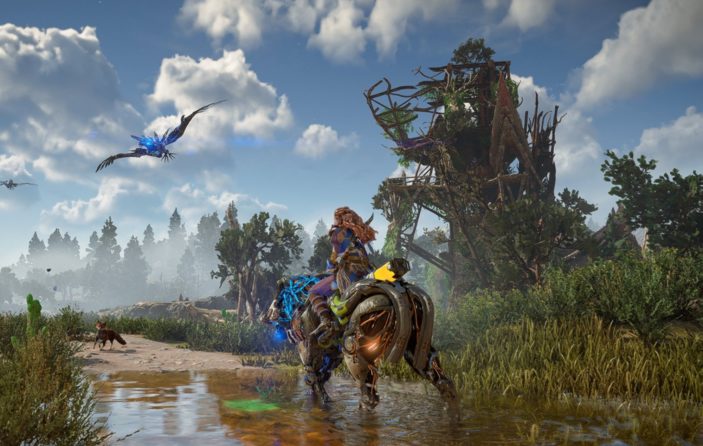 Along the way, you’ll encounter many engaging characters, each with their own story to tell and a helping hand to lend. While these moments give way to occasional exposition dumps, it’s clear that the world of Horizon Forbidden West is both larger and deeper than it has ever been. Context is everything, and world-building plays a huge part. Dialogue choices allow players to squeeze a little more juice from the surrounding characters, but if that’s not your thing, conversations rarely hold you back from continuing on your way.

While the world itself is begging to be explored, what good would it be if it were a chore to traverse? Thankfully, Aloy is agile and intuitive, thanks to some smooth and functional, if a little basic, climbing controls. Climbing points might still bear the obvious yellow paint to hint at accessible spots, but the fact that there are so many placed around each environment only highlights a level of diversity and verticality that improves on its predecessor with great confidence. Throw in the ability to mount new and familiar beasts, along with a glider and grappling hook for those hard-to-reach places, you’ll find yourself exploring every corner on a consistent basis.

Combat is in many ways a natural progression of the controls and mechanics introduced in Horizon: Zero Dawn. Aloy once again wields her trusty bow and staff, with a range of new and returning traps and toys to experiment with. Various arrow types can be crafted and traps can be set to get the better of unsuspecting enemies. While the first game prided itself on discovery and research, Horizon Forbidden West deems it necessary. Players must utilise Aloy’s Focus vision at every turn, scanning enemies to discover elemental weaknesses and weak points, which must be consistently exploited in order to gain the upper hand. While I wouldn’t go as far to label the game difficult, you’ll have a hard time taking down enemies with either straightforward or repetitive approaches. The combat itself is functional at first, but melee combat finds much more of its depth later on in the experience thanks, thanks to a wide range of handy upgrades and skill trees. 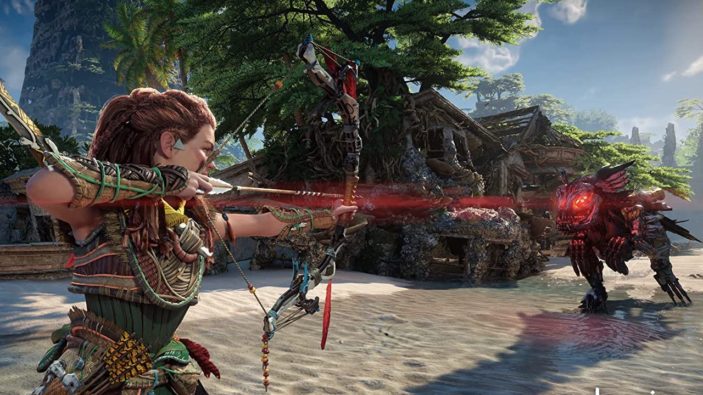 Much like Horizon Zero Dawn, Aloy can earn skill points to unlock perks and abilities across six separate skill trees dedicated to various mechanics and aspects of gameplay. From increased damage and fresh melee combinations to added value in crafting and gathering, your playstyle is anything but limited to one particular approach. Skill points are easily and consistently gathered through general combat and gameplay, making progression itself constantly rewarding. While you will get the chance to spread your points across each skill tree, I personally recommend dedicating your playstyle to two or three specific trees for the best results. However, throughout its 25-30 hour story, you will get through a fair chunk of each tree, should you decide to distribute your points evenly.

Simply put, Horizon Forbidden West might just be the best-looking game on the PlayStation 5. That being said I can’t help but feel some adjustments and restrictions were placed on both scope and performance in order to maintain consistency across both generations of consoles. Impressive draw distances create an unparalleled sense of scope within the open world. I lost count of the times I stared out into the distance and thought to myself, “I could actually go there”. Running at a consistent 4K resolution at 30 frames per second in Fidelity Mode on the PlayStation 5 was a real treat, with HDR truly allowing both colours and textures to pop. If a buttery smooth frame rate is your thing, you can also activate Performance Mode, which drops the resolution while locking in 60 frames per second. Both facial animations and general motion capture are top-notch, with the slightest of reactions and expressions adding context and weight to each performance. Once again, the DualSense controller adds a layer of immersion through the slightest of vibrations, from rain droplets overhead to beasts stomping in the distance.

You might have noticed I had nothing to pick at in Horizon Forbidden West, and that’s because there really isn’t anything. Too often did this sequel present consistent variety and quality through its gorgeous open world, functional gameplay mechanics, and nuanced story. Horizon Zero Dawn was a fantastic game in its own right, but Horizon Forbidden West constantly reminds players that it’s convinced on creating a broader, deeper, and more accessible sequel that rivals some of the best action-adventure games in the business. Developer Guerilla Games have crafted something truly special here, and they should embrace that anyone who picks this up, is sure to have a blast.