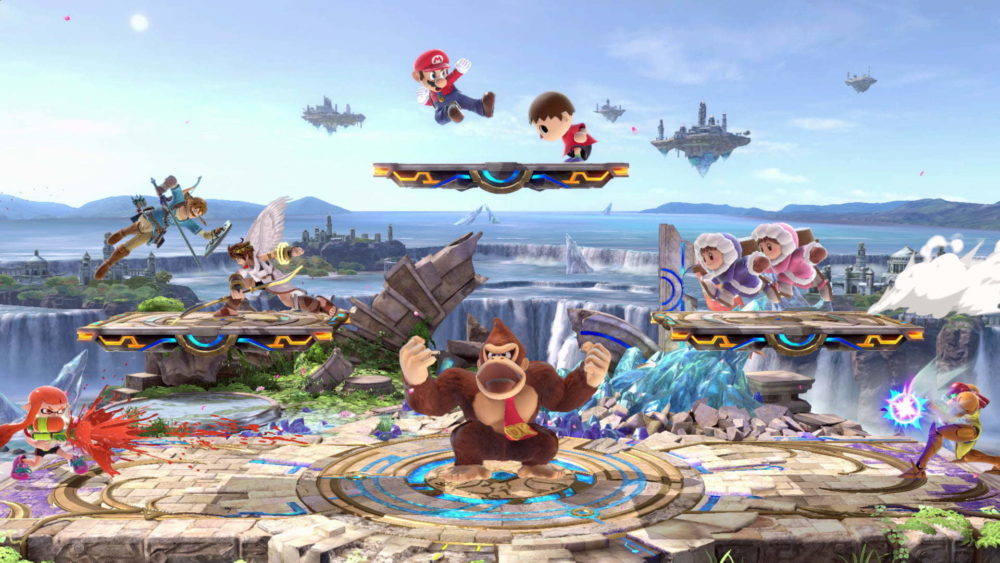 It’s been 20 years since Masahiro Sakurai became the architect of one of the riskiest experiments in Nintendo’s history. Super Smash Bros‘ dramatic origin story is well known — Sakurai had an idea for a four-player fighting game featuring Nintendo characters.

Sakurai was acutely aware that getting Nintendo to approve a game about their beloved characters beating the hell out of each other would be nearly impossible. If this was going to work, he needed to frame his idea the right way. To bring his idea more in line with something he thought Nintendo might go for, Sakurai’s design blueprint softened or subverted many of the fighting game genre’s more violent tropes — no blood, no health bars, and a reorienting of the goal from knocking someone out to knocking them off the level.

He spent weeks building the original prototype in his own time, a single level and four characters — Mario, Fox, DK and Samus — before presenting it to Nintendo. Industry legend insists that the pitch meeting quickly became an atypical Smash Bros match, with executives gleefully celebrating their victories and smack-talking amongst themselves. I hope with my entire heart that this is true. The game had proven its viability and Sakurai got his green light.

Super Smash Bros Ultimate is the closest a video game has ever come to embodying the phrase “throwing in the kitchen sink.” Every fighter, every level and every piece of music from the series’ twenty year history since that fateful pitch meeting is represented, with the vast array of stages already unlocked. The game, in a nod to the old guard, starts players with the eight base fighters from the N64 original — Mario, Donkey Kong, Fox, Samus, Pikachu, Kirby, Yoshi and Link. From there, the game throws a new unlockable character at you every for every ten minutes (or so) of actual match time you put in

The parade of new characters goes on so long you will start to wonder if they’re ever going to run out. They do, but not before you unlock seventy of them or so, many from previous Smash Bros. games and a few like Castlevania‘s Simon Belmont and Donkey Kong Country‘s King K. Rool who are entirely new to the series. What’s more, Nintendo have promised a further six fighters will join the roster over the next year, starting with Joker from Persona 5 who is part of the game’s DLC Fighters Pass and Super Mario Bros.’ Piranha Plant, a pre-order bonus character who will arrive in February. 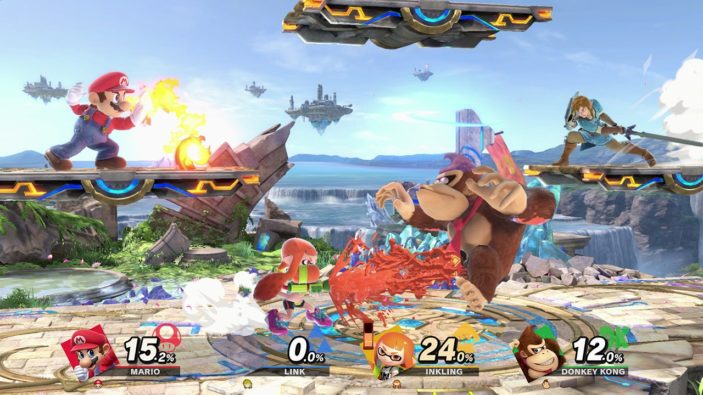 Long-time players will notice a few changes here and there. Most returning characters have seen only minor tweaks and are much the same as they’ve always been, but there are a few, like Link, that have undergone a more substantial reworking. Link has been altered to bring him more in line with the Breath of the Wild version of the character. His dash is faster, the range on his sword is slightly longer, the boomerang is finally back, his bombs can now be detonated remotely and he no longer has a hookshot/clawshot meaning the days of ranged grabs are over.

Regardless of character changes, battles remain as chaotic as ever. Items rain from the sky, explosions and morphing levels disrupt the fight at inopportune and unexpected moments, and many battles come down to a 1v1 in which smart, swift maneuvering is essential. If I have a complaint about items it’s that assist trophy fighters last an unbelievably long time once popped. They fly around the level and harass you for what feels like a full thirty to forty seconds but it feels like an eternity. There’s no other summonable item in the game that is as powerful or lasts as long as the assist trophies and they were one of the first items I turned off because, quite frankly, bugger that. Sakurai-san, pls nerf.

As is now the standard for Smash Bros, Ultimate comes loaded for bear with modes and mini games to try out. The crown jewel of these modes is the game’s new Adventure mode, World of Light. A sprawling story that sees an invading force of Master Hands capture the entire Smash Bros cast and create evil clones from their comatose forms. The sole survivor of this catastrophic event is HAL Labs’ own first born son, Kirby. With no-one left to help him and nowhere else to turn, it’s up to tiny, squishy little Kirby to rescue his friends and save the Smash Bros universe as we know it.

The mode has you fighting clones of the entire cast on your way to unlocking trapped fighters. Each clone is empowered with various Spirits. Spirits are essentially power up cards bound to characters from other games. Each spirit has a particular tier — companion spirits grant significant bonuses and tilt your current fighter towards a particular spirit type while secondary spirits add up to three further combat or level modifiers like “ranged attack up” or “immune to strong winds.” Spirit types work in a rock-paper-scissors type sequence, making it harder to be powerful against everything, and each can be leveled up to 99 for proper upgrading. You’ll need to change up your Spirit roster regularly to deal with each situation World of Light throws at you. I played through this mode with a couple of friends who are avowed ARPG fanatics. The two of them put their number crunching minds to the task and had broken the game wide open within about four or five hours. When Kirby’s Up+B attack can deal 60% damage with a single direct hit, you know you’ve crossed a line.

There is also online multiplayer for those who want to venture into that haunted arena. The online component has everything it needs to succeed, but it was one of the few areas that felt like perhaps it still needed some work. It was hard to find a match that wasn’t terribly laggy and even harder to get a game that was evenly matched. Give it some time, I live in hope that Nintendo will work on it. There’s plenty of fabulous couch co-op action to be had regardless.

Super Smash Bros Ultimate stands a monument to the weird little fighting game that could, a victory lap commemorating the 20th anniversary of a bloody good idea. It functions as a Best Of compilation while introducing more than enough new elements to have its own identity. It’s just so damned good. It isn’t merely everything fans have ever wanted in a Smash Bros title, it represents almost every significant change the series needed to make in order to grow and improve.

What an achievement. Sakurai and his whole team should be proud of themselves. Super Smash Bros Ultimate is their masterpiece.

Review conducted with a retail code provided by the manufacturer.