Games Review: 2064: Read Only Memories INTEGRAL is a clunky, modern twist on a classic formula

There was a time when point-and-click adventures ruled the roost, with companies like LucasArts churning out hit after hit between Maniac Mansion, The Secret of Monkey Island Grim Fandango and Full Throttle.

Since the 1980s, video game technologies have advanced unbelievably, opening up a diverse range of options for gameplay, allowing sprawling open world adventures and photorealistic graphics.

Despite this, the fascination with replicating classic point and clickers continues, with many indie developers turning back to the medium in the hopes of recapturing a time when video games were simple, magical fun.

2064: Read Only Memories is one of those games, weaving its story with 80s style pixel art and gameplay, but combined with cheeky modern sensibilities. The latest iteration of the game, INTEGRAL, actually released in July of last year for the Nintendo Switch, but it’s finally made its way to Australian and New Zealand shores. 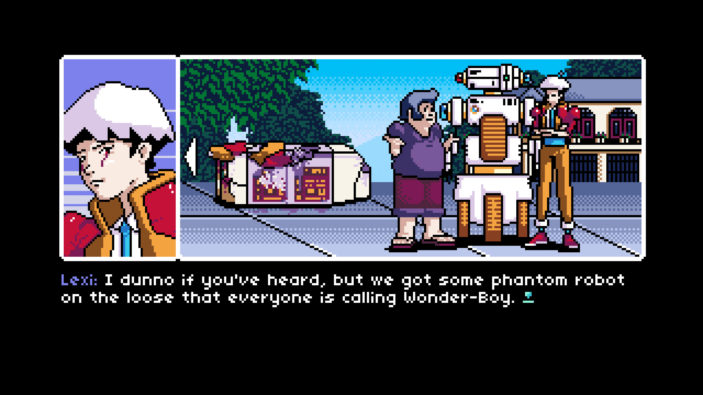 For those who’ve played the original game, 2064: Read Only Memories INTEGRAL is a slight upgrade, containing every downloadable content chapter and upgrade to date. It also includes a new side story, PUNKS, and a bunch of features that you probably won’t ever need – a soundtrack, game trailers, and an art gallery. Still, they’re nice to have.

2064’s story has obvious roots in the cyberpunk genre, and features the tale of a young journalist living in Neo-San Francisco as they’re sucked into a world of technology dependence, body modifcation and mysterious disappearances. The themes it tackles are deep and affecting, but has a tendency to slip into cliché – an issue that plagues much of the cyberpunk genre.

As the unnamed protagonist, you’re tasked with investigating the disappearance of engineer Hayden, who’s tangled up in issues that unfold over the course of the game. There’s evil corporations, an endearing robot named Turing and a semi-totalitarian police force that should be familiar to fans of the retro-futuristic genre. In short, the ideas presented are nothing new. 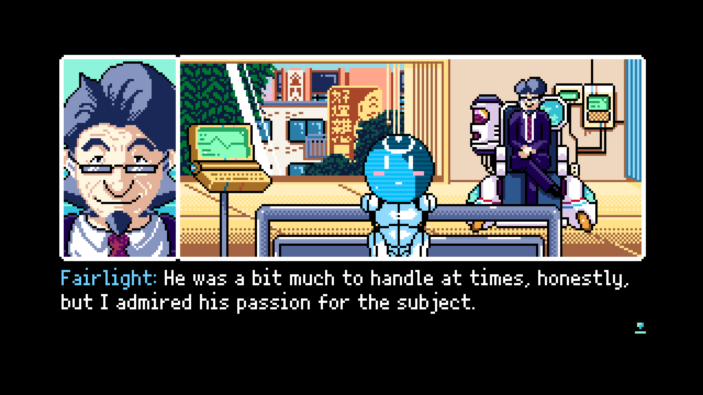 In your travels, you meet a colourful cast of characters, including hacker TOMCAT, cat-gene hybrid Jess and detective Lexi, each of which have personality enough to overcome many of the stereotypes placed on them. As the tale plays out, its these characters that shine and help to build out issues of gender, race and discrimination as they manifest within Neo San-Francisco.

Gameplay is, as mentioned earlier, directly inspired by classic point-and-click adventures from the early 1980s, and when playing on Switch, this system is just as clunky as its ever been. In handheld mode, players are required to manually flick through items onscreen, a process that is increasingly more frustrating the longer that you play.

While it would be easy to chalk this up to personal bias, I love point-and-click games – there’s many among my favourite games of all time. But something’s been lost in the transfer to Switch, and with items taking an age to select, my interest and enjoyment dropped significantly.

Despite all my issues with the game and all its clichés, there are some bright, shining spots. This includes the stellar cast of voice actors, who many will recognise from Telltale Games’ blockbuster narratives.

Melissa Hutchison plays Turing, the adorable robot that guides you through the game, while Telltale veterans Erin Yvette and Adam Harrington put in similarly great performances as TOMCAT and Fairlight. As a late addition to the original iteration of the game, it’s a welcome one, and adds much to the story. 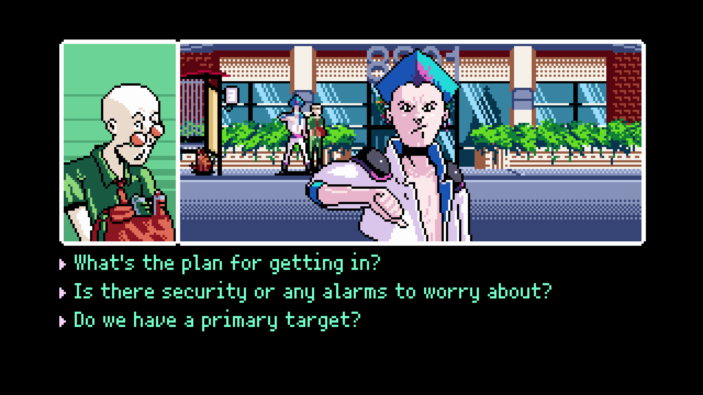 As far as the graphics go, its pixel art style is neat and refined, doing well to illustrate the tech leanings of the game’s world. Characters are, for the most part, intriguingly designed, but again, it faces issues with descending into cliché. Lexi, for example, would look right at home in Cowboy Bebop or any other futurist anime.

2064: Read Only Memories INTEGRAL didn’t quite resonate with me. While the tale and mystery it presents is intriguing, and the cast of characters wonderful; the game feels held back by its control scheme and dedication to tropes that have been left in the past for a reason. Its vision of the future is well-worn, and while it should be commended for its diverse cast (a rarity in gaming), it doesn’t do enough differently to make it feel truly essential or unique.