Ukrainian developer 4A Games have spent the last decade doggedly chasing the perfect adaptation of Metro, Dmitri Glukhovsky’s series of post-apocalyptic science fiction novels. In Metro 2033 and Metro: Last Light, 4A gave it everything they had, attempting to execute on their vision with the tools and funding at their disposal. They met with differing degrees of success but the vision was always clear — a medium-burn survivalist adventure that puts planning and exploration ahead of run-and-gun combat. This earned the series a cult following, a hardcore few who enjoyed its bleak and sometimes fiddly approach to survival gameplay.

Based on my short time with Metro Exodus, it feels like the series has everything it needs to succeed at last — provided it can get out of its own way. 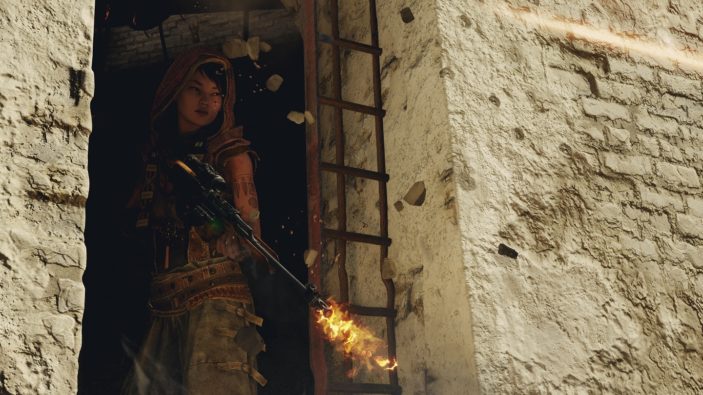 My four hour preview was divided up into three levels — The Volga, The Caspian and The Taiga. The Volga is Metro as you know it — scavenging what you can from a frozen, raider-ridden Russian tundra while dodging the bizarre mutated creatures that live below surface. The Volga sees your character, series hero Artyom, and living with a rag tag team of survivors aboard an old retrofitted train called The Aurora. The level had me speaking with the crew before finding my way into a boathouse overtaken by a cult that shunned electricity as a sin. It was here that Metro: Exodus quickly reminded me that though it wears the trappings of a first-person shooter, it was much more comfortable with a sneak-softly-and-carry-a-full-backpack approach. My first time through the level, I swung into the boathouse guns blazing and quickly met a grisly end. I died a few times throughout my preview session, and it was almost always because I provoked the local yahoos into a gunfight. Artyom isn’t the world’s greatest marksman, even when using aim-assist on console. Couple this with the overall scarcity of ammunition and you’ll quickly fall into the habit of avoiding conflict.

My initial thought when I saw them all riding on a train was of the 2013 film Snowpiercer, all squeezed into its many cars as a refuge against the ice-covered world outside, always moving, hoping for salvation. Unlike Snowpiercer, Metro Exodus moves its characters through numerous biomes beyond the snow and ice. The Caspian, the second level we were shown, features a storm-ravaged desert in which survivors battle the elements and huddle within a few makeshift towns. Elsewhere, roving Mad Max road gangs gobble up the remaining resources. Before the war that killed the earth, this area was the Caspian Sea, the huge inland body of water that borders Azerbaijan, Iran, Turkmenistan, Kazakhstan and Russia. 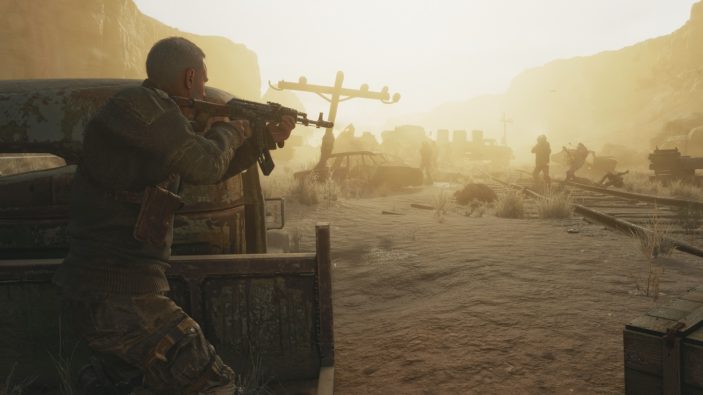 After scrambling to find cover from a sandstorm and climbing to the top of a nearby lighthouse, I found myself delving beneath the surface and back into the kind of claustrophobic spaces the original Metro 2033 excelled at. Spider enemies injured only by the light of my torch scuttled in and out of view, continually getting underneath my field of vision and forcing me to backpedal to keep the spotlight on them. This underground section was where it felt like Metro Exodus was moving back towards its horror roots and away from its broader adventure. It also threw into sharp relief how fiddly the game’s controls still were.

I had to bump the average look sensitivity on the Xbox One controller I was using up quite a way as the default felt a touch sluggish, and I still found that I had trouble tracking enemies even with aim assist on (though there is a persuasive argument to made that I am a terrible shot). Having to switch between weapons and items as you manage a situation is fraught because it requires two or more button presses to accomplish. Torch goes out and you’re surrounded by spiders in the tunnels? You’re not going to have enough time to pull out your battery, pump it back up to full charge and then switch back to your flashlight so prepare to get mauled. It’s likely this won’t be such an issue on PC as I’m sure everything will have hotkeys but on a console it presents something of a problem that affects both UI and controls. 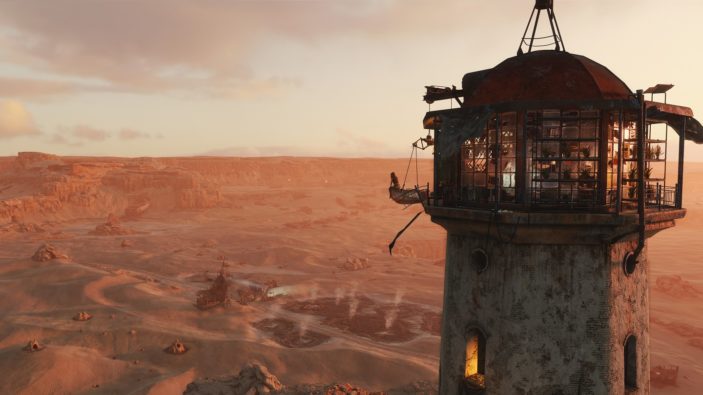 It certainly creates the sensation of riffling through your backpack as danger looms but at the same time, I’d like to be able to deal with enemies in a way that doesn’t feel like I’m falling all over myself. There was also the fact that the tunnel spiders had no lead time between retreating from the beam of your flashlight and coming back for more. The moment they were out of the light, they turned around and scuttled right back into it. This lead the AI into a strange loop — I would stand at the end of a hallway and the spiders would scuttle out, enter the light, panic, hustle back into the dark, realise the light was gone, scuttle out into the light again and so on. I get it, they’re bugs and not terribly smart. But still, are they so determined to eat me that they’re not gonna think twice before straight back into the thing that hurt them only a second ago? I want to give 4A the benefit of the doubt here — our preview was conducted on pre-release code so I hope they’ll have time to fine tune this behaviour ahead of launch.

The third area was The Taiga, a forest biome that featured woodland tribes, roaming wolf packs and at least one huge goddamned bear that scared the bejesus out of me. My first encounter with the local tribe (who sounded a bit Scottish?) was not ideal. As I went to cross a wooden bridge into a village, a camouflaged warrior dropped into my path from a tree branch above. “AVAST!” he shouted, “You–” 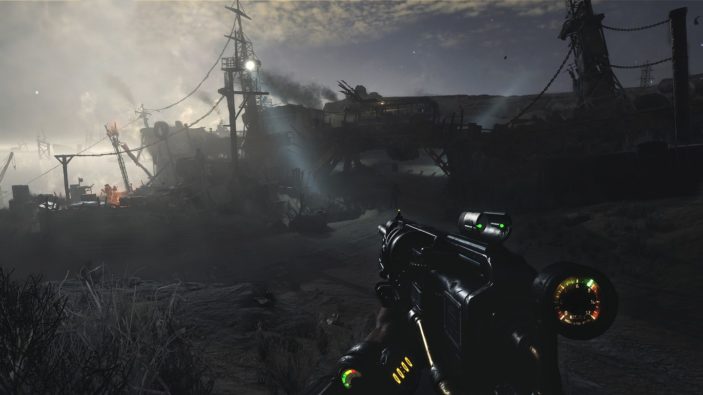 This was as far as he got. The sudden movement of him leaping into view had startled me and in my panic I’d shot him through the throat with a crossbow bolt. Rather than seeing this for the horrible accident it was, the whole village took a dim view of my actions and five more guys dropped out of the tree like green berets to bash me up. I managed to muddle my way through the fight but it cost me a lot in resources and I didn’t really gain anything from it. Itchy trigger fingers won’t often lead to rewards in Metro.

Finally, I do want to touch on what appears to be the game’s most accomplished aspect: its visuals. As with previous entries in the series, Metro Exodus is gorgeous to look at. Running in 4K HDR on Xbox One X dev kits for our preview, it was clear why Microsoft had made a big deal about the game at its E3 announce. For PC players well-used to loading up Metro: Last Light as a hardware bench test, Exodus looks to continue the tradition. Everything feels intricately detailed — character models and expressions, simple environmental textures and even weapon models that illustrate the ad-hoc nature of life after the end of the world. It’s great stuff and I look forward to seeing more of it. 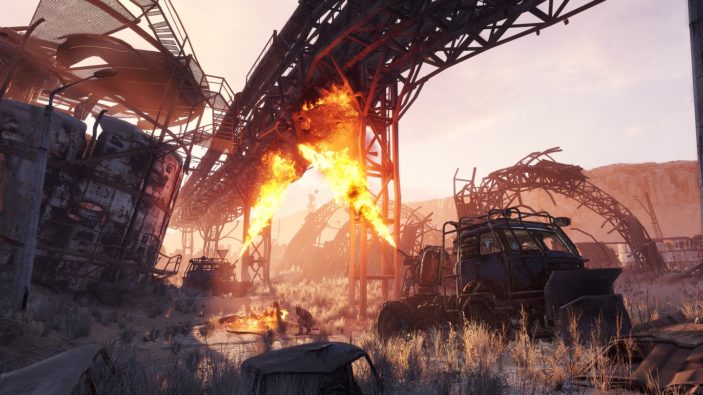 In total, my short span with Metro Exodus left me feeling good about where the series is headed. There are still a few areas where improvements could be made but on the whole, it feels like 4A are closer than ever to realising their long-held goal. I’m keen to go deeper when it launches next month.

Metro Exodus launches on February 15, 2019 on PlayStation 4, Xbox One and Windows PC. The author of this piece was flown to Sydney and provided one night’s accommodation for this preview, courtesy of Deep Silver.