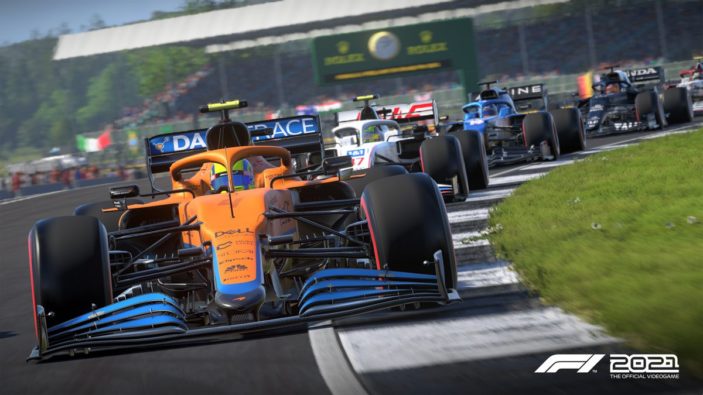 F1 2021 is the first game in the long-running Formula 1 racing series following EA’s acquisition of developer Codemasters. While the vast majority of the game retains the same look and feel of F1 games past, F1 2021 makes a few important strides toward accessibility that are in line with the modern EA Sports ethos.

Because this is a preview build there are things that we simply can’t cover because we haven’t got a completed build to base an opinion on. Take, for instance, strict corner cutting rules. I know corner-cutting registry and penalty accuracy is important to sim racing fans, but it’s still too early to get a clear idea of what has changed there. Driver AI is in a similar boat — it’ll be hard to tell for sure how good it is until we can get the completed review build in hand. Another change for F1 2021 is the new Braking Point single-player story. Unfortunately, none of the Braking Point campaign was playable in our preview build so, again, we can’t really comment on it.

What was playable were quite a few Career races, as well as single Grand Prix and Time Trial events. These were across a handful of courses — Bahrain, Melbourne, Baku, Barcelona, and a few others. Codemasters very much got the feel and shape of these tracks down a long time ago — F1 fans know them like the back of their hands — so nothing feels as though little has changed there.

Race feel and Practice, Qually and Race Day set up, however, has changed quite a bit. Where F1 2020 would have players running individual practice laps to check off key setup data in FP1-3, F1 2021 crunches everything down into three track-specific verticals, under which you have an array of smaller objectives to complete on each lap. I really like this change, it makes every lap feel more important because you’re gathering a lot of information quickly. It’s a smart tweak of the existing design and, I think, will be a boon to experienced sim racers and newcomers alike.

Race feel has shifted slightly from 2020. With the move to EA, Codemasters says it has completely rebuilt its tyre and grip model. You can feel this most keenly as you peel back the assists to the raw simulation level. It feels slightly heavier than last year, making it easier to feel out when tyres are wearing thin. Grip modelling has always been a fine line for Codies to walk — you want the player to be able to control the vehicle, but you also want them to feel like they’re driving the car on the limit. The player should feel like they’re pushing the ragged edge of what the tyres can do, even if they really aren’t. They should feel that way even if there are a hundred assists on and the car is basically driving itself. That knife-edge flirtation with disaster is the backbone of Formula 1 racing.

Speaking of assists, F1 2021 works very hard to bring new players into the fold. F1 might be one of the most impenetrable sports in the world, and so bringing new blood in isn’t easy. Netflix’s Formula One: Drive to Survive has been a godsend in this regard, but EA clearly feels they can take it further. The goal of every EA Sports game in the last five years or so has been to find a way to please longtime hard simmers while also luring in new players with more casual play. Myriad new and returning driver assists have been implemented so that players can tweak the experience to their liking

The biggest visual update, particularly for the new generation of console hardware, is that F1 2021 will take advantage of ray-traced lighting and reflections. This will allow each track to better reflect the real-world lighting of each circuit. Bahrain just feels different when you see the lights of the night race cutting through the dust and haze. The sense of oppressive evening heat really cuts through. Vehicle models look as sharp and lifelike as ever, with the updated 2021 season liveries looking particularly sharp.

The annual release pattern of sports titles can make it hard to see what has changed and by how much. The jump to a new publisher certainly makes that a lot easier. F1 2021 looks to improve on the best-in-class performance of its predecessors in all the ways die-hard sim racers want to see. It doesn’t want to scare new players off, however, and that’s to its benefit. We look forward to getting out hands on the full review build ahead of launch.