Book Review: Dive into a new YA fantasy with Bonnie Wynne’s The Ninth Sorceress 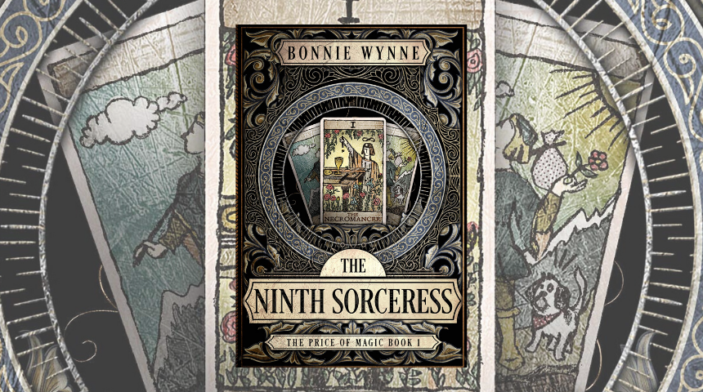 Gwyn is in a bad way. Imprisoned in the dungeons of the Clockwork City, visits from interrogators and torturers are becoming routine. But, then a wizard walks in with something she’d thought long lost. A memento from a life left behind. And suddenly the words start coming. Ascepis and his caravan. Lucian, the shapeshifter. Her teacher, Faolan. Idris. And watching over them all, the goddess Beheret, who has a worrying interest in Gwyn.

The Ninth Sorceress marks the first in a new series from debut author Bonnie Wynne. Rooted in fairly familiar territory for YA fantasy – a young nobody taking on an important role in a much larger scheme – the Price of Magic opener happily has a few tricks up its sleeve.

The writing is engaging and well paced, framed by the ominous knowledge that the story comes from a shackled Gwyn. A few characters fall a little flat, but others – particularly Lucian and necromancer Faolan – have immediate and lasting appeal. Gwyn, though, is undoubtedly the star. Her fears and self-doubt are relatable, even with their fantasy roots, and it’s a pleasure to watch her character develop throughout the novel. She’s a more than worthy addition to Talem Press‘ female focused stable, alongside Helen Scheuerer’s Bleak (The Oremere Chronicles) and Bronwyn Eley’s Kaylan (Relic).

But, where Wynne truly shines is in the creation of the High Country and the magical lore that binds it. From the trained wizards (or mancers) in their Clockwork City, to the born magic of Lucian and his people, Wynne has crafted a measured and exciting world, with so much still to explore. Her world-building is, quite simply, spectacular.

The Ninth Sorceress is a strong series opener, bolstered by great writing and a fascinating lead. And, despite knowing how the tale ends (or at least thinking you do), it does little to damage the journey you’ll take along the way. Another great effort from the Aussie YA community, The Price of Magic is a series to keep an eye on!

Bonnie Wynne’s The Ninth Sorceress will be released on February 13th by Talem Press.

You can also find our interview with author Bonnie Wynne HERE