Book Review: Clarissa Goenawan’s The Perfect World of Miwako Sumida is a novel that examines a tragedy from three sides 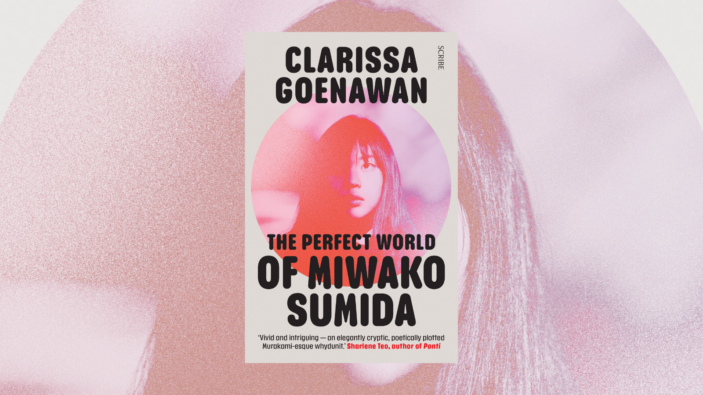 Clarissa Goenawan‘s second novel The Perfect World of Miwako Sumida may tread familiar ground for her fans. While Goenawan is an Indonesian-born Singaporean writer, both this and her debut novel Rainbirds are set in Tokyo. Perhaps it is only fitting, then, that Sharlene Teo compares Goenawan’s writing to that of Japanese writer Haruki Murakami, calling this novel a ‘whydunit’ in her quote on the book’s cover.

A slightly more direct comparison is Anna North‘s 2015 novel, The Life and Death of Sophie Stark, in which a character is examined from multiple perspectives by those who knew her after her death, but is never allowed to speak for herself. This synopsis could be applied to both novels without alteration, and it’s not a spoiler to make such a comparison. The suicide of Miwako Sumida is contained in the first line of the book’s blurb.

The Perfect World of Miwako Sumida comprises of three parts. The first, told in first person, is in the voice of Ryusei Yanagi, a young man who meets Miwako on a group date with some college friends, and finds deep companionship with her. But despite his repeated attempts to make Miwako his girlfriend, he is repeatedly rebuffed. Hopelessly in love with Miwako, he recounts their time together, and especially the time the two of them spent working with Ryusei’s older sister Fumi, called Fumi-nee (meaning older sister.)

Miwako quickly understands not only that Fumi is a transgender woman, but connects with Fumi’s way of thinking about her place in the world and her feelings about herself on a level that Ryusei had previously been unable to comprehend. This uncanny ability to read people as she reads romance novels, as well as her sometimes startling bluntness, are some of the things which attract Ryusei to Miwako. At times, however, the attraction he feels to a woman who is described as plain, prickly and unpleasant feels inauthentic, and only feeds into the manic pixie dream girl trope.

The second and third points of view in the novel are told in third person. The second section is from the point of view of Chie, Miwako’s best friend from high school. It covers the trip Chie and Ryusei take to visit the last place where Miwako went. Chie also recounts the origins of her friendship with Miwako, taking the reader into a slightly voyeuristic space where schoolgirls write and publish anonymous diaries.

Chie and Miwako are both writing such diaries, and each one of them has a public persona and a diary persona. But, while Chie finds that she has begun to morph into the more popular and outgoing Chiyo personality that she has been writing, Miwako’s public face is the one which is false, as she is hiding a dark secret. It through Chie’s eyes and later, through the eyes of Fumi-nee that the reader begins to piece together what this may be.

The inclusion of Fumi-nee as a narrator is an odd choice, given she hardly knew Miwako other than as her brother’s friend. It is in this portion of the book where the Murakami comparison makes the most sense. Taking on an almost magical realist tone, Fumi-nee’s section oscillates between the weeks after Miwako’s death, as a young man named Eiji turns up at her studio, and her own school days which run in parallel to Chie and Miwako’s own. Themes of identity, the legacy of bullying and family come together in this final section, and strengthen the overall meaning of a book which often treads familiar ground.

Ultimately very readable and enjoyable, this is a novel which is occasionally let down by stilted and false-sounding dialogue. Dealing with trauma, abuse, suicide and gender dysmorphia, The Perfect World of Miwako Sumida will not be for everyone. But, will be sure to find some readers who love it fanatically – particularly among those who love authentic Japanese settings.

Clarissa Goenawan’s The Perfect World of Miwako Sumida is out now, published by Scribe Publications.

Grab your copy from Booktopia HERE.