Science fiction and fantasy writer Maria V. Snyder dropped not one, but TWO books this year – Chasing the Shadows, the second in the Sentinels of the Galaxy series, and the (currently) Australia-only The Eyes of Tamburah!

We were lucky enough to grab five minutes with the prolific author to chat about her latest work!

Let’s jump straight into Sentinels of the Galaxy and Chasing the Shadows! Can you tell us a little about where we’re up to in the series?

The story picks up soon after the events in Navigating the Stars. Lyra and the security team are dealing with stopping an unstoppable alien threat, and figuring out how to keep the murdering looters from taking over the Milky Way Galaxy. In this book, readers will find out more about the looters’ plans, why millions of Terracotta Warriors were installed on sixty-four exoplanets, and a few other surprises. 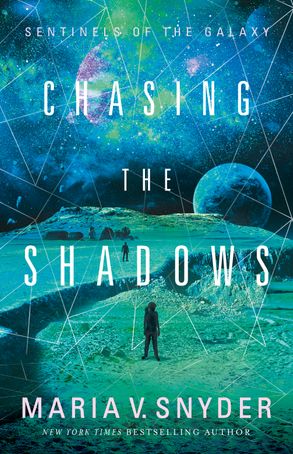 Where did the idea of combining the Terracotta Warriors with a science fiction story come from?

During a visit to China back in 2004, I learned about the Terracotta Army that was discovered near Xi’an in 1974. I was fascinated with them even though I didn’t get a chance to see them at that time. The fact the Emperor of China commissioned thousands of these life-sized warriors made of terracotta to protect him in the afterlife sparked my imagination. I wondered about the afterlife and why he needed protection. Was it populated with demons? Or other creatures? And what happens when a statue is stolen or broken. Did the army lose a soldier? Hard to fight a horde of demons when you keep losing your protectors. This interest stayed with me and when an exhibition of the warriors came to Washington, DC, I visited them. And then again when they came to Philadelphia in 2017. I’m happy to report that I just saw them in Xi’an, China a few weeks ago! It was incredible to see the scale of the pits and how much work they still have to do to uncover the rest of the warriors.

I had a short story idea about the warriors in my head for a number of years, but it never fully clicked into a story until I sparked on the idea of putting the warriors on other planets in our galaxy, which led to a number of science fiction elements, mysteries, and the cast of characters. Enough to write three books!

For a more detailed answer to this question, I wrote a guest blog post about it – you can find it here.

I could ask a thousand questions about Sentinels of the Galaxy but I’m going to limit myself to just one more! There’s a real authenticity (and heat!) to the blossoming romance between Niall and Lyra. Is it hard to make a romance seem genuine?

It is hard to find that right balance between two people as they embark on a relationship. I’m not a fan of insta-love, which happens in many YA books. Although I tend to do the enemy to lover trope in my books as there’s something about when two characters hate each other and then change their feelings that I enjoy exploring. Perhaps it’s the challenge of getting them to see the other in a new light. Many times in my books, I plan for certain characters to get together, and then they don’t. They chose other characters! Drives me crazy. But in this case, I’d planned for Niall and Lyra to eventually get together. 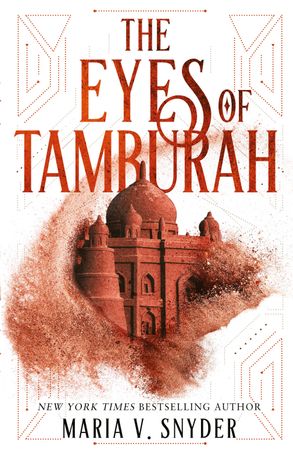 We also saw the release of The Eyes of Tamburah this year – could you tell us a little about that?

The Eyes of Tamburah is a traditional fantasy set on a world covered by a desert. Because of the extreme surface heat, the inhabitants of the world live in vast underground cities. Shyla, the main protagonist is just trying to make a living by helping the city’s archaeologist find lost temples that have been buried by the sand. But she’s soon accused of stealing the Eyes of Tamburah, two priceless artifacts rumored to hold magical power. She must find who the real thief is and recover the Eyes to clear her name.

You seem drawn to fantasy and science fiction in your writing. What is it about the genres you love? And do you have a preference?

I enjoy reading both science fiction and fantasy and have since I was in high school. It seemed natural to me to write in those two genres. They both have an unlimited potential for story ideas. If something in real life is impossible, I can make it possible by either using magic or advanced technology.

For example, in my Glass books, there are Stormdancers. They’re magicians that can harvest the energy from storms like hurricanes and bottle that energy to be used later. Hurricanes produce so much energy that, if we could plug into a hurricane, we’d have enough energy to fuel the world for a day (not an exaggeration – I did the math). This idea came to me when the US was struck by Hurricane Katrina. Over 3000 people died. And I thought if there was a way to siphon off that destructive energy, then all those people wouldn’t have died.

I enjoy the challenges that both genres present to me as a writer and don’t prefer one over the other. In all cases, the story idea dictates which genre I use. For example, it made more sense to have a food taster be in a world that has limited tech and magic than in a futuristic world.

I read in another interview you pump out two books a year! Given that you’re also a teacher and a parent, I imagine you’ve got a pretty solid routine in place?

The two books a year is fairly recent and that’s because my kids are no longer kids! However, I do have a routine in place. Ideally my day follows this pattern: I start writing around 10 p.m. and work until 3 a.m. I read for an hour and go to bed at 4 a.m. I wake up around noon and spend the afternoon either working on the business side of writing or critiquing my student’s manuscripts. I stop around 5 p.m. to have dinner with my husband and I take the rest of the evening off (until 10 p.m.).

When it comes to fleshing out your novels, you’re clearly dedicated to doing your research – why is it so important to you that you do that? And have you picked up any exciting skills or interesting tidbits of knowledge along the way?

Even though I’m writing fiction, I feel that if I’m going to use something that is real–like horses–then I need to get it right. I don’t want my readers to be jolted out of the story because I’ve gotten something wrong. I also like to do hands on research if possible because I feel that’s the best way to translate the experience to my readers. I can read that a glass kiln has to be 2600 degrees F to melt the glass, but just how hot is that? I’ve felt the heat from my oven, but that is only around 400 degrees. But to stand next to a kiln and experience that heat first hand adds those realistic details to my novels that enrich the reader’s experience and also won’t jolt them out of the story.

In doing research, I’ve gain lots of knowledge, but I’m not an expert in anything. I learn just enough to seem like an expert then I move on to the next thing. However, over the years, I’ve learned horses have a hierarchy and there are dominate alpha horses. That glass needs to cool down slowly or it’ll crack. That picking a lock requires a tension wrench and a pick. That correctional officers in prisons do not carry weapons. And that a person’s aim gets worse when adrenaline is pumping through their body.

A quick look over your website makes it very clear that you’re hugely grateful to your fanbase. You’ve even gifted us Aussie readers with our own release page! How important to you is it that you remain accessible to readers? And any upcoming plans to visit your fans Down Under?

It’s very important to me to remain accessible! I enjoy interacting with my readers and I answer all emails and comments. In fact, I’ve made some good friends through my interactions. I’m not on all the social media platforms, but I try to be very engaged in the ones that I am, which is Facebook, Goodreads, and Instagram.

I do have plans to return to Australia. There are rumors I might be there in June 2020 😉 Aussie readers need to keep an eye on my Australian page and of course my social media sites for official news.

My Facebook reader group, Snyder’s Soulfinders is the best place to get all the news and meet fellow readers. You can click here to join – make sure to answer at least 2 of the questions as we don’t want trolls in the group!

And, just for a bit of fun – what are you reading/watching/listening to at the moment? If you’ve got time between all that writing, of course!

I do have some down time. I’m currently reading Seven Years in Tibet, by Heinrich Harrer. I visited Tibet a couple weeks ago and I started this book before I left to get a sense of the place. As for TV shows, I’m way behind and have been watching shows that were out a while ago. Currently, I’m watching Criminal Minds. I find the criminal mind fascinating and if I wasn’t a writer, I’d be a profiler. Before that, I binged watched Supernatural! I listen to a variety of rock and alternate rock groups. Right now, I’ve been listening to AJR – they’re three brothers and I’m going to their concert in January with my daughter.

Our thanks to Maria for her time!

Chasing the Shadows and The Eyes of Tamburah are out now, published by Harper Collins.
You can find out more about Maria V. Snyder and her work via her website.

Tags: Chasing the Shadows, Maria V. Snyder, Sentinels of the Galaxy, The Eyes of Tamburah