Book Review: Where the Line Breaks is a thoughtful analysis of the ANZAC legend and those who create it 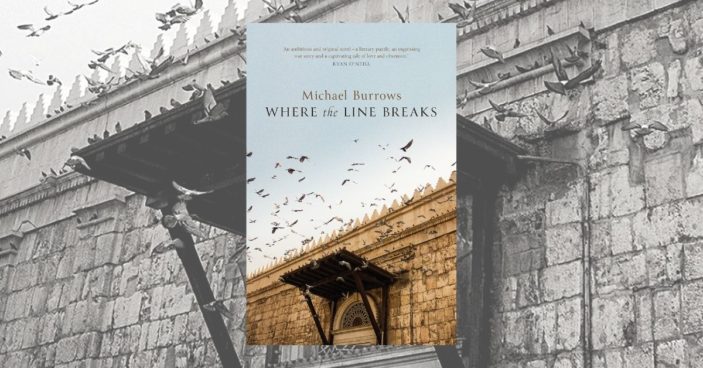 Shortlisted for the inaugural Fogarty Literary Award, Where the Line Breaks, the debut novel by West Australian writer Michael Burrows is stylistically a little out of the ordinary for Fremantle Press. For a start, a large part of the story is told in the form of a fictional PhD thesis.

Writing the thesis is Matthew Denton, a “starry-eyed Australian completing his PhD in London”. For most of his life, Matt has idolised Alan Lewis V.C., a war hero from W.A. who served in the 10th Light Horse, and whose heroic demise earned him the coveted medal for bravery. Matt is convinced that Lewis is the author of a series of poems which have been attributed to a figure known as ‘The Unknown Digger’ and he intends to prove it. But, as the increasingly personal footnotes to his PhD reveal, the stars in Matt’s eyes are obscuring the truth from him in more areas than one.

It’s hard to know how exactly to read Where the Line Breaks. As a student, I tended to largely ignore the footnotes in research books. To pick up a novel, where to not read them means completely missing a large part of the real story was a strange experience. Matt’s thesis looks at the thematic links between Lewis’s life and the poems written by The Unknown Digger; including the language choices, the locations where things have been written, and tries to refute all other claims by his peers as to the poet’s identity.

In creating Matt’s research, Burrows has used a mix of real and imaginary texts, as Lewis was not real but the exploits of the 10th Light Horse were. Lewis is based on a number of real figures and on the ANZAC legend itself. His own story, interspersed between Matt’s, gently teases out the hero worship often attached to wartime figures. The disparities between Matt’s worship of Lewis and reality critiques the false equivalence of those who receive medals being heroic and noble through and through.

In Lewis’s sections, from his days at the pub before the war with fiancee Rose and best friend Red, to training in Egypt and hospital in Lemnos, we see that Lewis and his compatriots are men – human, fallible, scared, and also become more and more fundamentally affected by the things they have seen and done. Burrows does an excellent job in these sections of evoking the feel of the time and place, bringing enough specificity to make the reader feel like they are there alongside the soldiers.

As for Matthew’s thesis, it isn’t particularly convincing, but then again, that isn’t really the point. Matthew has predetermined that he is right, and is shaping the evidence to suit his needs; something he does both in his academic and personal lives. His struggles to be taken seriously by his colleagues are mirrored by the ups and downs in his relationship with Em, a woman he meets whilst working at the University Library; and whose contradictions are the things Matthew seems to love most about her. That a woman who exists only in the footnotes of a thesis can feel so real is a real coup for her creator.

At times, the revelations of this novel are hard to decipher definitively, and much is left for the reader to intuit for themselves. Perhaps in an attempt not to be too heavy handed, the book had become a touch too subtle when it needed to shock. As this mirrors the nature of historical research – where the reader can only interpret from those facts they can uncover – this does not deter too much from the overall enjoyment of the novel. And, I am sure it will provoke a number of deep book club discussions, which perhaps was the intention all along.

Where the Line Breaks is a beautiful, ambitious novel, and while it takes a big risk stylistically, the disparate parts of the book are handled with great skill. The result is an instant classic, and a perfect read for those interested in World War One.

Where the Line Breaks by Michael Burrows is out now, through Fremantle Press. Grab yourself a copy from Booktopia HERE.