Book Review: Polly Phillips’ follow up is a twist-filled heart-stopper 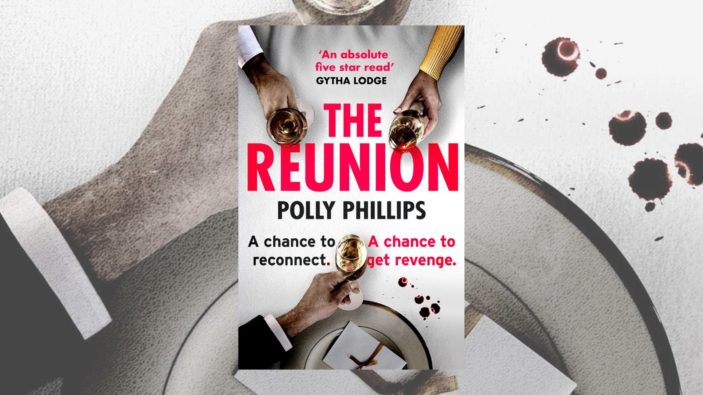 Told in a ‘then’ and ‘now’ format, The Reunion begins in media res with protagonist Emily fighting an unknown assailant for her life. It is the night of her Cambridge class’s fifteen year reunion. The chapter ends with a chilling line… “After what I’ve done tonight, I can’t blame them.” But what exactly is it that Emily’s done? Mistress of suspense, Phillips wants to leave her readers guessing until the last moment, and from there, the book is broken down into tiny morsels of information.

In the ‘Now’ sections of the book, there is a chilling count down at the beginning of each chapter. We learn that Emily is planning to release some information about some of her former classmates at the end of the night in retaliation for a betrayal which led to her early exit from the university. This decision has completely derailed the course of her life – Emily was once a star student, bound to read law and become a hotshot lawyer. But, after a traumatic incident at Cambridge, she failed to graduate and ended up working as a waitress at a pizza place.

Now, married to engineer Nick (also a Cambridge grad, but never part of Emily’s circle at the time), she is a homemaker and mother to twins. Her daughter, Artie (or Artemis), is currently being bullied by a so-called friend at school, which prompts Emily to remember how close she once was to her own tormentors.

The ‘Then’ sections of the book focus on Emily’s friendship with three people: her boyfriend Henry, his best friend Will, and Emily’s best frenemy, Lyla. While the others include Emily in their activities, she’s always aware of the wealth disparity between them. Lyla is able to buy designer clothing and is the only person on campus with a good camera-phone (it being the early 2000s and all), while Emily must make do with loans from her beloved sister Helen and watching every penny she earns. She’s desperate to keep up with her friends, so when Henry dumps her right before final exams, she’s completely blindsided.

The crux of the plot hinges on an incident which takes place after the breakup. Drinking to forget her heartbreak, Emily finds herself alone in a supply cupboard with Will, drinking whatever they can get their hands on. Believing Will to be interested in her sexually, Emily at first allows him to kiss her, and then changes her mind. Realising how drunk she is, Emily asks Will to help her get home.

But the next thing she knows, she’s waking up topless outside Henry’s dormitory building. Worse still, someone has taken a photo and posted it online. And everyone is willing to believe that Emily has posed for the picture in order to get attention. The knowledge that she’s been set up by her former friends and made a fool of prompts Emily to leave college early, failing to take her final exam, and thus flunking out of a college she worked her butt off to get into.

Phillips writes complicated relationships well, particularly those between women. She is adept at capturing the balance between loyalty and competitiveness which can often underpin close female friendships. This is the case with the relationship between Emily and Lyla. But, it also becomes apparent in scenes at the reunion when Emily is confronted with husband Nick’s former girlfriend, Liz, who has organised the reunion. She is also the master of the misdirect, and there are a number of twists and reveals about the cast of characters that you absolutely will not see coming.

Emily is both likeable and unlikeable – her younger self is desperate for the approval of largely unworthy friends, and she pushes away the help her sister wants to offer her. Her older self is full of bitterness and resentment over her lot in life. And yet, she’s prepared to fight for herself, and advocate for things to change.

If you’re looking for something quick and entertaining with a bit of bite, this is a great follow up to My Best Friend’s Murder and I can’t wait to see what Phillips writes next.

The Reunion by Polly Phillips is available now from Simon and Schuster AU. Get your copy from Booktopia HERE.