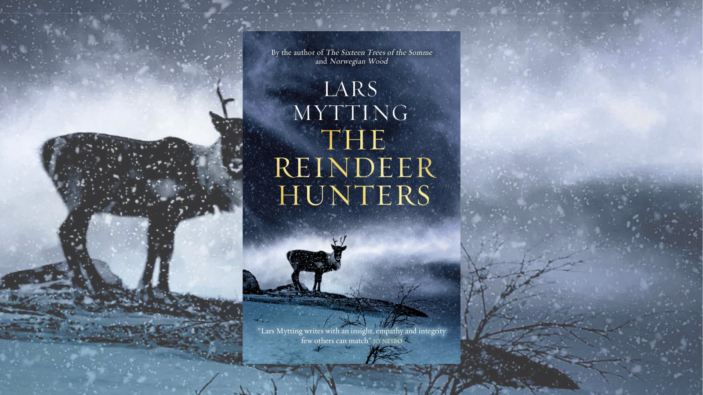 Norwegian author Lars Mytting and his English translator Deborah Dawkin transport readers back to the modest village of Butangen in The Reindeer Hunters, the second book in Mytting’s Sister Bells Trilogy.

If you haven’t read the first book in the trilogy, The Bell in the Lake, I heartily recommend you do so before starting on The Reindeer Hunters. The book picks up twenty-two years after the climactic events of the first book.

The story centres around a small cast of central characters, including the returning Pastor Kai Schweigaard, who is still tormented by his earlier actions. We are also introduced to Jehans – the son of Astrid Hekne, the central character from the first book. He lives on a modest smallholding, and when we first meet him he’s high in the mountains hunting reindeer. One day on a hunt he meets a stranger over the body of a reindeer buck.

The Reindeer Hunters, is in many way historical fiction on a grand scale. Beginning in 1903, the story unfolds over the course of a decade or more. It explores grand themes of love, sorrow, myth and nationhood. But, its focus is concentrated on Butangen, and its inhabitants. The village, becomes a microcosm for Norway at the turn of the twentieth century.

We, as readers, get to see the great changes of the early twentieth century though the eyes of the villagers; the arrival of electricity, Norway’s independence, a push for greater women’s rights, improvements in communication and travel, and the dark shadow of World War One feature throughout the book. There’s also a synergy between reader and character as, whilst we go through the COVID-19 pandemic, the villagers experience the worst of the Spanish Flu pandemic.

This is not a book of grand adventures and big events; but rather the story of everyday life, of the passing of the seasons, and importantly of survival. As the book progresses, and the years pass, that survival becomes incrementally easier. Life gets just a little more comfortable, until it doesn’t, until the sickness comes to the village. It is also, for all the changes that come through the village, a story that deals heavily in myth; with the mysterious Hekne Weave and the otherworldly Sister Bells still featuring heavily.

The Reindeer Hunters built upon and continued the story started in The Bell in the Lake really well. Arguably, many of the narrative threads from that first book have now been wrapped up, with the Weave discovered and the sunken bell recovered. But, Mytting has also managed to drop an unexpected little mystery into the mix, so it’ll be interesting to see how that gets resolved in the final book in the trilogy.

The Reindeer Hunters is an example of the best of historical fiction. It is both epic in scope, but also focused on the minutiae of the everyday. And, in spite of its mythic elements, it is very much a human story, full of rich and fully realised characters. I don’t know if I could survive in turn of the century Butangen, but Mytting has made it a pleasure to drop in every once in a while. I look forward to seeing what the rest of the 20th Century has in store for the Heknes and Butangen.

Lars Mytting’s The Reindeer Hunters, translated by Deborah Dawkin, is out now from Hachette Australia. Grab yourself a copy from Booktopia HERE.