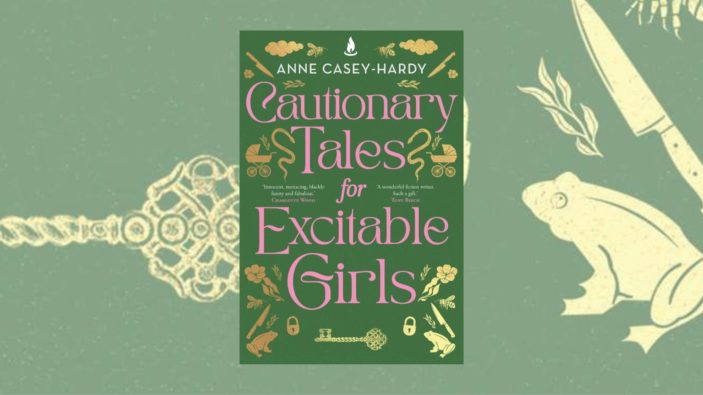 With pull quotes on its cover from the likes of Charlotte Wood, Tony Birch and Laura Elvery, Anne Casey-Hardy’s debut collection of short stories, Cautionary Tales for Excitable Girls promises to be something special – and it does not disappoint.

Often exploring themes of coming of age, motherhood, loss and friendship, these stories are about characters who ‘rush out to meet life’ and are sometimes left to deal with the consequences, whatever they may be.

Opening story “Being the Mother” sets the tone for the book as a whole, as versions of and perceptions of motherhood are explored again and again. In this piece, two fourteen year old girls take a baby from the shopping centre and then take turns pretending to be its young, single mother. They imagine what people are thinking about them, and struggle with feeding and changing the infant before returning it to where they found it.

The story is told in an almost anecdotal way, with no mention of the panic and confusion surrounding the disappearance of a child. This almost gives it the feel of a children’s book – when the girls grow tired of their game, they put the baby away and return home. But of course, the reader knows that there would be more to it than that. This sense of unreality or detachment from the truth, continues throughout the book. It makes for a delightfully unsettling way to explore darker themes.

Other standout pieces in the collection include “The Wailey Willow”, “When Bees Become Diamonds” and “Starving in the Land of Plenty”. It’s plain to see that the author has had great fun naming each piece, with the titles alone almost functioning as poetry.

Perceptive readers will discover that two of the stories, “A Red Tinged Darkness at the Gully” and “Lucy” are linked. The former follows a trio of teenage girls who decide to camp out, only to be joined by one of their younger cousins. When the cousins set off to join a party at a neighbouring camp, and the other girl (Lucy) heads off for a rendezvous with a boyfriend, our protagonist is left to imagine all sorts of horrors alone in the tent.

These horrors are realised when the characters reprise their roles in “Lucy”, as the eponymous character returns to town many years after the events of that night. The reader learns that the young cousin, Chrissie, went missing that night, and that our protagonist’s fears were not as unfounded or silly as we may have originally thought. As the girls are drawn back into friendship once again, Casey-Hardy explores the ways that tragedy can sever and reunite us.

Some readers may be frustrated by the lack of resolution offered in these short stories. If you are the kind of reader who likes everything to be neatly wrapped up, and a clear delineation between what is happening and what is metaphorical, then perhaps this will not be the collection for you. If you love magical realism, however, then this seems to be heading somewhere towards that style of writing while simultaneously doing something entirely new.

This is a beautiful collection; though each story would stand on its own, together it creates a powerful portrait of women and girls at various stages of their lives.

Read this if you liked The Natural Way of Things or Angela Carter‘s Book of Fairytales.

Anne Casey-Hardy’s Cautionary Tales for Excitable Girls is out now, published by Scribner Books. Grab yourself a copy from Booktopia HERE.