Book Review: An Echo Through The Veil is the best yet from Bonnie Wynne 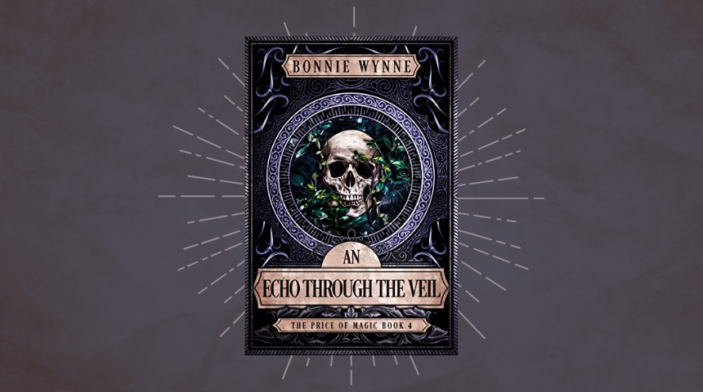 The sorceress Ailbhe Ahriddin is continuing her onslaught. As plague ravages the land, she has thrown open the gates of Death, setting her demons loose to claim the corpses left behind.

For Gwyn and her comrades, still reeling from the events of Jhabahabi, it’s yet another huge setback. But all is not lost.

Deep in the mists of the fabled kingdom of Shatse lies a weapon that could prove their salvation, with the power to close off the passageway between the living and the dead. But the Shatsese emperor is no fool. Such a weapon carries a hefty price tag – the question is if Gwyn is willing to pay it.

An Echo Through the Veil is the penultimate chapter in Bonnie Wynne‘s The Price of Magic and it might just be the best yet. Wonderfully paced and packed with plenty of plot twists to keep the tale barrelling along, it’s a fantastic set-up for the finale.

Gwyn is, as always, front and centre, growing increasingly frustrated with the roles thrust upon her. Always at odds with herself, it’s a constant battle between sorceress and ordinary girl; between red magic and the vim; between leading and being led. Tensions are simmering and Gwyn is, unsurprisingly, close to breaking point.

There’s a particularly beautiful few paragraphs where, after a major plot event, Gwyn wakes from a coma to find herself in the care of siblings Severine and Alcide. Taking over an abandoned farmstead, they are – for once – safe. After carrying so much for so long, it’s honestly rewarding as a reader to see Gwyn given an opportunity to simply be. No world-changing decisions, no bloody battles, no heavy loss. Just chickens to feed, and a friendly cow at the kitchen window. Of course, her strength returns, and the show must go on (and does it EVER!), but – speaking as a Price of Magic OG –t it was a genuine highlight.

An Echo Through the Veil marks the fourth in the series, and it goes without saying that new readers would be best heading for the first, The Ninth Sorceress. The obvious advantage of having plot and relationship context aside, Wynne is an outstanding world-builder, and it’s worth it for the opportunity to explore more of Caerwyn and the deep lore of The Price of Magic.

Bonnie Wynne’s An Echo Through the Veil is out now through Talem Press. You can read our reviews of the previous books in the series HERE, HERE, and HERE.