Theatre Review: Your favourite big green ogre takes to the stage in Shrek The Musical (Melbourne) 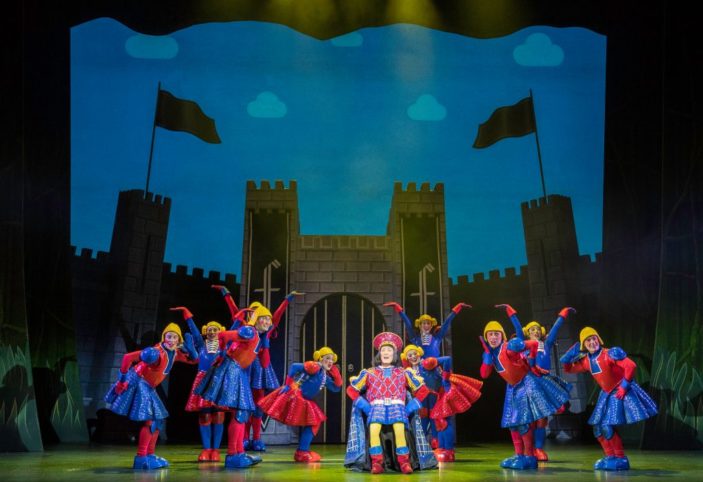 Calling all magical fairytale creatures, pack your bags, vacate the swamp, and fly on down to Her Majesty’s Theatre to see everyone’s favourite green ogre belting out a tune in Shrek The Musical!

When I first heard that they were turning Shrek, arguably one of the greatest animated cartoon’s of all time into a musical, I was shook (as the young kids would say). How could they possibly recreate the comic genius that was the original? That hilarious quick wit and adult humour intertwined into a children’s narrative, not to mention the ultimate donkey/ogre bromance. Well, donning my touch of green as requested I sashayed off to the theatre in my faux fur and settled into my seat to find out.

The curtain lifted and I was struck immediately by the intricate props and mesmerising sets. The performers wearing vivacious costumes in every colour of the rainbow spun round and round on stage in a dazzling spectacle. I was like a kid in a candy store clapping enthusiastically as I sat on the edge of my seat bopping along to the catchy tunes. When Ben Mingay who plays Shrek bellowed his first note, I was struck by the sheer force of his powerful baritone. What a sensational set of pipes. He really is the perfect performer to bring this larger than life character off the screen and onto the stage.

Lucy Durack who plays Fiona was less of a Princess and more of a queen who absolutely slayed it on stage. Charisma to boot, sensational voice, perfect comedic timing and just a genuinely jovial and loveable stage persona. The chemistry between Mingay and her was undeniable and had the crowd rooting for this seemingly mismatched romance. I still can’t quite work out how she changed so effortlessly from human into ogre and back again in so little time. Although I may be easily distracted by pretty colours and loud noises the team did a phenomenal job with timings and transformations. Kudos to the makeup and prop departments for creating literal magic on stage.

Now the absolute stand out without a doubt was the ever ebullient Todd McKenney as Lord Farquaad. There’s a reason that he’s been cast in every single Australian musical ever made through all of time, and that’s because he really is just that good. The tiny little legs that were fashioned onto a kneeling McKenney to portray Faquaad’s minute stature were comedy gold, and it was easy to forget there was a fully grown man under there. Honestly, the illusionary values of this production were absolute world-class.

I really wanted to love Nat Jobe’s performance as Donkey, but I could just not get past the accent. It was this almost lilting Southern twang of a thing with Australian notes to its edges, obviously meant to be reminiscent of Eddie Murphy. The thing with Eddie Murphy is no one can do Eddie Murphy, so don’t even try. If he had of brought his own twist to the accent I think it would of sounded a lot less contrived. Nonetheless the physical and emotive expression he did bring really tied the show together.

Last but not least I’d like to give a special shoutout to the dragon puppeteers. With gyrating hips and wildly expressive movements, I was watching them more than the dragon. I kept trying to tear my eyes away but they had this hypnotic pull that just kept drawing me back. Someone take my money already and give them their own show.

The greatest thing about Shrek The Musical is that it’s perfect for adults and children alike. I loved the fact that there was a tonne of children in the audience because it meant I had a completely unobstructed view of the stage. Humour aside, there’s enough fun, excitement, colour, singing, dancing and farting to keep any age appeased. You’ll leave the theatre with a massive smile, and if you’re single you can take heed in the knowledge that there really is someone out there for everyone, even if you’re a terrifying stinky green ogre that lives in a swamp.

Shrek The Musical is currently playing at Her Majesty’s Theatre in Melbourne. It will be playing in Melbourne until the 12th of April 2020.
It then moves to The Lyric Theatre in Brisbane. The run there is currently scheduled from 9th May 2020 to 7th June 2020.
Tickets can be bought HERE.

The reviewer attended the opening night on the 19th of February, 2020.