Theatre Review: The Jungle and the Sea at Belvoir is truly extraordinary theatre 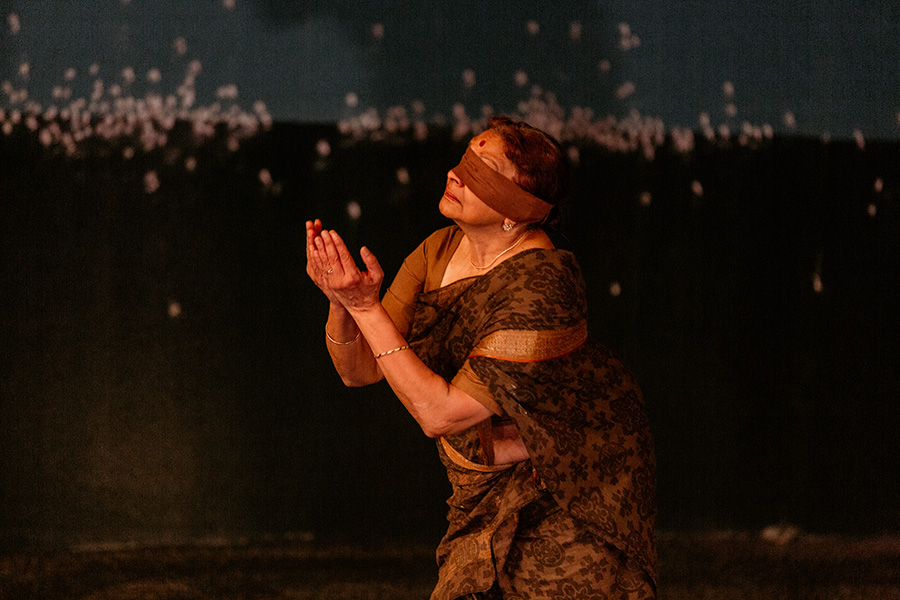 Written and directed by S. Shakthidharan and Eamon Flack, The Jungle and the Sea at Belvoir follows a family as they fight to survive during the Sri Lankan Civil War. Spanning fifteen years, we witness the family, Mother Gowrie (Anandavalli), Father Siva (Prakash Belawadi) and their four children, Lakshmi (Emma Harvie), Madhu (Nadie Kammallaweera), Abi (Kalieaswari Srinivasan) and Ahilan (Biman Wimalaratne) embark on different journeys that ultimately lead them back to each other.

After the senseless bombing of a church sheltering civilians, an enraged Ahilan is convinced by others that it is the work of the Sri Lankan government and decides to fight with the Tamil Tigers. Devastated by this news, his mother Gowrie places a blindfold over her eyes and vows she will not remove it until all her children are together in front of her again. This simple and powerful gesture acts as an incredibly clever plot device, as those around her are forced to explain to her (and consequently the audience) the atrocities happening around them.

Siva is rendered almost blind after the bombing and it is decided that he will travel to Australia with daughter Lakshmi, while Gowrie, Madhu and Abi will stay in Sri Lanka in search of Ahilan. This is where the brilliant staging and use of a revolving stage really packs a punch. As the stage moves around, Gowrie and her daughters begin to walk. Miniature vehicles are systematically picked up and moved around the circle to symbolise their travels, a technique that is also employed for air travel. It is an incredibly effective way to depict travelling a great distance on a small stage. As the women continue to walk, you get a deep sense of the journey they are embarking on and the impact it has on each of them.

The ensemble cast is incredible, particularly Anadavalli as Gowrie whose strength provides motivation for her family and Srinivasan as Abi, whose raw performance will rip at your heartstrings. While they each have a different way of demonstrating it, every single person in the performance is fighting. Fighting for peace, for family, for justice, and some will pay the ultimate price.

Another aspect of this performance that is truly inspired is the addition of live music. Indu Balachandran and Arjunan Puveendran create a beautiful and haunting soundtrack to the drama unfolding. It becomes another layer and another character within the rich tapestry that has been so skillfully created.

Inspired by real stories of real people in Sri Lanka, The Jungle and the Sea captures the pain, heartache and courage of those who experienced the Sri Lankan Civil War. It is a chance to tell their stories and honour those who fought against the war and continued to fight for justice long after it ended. Intensely moving and deeply personal, The Jungle and the Sea will open your eyes and your heart in a way that only truly great theatre can.

The Jungle and the Sea will be on at Belvoir in Sydney until 18 December 2022.

For more information and to buy tickets head to the Belvoir website.