Theatre Review: Come From Away is a heart-warming run through humanity in crisis 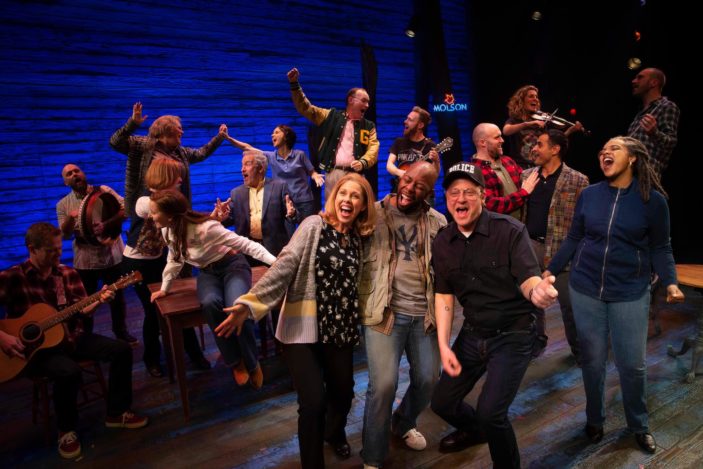 A musical about 9/11 might feel a bit risky, so it’s fortunate that Come From Away has a particularly refreshing angle on the subject. With airspaces locked immediately after the tragedy, 38 planes were forced to land on the island of Newfoundland, Canada. Over 7,000 stranded passengers were sent to nearby towns including Gander, where the Tony and Olivier award-winning show is set.

As the various passengers come to grips with their situation, and are forced to work both together and with the locals, a number of stories come to the fore. A gay couple sees their underlying tensions come to the surface after the event; unlikely romances form between people from various places and backgrounds; and the locals who all muck in to feed, house, and clothe the swarms of people suddenly dropped upon their town.

Any chance of the story falling into tackiness and ‘feel-good’ tropes are thankfully dashed by the pace of the show. With so many stories to tell, the cast of 12 are onstage together for the bulk of the show, all playing various characters. The show doesn’t take a breath during its 100 minute runtime. Come From Away is constantly moving, with a cast so in sync they’re almost mechanised, yet not losing any of the warmth and heart of the story. Songs flow into dialogue, and then back into song, and before you know it you’re locked in with them, transported to Gander and the stories of hope, loss, happiness and despair.

It’s somewhat strange watching a a show about the world’s last great airline crisis during the world’s latest airline crisis. If anything, it shows us that travel is central to human experience, and that the industry bounces back from virtually anything – just like we do.

Come From Away plays at the Capitol Theatre, Sydney until August 29th.

More info and tickets can be found HERE.