Theatre Review: A re-imagining of Jane Eyre that will leave you in the dark 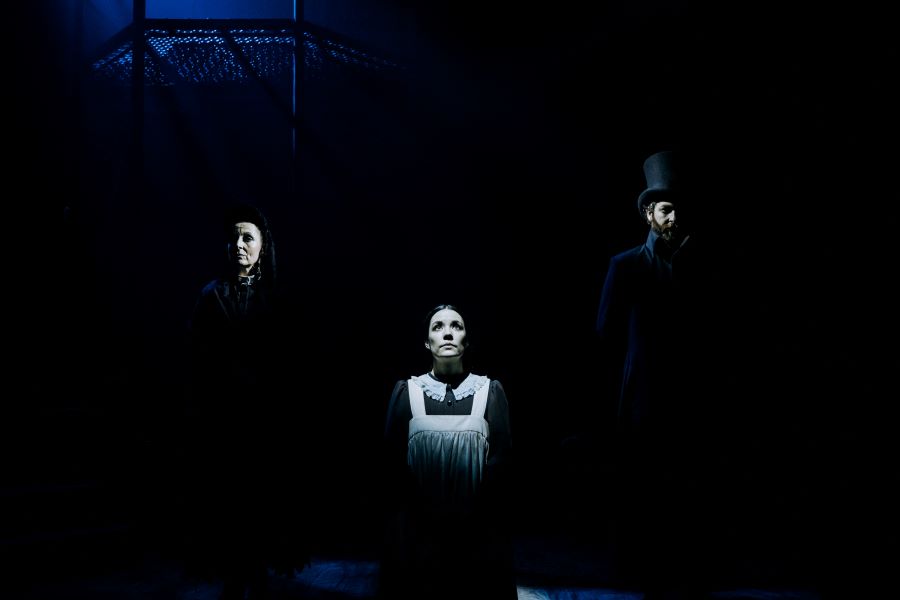 There would be few people who are not familiar with Charlotte Brontë’s classic story of Jane Eyre. Even if you have not read the original novel, there are numerous film adaptations and stage productions that have re-imagined this haunting and Gothic tale. I was interested to see what this latest offering from director Michael Futcher and the team at shake & stir would bring to the table.

For those unfamiliar, the story follows the trials and tribulations of Jane Eyre (Maddison Burridge), an orphan who is sent to live with her aunt and uncle after her parents’ death. When her uncle also dies, her Aunt Reed (Jodie Le Vesconte), who never hides her disgust for the girl, sends her off to a girl’s school when she is 10.

Jane’s time at the school is riddled with acts of unkindness and her closest friend Helen (Hilary Harrison) dies of consumption in her arms. After 8 years she leaves and takes up employment as a governess in Thornfield Hall to a young French girl Adèle (Hilary Harrison), and it is here she encounters the master of Thornfield, Mr Rochester (Julian Garner). They fall in love but everything is not as it seems and there are strange cries which break the stillness of the night and eventually wreak havoc for all involved.

This adaptation at Riverside Parramatta adheres strongly to the source material. It contains all the Gothic elements the original novel is known and loved for, and it portrays them with skill and depth. The set design is inventive and to be commended for its complex simplicity. A highlight was undoubtedly the creative use of pyrotechnics which went a long way to creating authenticity and atmosphere.

Maddison Burridge is fantastic as Jane, managing to capture the characters strength and tenacity while displaying a vulnerability which made her relatable. This was perfectly paired with Julian Garner’s portrayal of Rochester, one of the most confounding romantic leads in literature. He imbued wit and passion into the role, managing to maintain the mystery that is so essential to his character. Together, these two actors were the standouts of the performance.

As this was a smaller cast of four, one person would play numerous roles. Often this can work and does not impact the overarching story, but in this instance, it was confounding. The difference between the housekeeper Mrs Fairfax and a rich suitor Miss Ingram (both played by Jodie Le Vesconte) appeared to be the addition of a fan and a posher accent. I feel like more could have been done here to really differentiate between the two vastly different characters. Having said that, Jodie Le Vesconte did an incredible job with what she had.

The same could be said for Hilary Harrison who plays the young French girl Adèle (among others). This character was portrayed as some sort of ventriloquist dummy, a big pink bow in her hair and vacant expression on her face. While I appreciate Adèle is not a pivotal character in the story, this portrayal of her was questionable. Perhaps a physical representation of how Rochester always refers to her as his little doll, I’m not sure what value this interpretation provided other than a few laughs.

There were many moments throughout the production where it felt more like a comedy than a Gothic drama. The depiction of Aunt Reed’s death being one such moment where I wasn’t sure if I was supposed to find it amusing. While there is humour to be found in the witty banter between Jane and Rochester, and often with Mrs Fairfax, I was surprised at the parts of the narrative that were funny – whether intentional or not.

There are some truly brilliant aspects to this adaptation of Charlotte Brontë’s pivotal novel, and some that just miss the mark. It is no small feat to adapt such a well-known classic into a two hour play and this is a valuable interpretation.

Reviewer attended the performance on 31 August 2022 with swing Maddison Burridge in for Nelle Lee.