Review: Tutankhamun gets his own projection-based immersive exhibition with Nat Geo’s Beyond King Tut 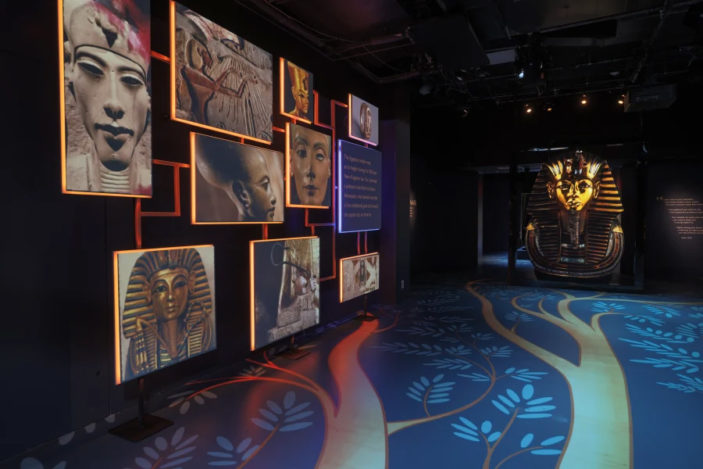 By now, I’m sure you have had the chance to hear about, or see for yourself, the “immersive” art exhibitions that have seemingly popped up in every corner of the globe. Popularised, in part, by their ability to be adjusted for social distancing guidelines in recent years – even becoming a drive through experience – these are exhibitions that rely on projection technology to immerse the viewer in the art they’re celebrating, rather than actually getting to see physical pieces of the original art itself.

In Vancouver, I wrote about Imagine Picasso, which saw the rotating works of the legendary artist projected onto the walls of a convention centre, accompanied by a score, and preceded by a bit of a Picasso history lesson. It was impressive, and indeed immersive, but I couldn’t help but wonder, “was that it?”, when I left the exhibit. There was only one room with projections, and in Canada at the time, there were multiple, actual, physical Picasso exhibitions in the country, that were notably more affordable. Beyond the immediate spectacle, and the obvious advantages in a pandemic, I struggled to see the long term benefits of such a production.

But outside of traditional art exhibitions, could there be another way to use this technology to easily tour an experience that would otherwise only be available in one place in the world, at one time?

While touring Picasso and Van Gogh exhibitions have certainly always been popular in my lifetime, few travelling exhibitions have gained the furor and media attention that the “Treasures of Tutankhamum” exhibit did when it opened at London’s British Museum in 1972, before moving onto the USSR, the USA and Canada in the 70s – bringing the gold death mask of King Tutankhamun, amongst 50 other artefacts, to millions upon millions of visitors. It remains one of the most successful touring exhibitions of all time.

From November 1976 to April 1979, “Treasures of Tutankhamun” traveled to six American cities with the help of NEH grants. As millions of people lined up for hours to see the show, museums became the hottest tickets in town, helping usher in the era of the blockbuster museum exhibition. – NEH

So, now with the items under lock and key at the soon to be opened Grand Egyptian Museum (literally right next door to the Pyramids of Giza), and the prospect of future tours of its kind unlikely (due to the pandemic, the last touring Tutankhamun exhibit to be planned for the Australian Museum in Sydney was cancelled in 2021), it comes to make sense that this would be an attractive subject matter to apply the digital, immersive experience. 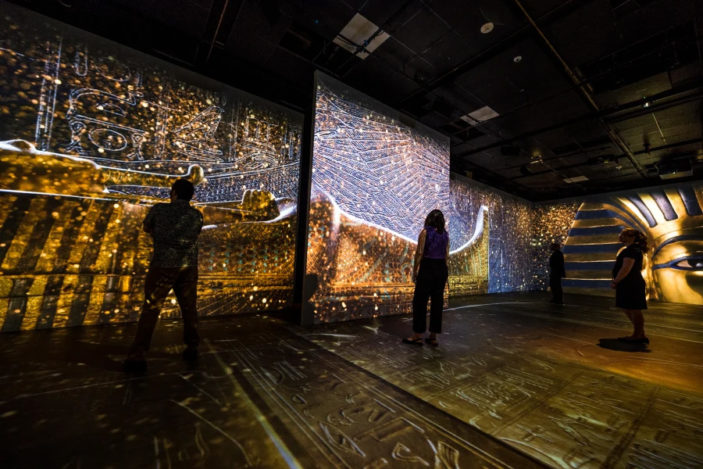 So leave it to National Geographic, who has regularly featured Tut on its cover and in its pages, to engineer the new immersive experience Beyond King Tut, which is currently in Boston and Washington D.C., and coincides with the 100 year anniversary of the discovery of his tomb.

The Washington D.C. location is the permanent National Geographic Museum (fun fact: you’ll currently find the Australian Embassy in the same building), where it will be housed until February next year.

It’s an expansive exhibition, with a number of rooms designed to tell the story of Tut, his tomb, and its discovery, in the most immersive way possible. While there are no relics from the tomb in attendance, there are a number of recreations throughout, including the carved tomb itself (pictured below), and a giant version of the iconic mask. They also attempt to give you the experience of what it looked and felt like walking into the rooms where Tutankhamun was housed. 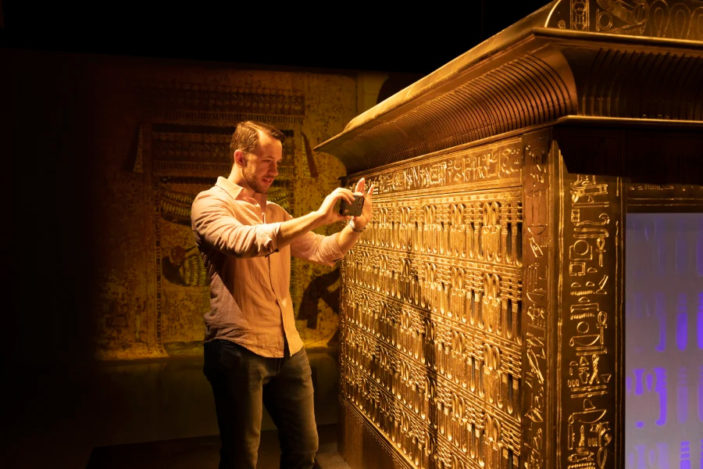 Cleverly designed audio visual experiences are the heart of the exhibition, detailing the mythology behind this particular King, and what the carvings on the tomb – and other items found inside – revealed about the boy King himself, and of the time in which he lived. There is more general education of Egyptian beliefs of the era, and of how they discovered the tomb, and what they did with the items once they were discovered.

Beyond King Tut shows what’s possible with the immersive projection based exhibition, in an engaging way that is worth the price of admission. The ways they tell the story both of the tomb itself, and of how they found it, and the exhibitions that toured the globe as a result, are as informative as they are beautifully delivered.

The animations are outstanding, and the soundscapes well considered. While nothing will ever beat seeing the real thing, as both an educational exercise, and an immersive, entertainment experience, this is certainly the next best thing.

Extra marks to the production for including Steve Martin‘s King Tut in the story – no look at the impact of King Tut on popular culture would be complete without including him in the picture. And I don’t say that jokingly – this was a popular sketch at the time because it was a response to the genuine furor that was taking place in the US at the time. And remains one of Martin’s most iconic sketches. At the time, it helped him pack out stadiums (the first comedy act to do so) and get a Billboard charting single out of it, too; it hit #17 on the Hot 100 charts and sold over a million copies.

The exhibit will soon open in Los Angeles, New York, Vancouver, Atlanta and San Francisco, where – fun fact – the original 1970s US exhibition ended, and resulted in a lawsuit from a police lieutenant who claimed he had a minor stroke due to the curse of the pharaohs. So, without any actual relics on display, it’s fair to say you should be safer this time around…

You can get all the dates and details HERE.

Beyond King Tut is now taking place in Boston and D.C., with more cities to follow. For more details head to their official website. For the Washington D.C. exhibit specifically, which runs until 6th February 2023, head HERE.

While in D.C. the author stayed at The Ven Embassy Row as a guest of Destination D.C.  Images provided by Nat Geo.