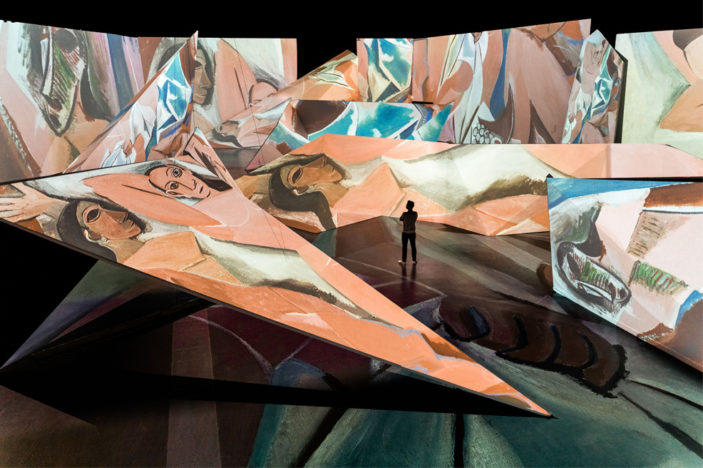 Millions around the world have already experienced Imagine Van Gogh – a reimagining of the way we immerse ourselves in the pieces of an adored artist, usually limited by the finite nature of their work.

3.5 million tickets have been sold in North America alone, and the concept is currently in Brisbane as it tours Australia under the name Van Gogh Alive. And if you haven’t been already yourself, maybe you saw it in Emily in Paris.

Using the latest in projection technology, the concept has allowed Gogh’s collection to be simultaneously presented in spaces all over the world across the last decade – from Sydney to London, Vancouver to Dubai, Paris to Singapore – with the makeup of the experience to vary based on space and location. In theory, no two “Imagine” exhibitions are the same.

And it just so happened to be an experience easily adopted into a safe spaces for Covid times – in Toronto, Canada it  even became a drive through when restrictions were at their peak. But the success of this experiment – which asks the question: will people still pay to experience art, even if it’s not the original? – has ensured that the concept will live on beyond Van Gogh and the pandemic.

And now, presented by the same people behind the Van Gogh experience, the latest artist to get the large scale, interactive projection treatment, is Picasso – with Imagine Picasso debuting in Vancouver, Canada at the end of last month, following a stint in Quebec. And so far it’s been a runaway success, even as multiple physical Picasso exhibitions have been presented in the country. Toronto’s AGO currently has Picasso’s blue period on show, while in Quebec City, a life retrospective “Picasso. Figures” just wrapped up at MNBAQ.

So what is it about this concept that has crowds so enraptured? 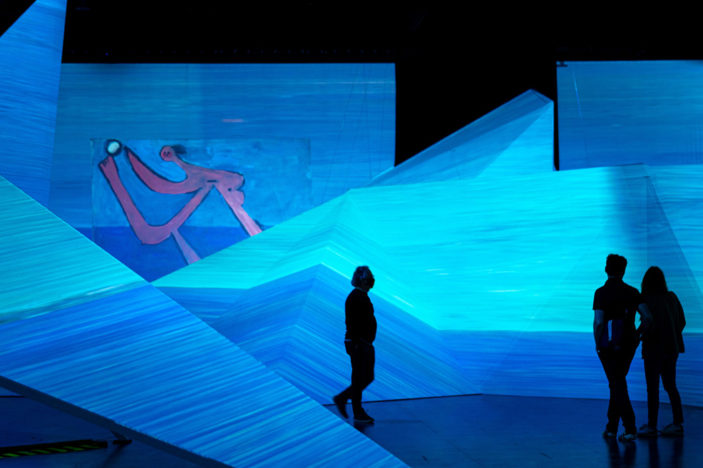 Well, as the pictures suggest, it’s the immersive experience that the exhibition promises – using the Image Totale process of multi-projection, in spaces “without centre or periphery”, where every viewer can have their own unique experience and view point (literally and figuratively).

Imagine Picasso conceptually chronicles the innovative relationship between Pablo Picasso and the winner of the French Grand Prix national d’architecture, Rudy Ricciotti. This particular installation was developed by Annabelle Mauger and Julien Baron, using the diagonal structures of Riccotti to explore unusual projections in a fractured space.

One may posit that Picasso would have never wanted to see his work portrayed like this – and without him present how would we know – yet in 1971 Picasso authorised a audiovisual projection of this paintings at the Les Halles Baltard. In many ways, this is the next evolution of that, and described as “the process of cubism in motion”. 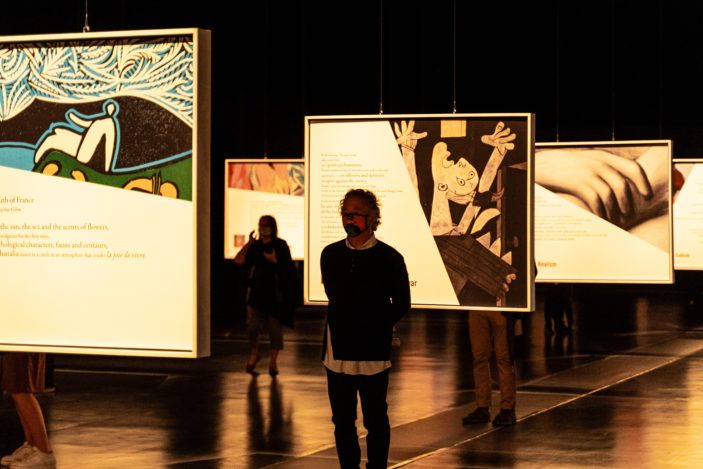 As you walk through the exhibition now on display at the Vancouver Convention Centre, you start in a room that provides an introduction to Picasso and the experience itself. The room is centred by a large photo of Picasso in his studio in 1946, as classical and jazz music plays in the distance.

A second room names the 216 pieces which you’ll be seeing throughout Imagine Picasso, from his most iconic cubist pieces to the more traditional portraits that represent the earlier parts of his career. Large hanging signs (as seen above) explain more about the artist, his “periods” (e.g. blue, surrealism, and cubism) and the philosophies behind it.

You then enter the main attraction: a large room with projections on its walls, the sculptures in the middle of the room and even on the floor (which is something of a technical marvel in itself). Some works are projected to its original dimensions, others are broken into pieces that rework and reimagine the piece in the unique space.

Sometimes, the pieces are zoomed in with such great detail that allow you to see the individual brush strokes. They seem to go chronologically through his career, and are displayed with the accompanying soundtrack you had heard echoes of earlier. 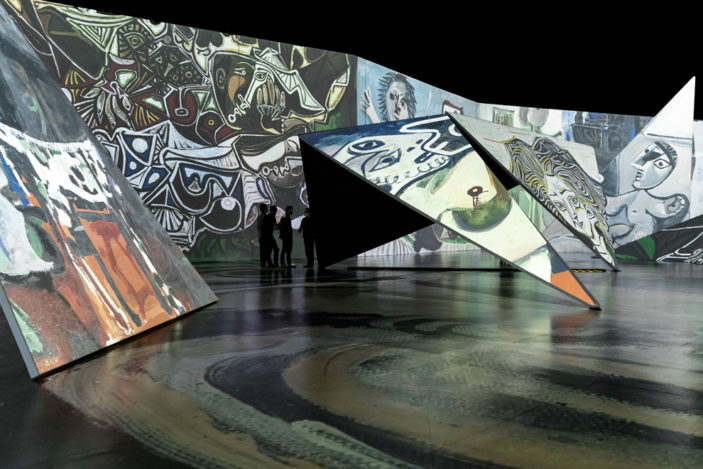 The soundtrack was synched to the graphics, and included some recognisable works – including what I’m positive was a piece from Hans Zimmer’s soundtrack of Interstellar.

While the singular space of the projections may not be what you are used to from an art exhibition, the grandeur and diversity of the space ensures that every corner you stand in will elicit a unique experience – so spending a great deal of time in that room is greatly encouraged.

In fact, it only gets better by how much time you spend in the space, allowing you to enjoy the unique angles to view the works, and the once in a lifetime experience it offers (and hopefully sticking around long enough to get to see some of the works twice).

Given how far and wide the Van Gogh experiences have gone, chances are that once in a lifetime experience will make its way to you, wherever you are in the world, if it hasn’t already.

But for now, for those in Vancouver, Imagine Picasso runs at the Vancouver Convention Centre until 8th January 2022. For tickets and more details head HERE.

All photos by Jean Sebastien Baciu.

The writer attended as a guest of the exhibition.