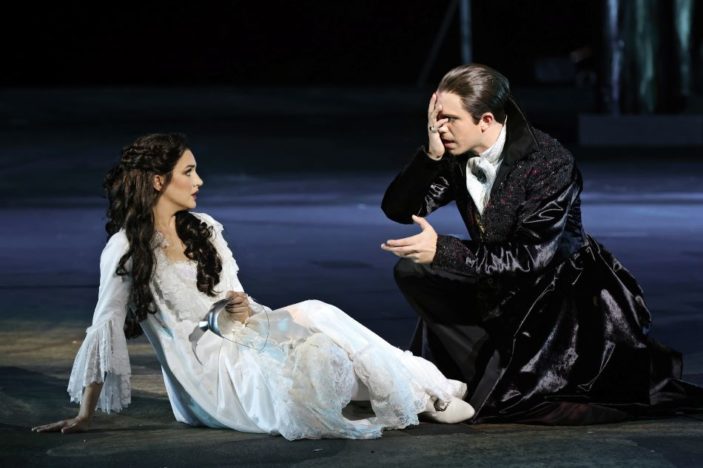 The Phantom of the Opera is the longest-running show in musical history. It tells the story of a mysterious and terrifying masked man who lives beneath the Paris Opera House and of a young, talented singer who becomes his obsession. This Opera Australia interpretation, directed by Simon Phillips, is presented on a floating stage on Sydney Harbour, with the stunning views of the city adding to the magic of the production.

What can be said about The Phantom of the Opera that hasn’t already been said before. Premiering in London in 1986, it has captivated audiences for 35 years. Andrew Lloyd Webber’s score contains some of the most recognised and iconic songs of all time. What makes this performance by Opera Australia so remarkable is its execution.

Gabriela Tylesova has created another world through the set and costume design. A sweeping staircase and elaborate chandelier form the heart of the Paris Opera House, with rich colours and fabrics bringing the characters to life. Creating this floating world is no small feat and when combined with exceptional lighting design by Nick Schlieper, the audience is transported. It’s the escapism we all need right now.

With the orchestra, conducted by Guy Simpson, situated beneath the stage, the surround sound is consuming. As the first chords of the title song pulse across the harbour, you could feel it reverberate through your body. It became clear very quickly that this was more than simply a stunning performance, it was a full sensory experience.

Even if you are familiar with the story, there will be moments throughout the performance that surprise you. The inclusion of pyrotechnics and cranes to enhance the theatrical elements is inspired and add a sense of wonder.

Georgina Hopson is sensational as Christine Daaé, encapsulating her passion, her strength and her internal struggle. Her talent is perfectly paired with Joshua Robson as The Phantom who brilliantly executes the man’s torment. Other standout performances included Callum Francis as Raoul, Vicomte de Chagny, Christine’s childhood sweetheart, and Naomi Johns as the hilarious Carlotta Guidicelli.

As the performance came to its conclusion, and the cast came out to take their bows, some of the loudest applause was for the stage crew – and with good reason. This performance of The Phantom of the Opera contained a lot of moving parts – literally. From cranes swinging chandeliers – and performers – across the stage, to boats moving past flames, and video projections appearing on mirrors. It is these men and women who are the puppet masters, the string-pullers and the glue that holds the entire performance together – and they do it remarkably well.

Opera Australia has taken one of the most well-known operas of all time – and made it better. There aren’t enough adjectives available to adequately describe how incredible The Phantom of the Opera is. It will overwhelm your senses to the point where you feel the music is moving through you and take you on a journey of beauty, fantasy and terror.

As I walked away, leaving the lights of the harbour behind me, I was reminded of a quote from Pretty Woman, when Richard Gere describes Opera to Julia Roberts. He believes people either love it or hate it. “If they love it, they will always love it. If they don’t, they may learn to appreciate it, but it will never become a part of their soul.” I used to think that was such a cliché remark, but I finally get it. The Phantom of the Opera will capture your soul and stay with you long after the final chords of “The Music of the Night” have faded out across the harbour.

The Phantom of the Opera on Sydney Harbour runs until 24th April 2022.

For more information and to book head to the Sydney Opera House website.