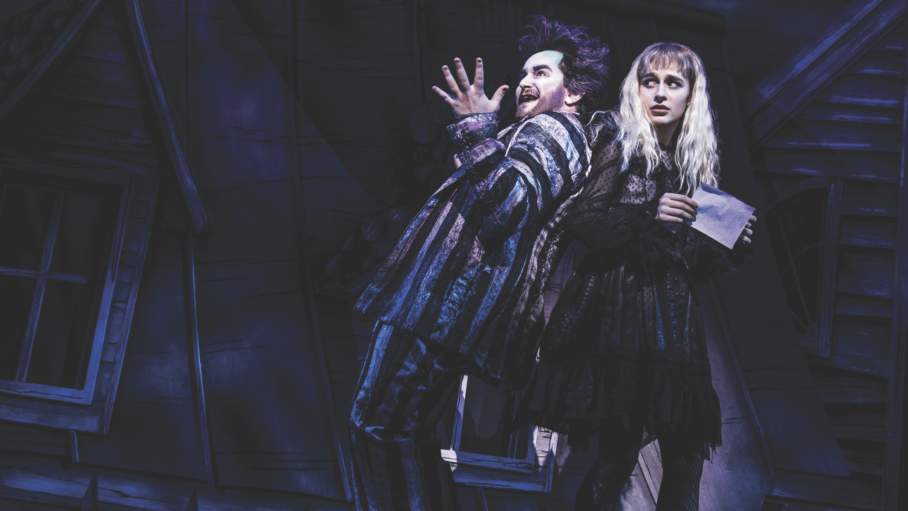 While the fanfare over Tim Minchin’s work on Matilda felt deafening, it may surprise some to learn that he’s not the only Aussie who’s setting Broadway alight with his lyrics and music. Enter another composer-actor-comedian, Melbourne born Eddie Perfect – who you’ll remember from performance in Offspring or from penning and starting in the hilarious Shane Warne: The Musical.

Perfect is following in Minchin’s footsteps, being the latest hitmaker on the New York Stage. His production is an adaptation of the classic Tim Burton film Beetlejuice, which debuted in Washington D.C. a year ago, before making its mark on New York City as a Tony nominated Broadway Musical earlier this year. One of the reasons you may have heard less about this show is because its critical reception hasn’t been quite as overwhelmingly positive compared to Minchin’s Matilda; but with 8 Tony Award nominations, a so-far-successful 7 month run and Worldwide touring in the pipeline, this is nothing short of any Broadway producer or composer’s dream. And the show is winning over new fans night after night.

Now take all that and let us blow your mind: It’s not even Perfect’s only show on Broadway to premiere this year. Following its 2013, 9 month run in Melbourne, Eddie Perfect was brought in to rework the music for the spectacular stage production King Kong, which debuted last October and ran for over 350 performances. It heads to Japan next. All this in mind, it may not surprise you that Perfect and Minchin share the same agent.

Beetlejuice follows the basics of the source material. It tells the story of two homebody ghosts – who are even more homebodies in the stage version – who are trying to kick out a family from their home, a family even more pretentious than the original. Their story has been changed quite a bit, with the daughter struggling with the death of her mother, something only alluded to in the original film. The daughter Lydia, played by Winona Ryder in the original film and here given new life by Sophia Anna Caruso, is perhaps the most true to character, right down to the camera she uses. Though there were no moments like her song “Dead Mom“ in the original film – they definitely take the time to flesh out her character.

In the original film, Beetlejuice doesn’t come in until halfway through, and ironic to its name is actually in a very small portion of the film – but here he’s berating us from beginning to end. So fans of the character definitely have that to look forward to.

I had the chance to see the show this week in New York and was struck by the grandeur of the production, the marvelous stage design, as well as its humour. Juvenile humour at times, sure – and definitely more risqué than the film (children be warned – there is a lot of swearing) – but hilarious all the same. You really don’t stop laughing from start to finish.

And how was the score? Fans of Perfect will not be surprised to hear that the songs were hilarious. Original songs like “Creepy Old Guy” and “That Beautiful Sound” are memorable, though most tracks only work within the context of the show, and with the bombastic, fantastic performances on stage. Of course there’s a couple of Harry Belafonte’s songs from the film in the show too – “Day-O” proving to deliver a scene just as memorable here as it did in the original film.

Sophia Anne Caruso is delightful as Lydia, Alex Brightman as Beetlejuice really makes his mark on the role, taking Keaton’s original and making it his own. His delivery, timing and dedication to spitting so much he’s almost drooling, is what makes the music work so well. Any other take on the role will be following in his footsteps, something the Californian born actor has done before – having also originated the lead role in School of Rock, which is currently enjoying performances in Sydney.

I mentioned the stage design, and really this is amongst the best I’ve seen on Broadway – with the sort of magic you experienced in Mary Poppins, taken to another level. There’s lots of trickery with lights and projections, trap doors, sandworms, and light pyrotechnics. It’s truly a technological marvel; a modern show made with the latest stage technologies in mind.

The show is expected to eventually make its way to Australia, but until then it’s definitely worth seeing on your next trip to NYC. There’s nothing better than seeing the original Broadway cast do their thing with the roles they helped develop. It really is part of the magic of Broadway, and there’s never a guarantee the spectacle of the production will be replicated quite the same – or as well – once it starts touring.

And with both this show and King Kong set to tour the world, it’s anyone’s guess what Eddie Perfect will do next. But chances are, his star is only set to rise after the success of the latest Broadway adaptation to set New York alight.

Beetlejuice is currently enjoying performances in New York at the Winter Garden Theater. For more information on performances visit broadwaycollection.com or to secure the best seats to preferred shows at a great price, book in advance through a preferred travel provider.

While in New York, the author stayed at the comfortable and trendy MOXY Times Square, just a 15 minute walk from the Winter Garden Theater.

The author attended the performance on 12th November 2019 at the Winter Garden Theater as a guest of Broadway Inbound.