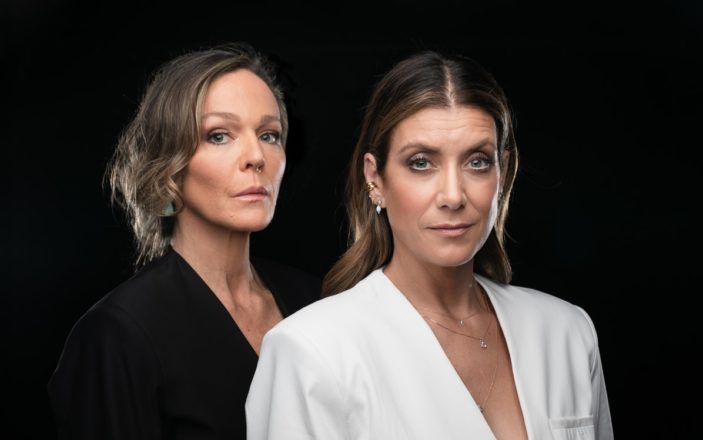 WA playwright Kate Mulvany’s adaptation of the classic Friedrich Schiller play Mary Stuart has come to Perth Festival and it’s ready to live up to the reputation of its predecessor. The two hour production focuses on the last days of Mary, Queen of Scots and explores her complex relationship with cousin Queen Elizabeth I of England. Mulvany’s alterations to the original 1800 play add well-timed humour, contemporary language, and a new perspective which gives a voice to these two powerful historical women.

This iteration of Mulvany’s Mary Stuart sees the return of Caroline Brazier as Mary (after she starred in the 2019 Sydney production) and Kate Walsh takes on the role of Elizabeth. Brazier gave a layered performance, committing to the public view of Mary as a pious victim to begin with and then allowing cracks to form so that her deeper, stronger feelings were slowly revealed. Walsh was also truly captivating as a short-tempered, pouty, and often hilarious version of Elizabeth, taking what could have become a caricature and making her relatable and moving.

Mary Stuart is directed by Mel Cantwell, with the sets and costumes changing subtly from the 2019 version. The dimly lit, minimalist design had an almost dystopian feeling and the costumes highlighted the importance of the women’s stories, with the men dressed in black suits and white collar ruffs while the queens (especially Elizabeth) wore extravagant gowns.

The play began with Mary trapped in her room in Fotheringhay Castle, where she had been imprisoned for 19 years by Elizabeth. She talked to her sympathetic and amusing jailer, Paulet (Peter Holland), and was suitably confronted when his nephew Mortimer (an engaging Kyle Morrison) revealed himself as an extremist Catholic – the tattoo of Mary’s face on his chest was a nice Mulvany comedic touch. There was a lot of humour like this scattered throughout the play and while some of the jokes were a little predictable, they provided some much-needed tension relief and a modern influence that made the story more accessible.

As the story progressed and turned to Elizabeth, the scenes became more campy and surreal, including an imagined conversation between the two queens (which historically never happened). The two sat alone together during one of Elizabeth’s parties, drinking wine, making crude jokes, and discussing what it means to be a woman – it was incredibly impactful. When Mulvany adapted the play, she researched the queens and actually included their own words – as taken from letters to each other – in this conversation.

Mary Stuart was often gut-wrenching, especially in scenes like the queens’ passionate monologues, where it became impossible to look away. After spending most of the play acting cheeky and vain, Elizabeth had a poignant moment alone on stage, when she was deciding whether to sign Mary’s death warrant. She was vulnerable and tired, removing her wig and makeup while she spoke about her inner conflict. Mary’s final confession was another riveting speech, where Brazier stood centre stage, her tear-streaked face upturned, and gave an unfaltering expression of Mary’s deepest secrets.

‘Perhaps if you men made some room in this world there would be space for the both of us’ Mary says to Paulet right before her death – a deeply affecting line that sums up most of the play’s themes. With committed performances and flawless execution, Mary Stuart explores the bitter realities of life as a woman fighting for power.

Mary Stuart is playing at the Heath Ledger Theatre in the State Theatre Centre until 26 February. For tickets and more details head HERE.