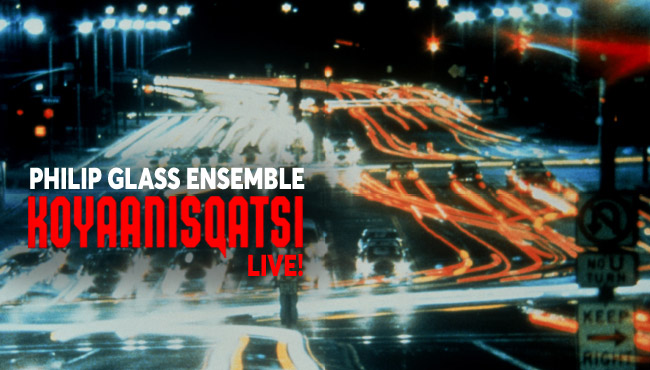 Performed by the Phillip Glass Ensemble, the score from 1983 cult masterpiece KOYAANISQATSI will accompany a screening of the film at a special event at Arts Centre Melbourne’s Hamer Hall next March.

KOYAANISQATSI took five years to film. Free of narrative, the title comes from the Hopi language word for ‘life out of balance’. Using footage of nature, cities and people, combined with time-lapse and slowed-down shots, Godfrey Reggio‘s film is a powerful statement about our changing relationship to the environment. The first in a trilogy of works, in 2000 KOYAANISQATSI was selected for preservation in the United States National Film Registry by the Library of Congress.

American composer Phillip Glass, who turns 80 next year, has composed more than twenty operas, and ten symphonies, as well as concertos for violin, piano, timpani and saxophone quartet, and has been nominated for three Academy Awards for his film soundtracks. He has collaborated with an extraordinary range of artists including experimental theatre director Robert Wilson, Paul Simon, Linda Ronstadt, Yo-Yo Ma, and Doris Lessing.

The Phillip Glass Ensemble, founded by Glass in 1967, consists of seven musicians playing keyboards and a variety of woodwind instruments. Amplified and fed through a mixer, the group has wowed audiences across the world.

At the one off event on March 10th 2017, the Ensemble will perform the score of KOYAANISQATSI live, during a screening of the film.

Tickets are available through the Arts Centre Melbourne website.