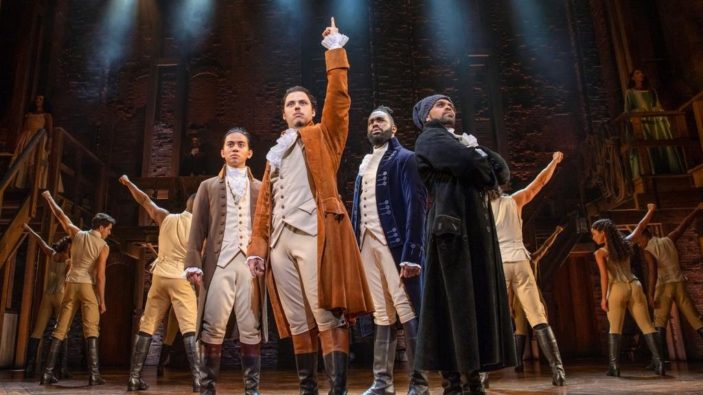 Hamilton has a new home in Australia – officially opening in Melbourne’s theatre district after spending much of 2021 and the early months of 2022 based in Sydney.

The Tony Award-winning blockbuster, at the centre of a premiere bragging rights battle between the two capital cities, was eventually won by the New South Wales Government. But with the onset of the COVID-19 pandemic truly tearing through the Australian arts industry in 2020 and 2021, Sydney’s extended period of lockdown meant that the Australian production of Hamilton took a serious hit.

Losing over 100 performances of their Sydney run, the Australian company eventually were able to complete their season at the Lyric Theatre before kicking on over to Victoria, where the iconic Her Majesty’s Theatre awaited.

And the energy in the theatre on premiere night matched the hype.

Hamilton – as a production – has become bigger than even Lin-Manuel Miranda possibly imagined. A story about the American Founding Father whose untold story is depicted here as one driven by unnerving ambition, a clear ambition and the dream to become more than your circumstances dictates, Hamilton has represented an American Dream for many, and a thrilling piece of theatre for more audiences around the world.

The way the characters have been written make the audience barrack for many of them at different points of the production, regardless of their written intent or narrative arc.

Alexander Hamilton, ‘bastard, son of a whore’, yet with an inexplicable talent for oration, leadership and politicking? Of course you want him to win.

Aaron Burr, the revolutionary whose natural talents begin to play second fiddle to Hamilton as the latter’s profile and career advances? Despite the breakdown of the duo’s (cordial, let’s be honest) relationship, you want him to rise up.

Eliza Schuyler – the young, kind-hearted girl who becomes Hamilton’s wife and as such, one of the play’s most interesting side characters? You just want her to overcome and emerge happy.

Each emotional beat within the dialogue of the play – which is no mean feat to achieve when dealing with material as dense as Hamilton’s – is played to amazing effect by this Australian company. It can be daunting to step into the period-correct boots and corsets of characters made famous by such a strong Broadway cast, but the Australian company of Hamilton steps up to the plate and then some.

Jason Arrow, as the titular Hamilton, is effortlessly magnetic each moment he is on stage. Striking a balance between confident idealism and charisma that would ultimately add to his fall from grace, Arrow’s turn as the penniless immigrant who became instrumental in the founding of the United States is incredible.

And then we have Lyndon Watts, whose Aaron Burr should be remembered as being as strong and impactful as Leslie Odom Jr.’s take on the antagonist in the original Broadway production. A phenomenal vocalist whose range is exemplified through dynamic performances – whether it’s the hopeful ‘Dear Theodosia’, or the bombastic show-number ‘Room Where It Happens’ – Watts is a firebrand to watch perform.

As Burr, Watts moves between competitiveness to resentment; resentment to regret with ease. It’s impossible not to empathise with his character: overlooked and denied the career pathway he had envisioned for himself, in favour of the dogged determination of Hamilton. Both Watts and Arrow are electrifying to watch as scene partners and as part of the wider ensemble, they lead brilliantly.

As the play continues, buoyed by its hip hop-heavy soundtrack and now classic Lin-Manuel sound (melodically, keen ears will pick up similarities to later Miranda compositions: Moana, Encanto), the audience’s enthrallment is kept by a story that blends fact and fiction easily.

From Hamilton’s rise to political importance under the wing of George Washington (portrayed by a captivating Matu Ngaropu); to the love triangle between himself and two Schuyler sisters Eliza and Angelica (this night portrayed by Tigist Strode and Akina Edmonds, respectively) and then the country’s first sex scandal that sees Hamilton tied up with the married Mariah Reynolds (Elandrah Eramiha), Hamilton provides all the juice of a modern day political melodrama.

Strode, who stepped into Eliza Schuyler’s shoes in place of Chloe Zuel for the opening night, is a revelation – her voice has a Disney princess quality that was immediately entrancing. Smooth R&B runs and soaring projection, both solo and as part of the trio of sisters (Peggy Schuyler, also played by Eramiha), stunned within the acoustics of Her Majesty’s Theatre. Strode’s performance as Hamilton’s leading lady is a testament to the fact that in a large company like Hamilton’s, every performer comes to the stage with nothing less than their A-game. An incredible watch.

This extends to the cast of swing performers, the dance captains and other members of the main cast who may command smaller stage time (looking at you, Brent Hill/King George III). The chemistry within this cast is enough to allay any doubts that Hamilton would be in less than capable hands Down Under. No, it’s an assurance that the legacy is being upheld.

The representation of such a diverse range of backgrounds and acting experiences on stage is one of Hamilton’s major drawcards: certainly in Australia, we haven’t seen a cast quite like this command such a lion’s share of the landscape. The addition of original American cast members such as Jimmie ‘JJ’ Jeter and Justin Bryant, bolster the core of the Hamilton identity out this way, but the electrifying nature of this cast of actors from the Pasifika, African and Asian diasporas makes this production of Hamilton effortlessly memorable and unique. Moreover, it reinforces the plain truth that these sorts of shows and companies can exist and thrive in otherwise traditionally white, upper class spaces.

Hamilton is easily the biggest ticket in town, and rightfully so. A historical story told through a modern perspective it may be, Hamilton has proven its place within the pantheon of iconic productions and for the Australian theatre industry, it’s solidified its role as a game-changer.

Hamilton is currently running at Melbourne’s Her Majesty’s Theatre through into August 2022.