Sydney based Wiradjuri/Kamilaroi artist Jonathan Jones‘ piece barrangal dyara (skin and bones) is the most ambitious Kaldor Public Art Project to date, with 15,000 white shields and eight soundscapes taking over the original footprint of the Garden Palace building, which burnt down in 1882.

Jones is the first Indigenous artist to head a Kaldor Public Art Project. Of his piece, he said: “barrangal dyara is a response to the immense loss felt throughout Australia due to the destruction of countless culturally significant Aboriginal objects when the Palace was razed by fire on 22 September 1882. It represents an effort to commence a healing process and a celebration of the survival of the world’s oldest living culture despite this traumatic event.”

The work takes its name, barrangal meaning ‘skin’ and dyara meaning ‘bones’, from the local Sydney Gadigal language, with approval from the community on whose country it takes place. The shields, drawn from four traditional shield shapes found across south-east Australia, trace the exact footprint of the Garden Palace building, which stood on the site from 1879 until 1882. They represent the objects lost in the fire, many of which had important cultural significance to generations of Indigenous Australians. The soundscapes were developed with the help of several Aboriginal communities from across the south-east, incorporating an array of languages, while a meadow of kangaroo grass in the middle of these formal European gardens references traditional agricultural practices. The piece is designed both as a memorial to a great loss and a celebration of resilience.

The scale of the piece is so huge that drone footage has been used to capture the site. 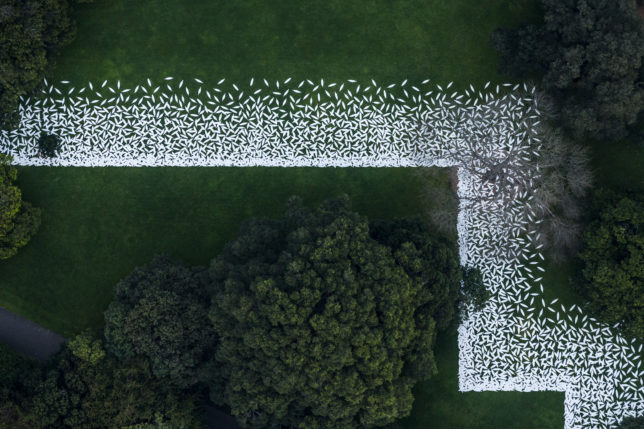 John Kaldor, Founder of Kaldor Public Art Projects, said: “Our 32nd project created by Jonathan Jones is one of our most significant and ambitious to date. My admiration for Jonathan has grown as the project has progressed, and his great knowledge and compassion has given me an insight into a different Australia. Working with Jonathan has been a privilege, wonderful personal experience for me. It re-tells imperative local history from an Aboriginal perspective, giving new light to the Garden Palace’s history, whilst also speaking to cultural tensions still present in contemporary Australia.”

An extensive public program, including presentations of Aboriginal language, performances, talks and workshops for people of all ages, will complement barrangal dyara (skin and bones), while some of Sydney’s leading cultural institutions have created their own programs to support the piece. Program partners include Bangarra Dance Theatre; the State Library of New South Wales; Sydney Conservatorium of Music; the Museum of Arts and Applied Sciences; Art Gallery of New South Wales; Sydney Living Museums and the Australian Museum.

In addition, visitors will be able to download the free Project 32 app, created in partnership with Optus. The app activates as guests walk through the site, featuring insights from cultural leaders, historians, artists, writers, theorists and cultural practioners, discussing the ideas that surround the piece. It is available for both Apple and Android powered phones.

barrangal dyara (skin and bones) by Jonathan Jones will be on display at the Royal Botanic Garden, Sydney until October 3rd. Admission to the project is free.
For more information, please see the Kaldor Public Art Project website.

Members of Aboriginal communities are respectfully advised that this exhibition recalls the loss of cultural objects from across the south-east of Australia.