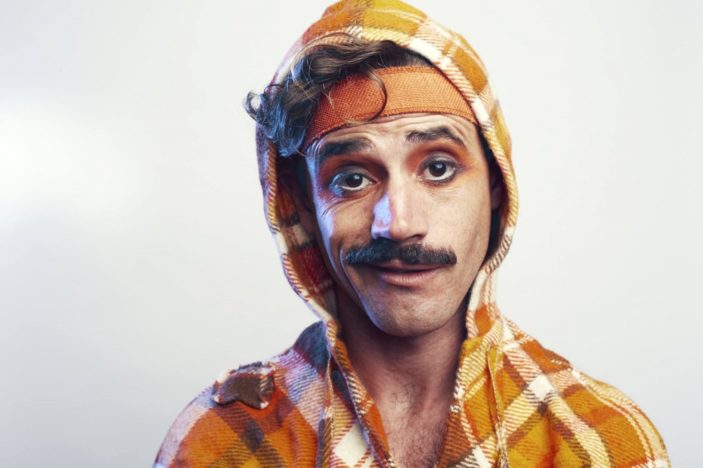 Whilst it’s perfectly understandable for audiences to attend a comedy show under the assumption they’ll be humorously entertained, the moments of seriousness and self-reflection are often what stay with you.  Such is the case with Poncho Orange: Keep It Up!, the latest one-man-show from melting pot oddball clown Dani Cabs, a 60-minute journey into his unique mind that’ll have you beaming and braining in equal measure.

Though there are times that Cabs himself peaks through – the show itself has a scrappy energy to it that plays as if Cabs and the character of Poncho are interacting – the orange-adorned creation that is Poncho Orange dominates much of Keep It Up!‘s running time.  If Manuel, the Barcelonian waiter from Fawlty Towers, had a much rawer sex appeal he’d probably be something akin to Cabs’ lean, comically-bulged Poncho Orange.  As is tradition with the best comics and clowns, any ego or vanity is wholly stripped from proceedings, and given that so much of Keep It Up! relies on the character to gloriously make a fool of himself, its success is largely attributed to how free Cabs feels at the helm.

That freeness often speaks to a certain vulnerability, and not just Cabs’ as a performer, but his audience’s too.  The underlying theme of the show is that of consent and, by extension, toxic masculinity.  Yes, you may be thinking how entirely not funny that sounds, and there are brief moments of Keep It Up! that place buffoonery and incredible randomness aside for heart-breaking admissions involving abuse, but so much of Cabs’ show cleverly comments on how “no means no” in a manner that never feels as if we’re being lectured.

Sexually suggestive performance pieces involving an orange and a banana embrace the wonderful normality of bisexuality; Poncho’s not-always-stronghold on the English language allows a slew of cheeky wordplay whilst avoiding such a translation loss as a punchline; and allowing the audience to vote on what they think should be the “safeword” for the evening means that conversation over consent is introduced in a subtle, comical fashion that lingers throughout.

It’s difficult to accurately describe just what type of show Keep It Up! is, but the bold awkwardness and incredible randomness of Poncho Orange and what Cabs has created means this is truly a production best seen to be believed and understood.  What he is talking about here deserves to be heard by a wide audience, and hopefully enough patrons will come for the allure and stay for the education.