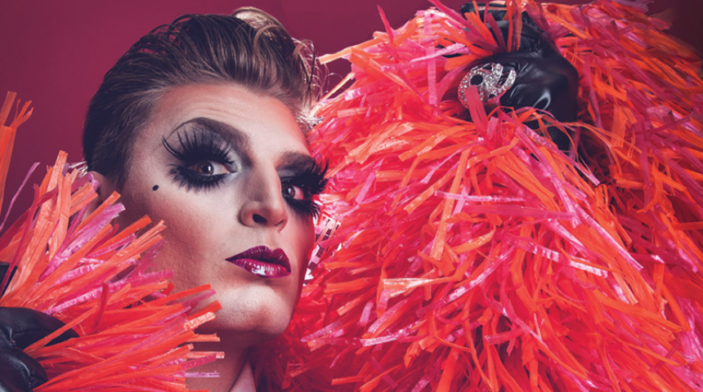 Reuben Kaye is no stranger to Adelaide audiences. He is entertained and delighted us over several festivals and fringes. As emcee tonight, Kaye invites us down his late-night Kaye Hole with a group of fellow performers.

The Kaye Hole is a safe place, except if you’re a straight heterosexual man who, for once, find themselves on the wrong side of the fence – but in a good-humoured way. The Kaye Hole is a diverse collection of cabaret acts, with the superb backup band.

Loki Rickus is the first guest performer on stage. With a shock of blonde hair and powerful tattooed muscles, drag performer Rickus performs with hula hoops while sitting in the confines of a wheelchair. This show is a good opening for what is to come.

In between acts Ruben plays and toys with the audience. This familiarity lets down the guard so much that he has to remind the audience about basic courtesy of not walking in and out in the middle of a performance. Particularly when the next performance of Ella has her shooting an arrow with her feet whilst upside down in a handstand. Sitting in the front row, this reviewer wanted all of her attention in the right place.

Flynn V has an unusual relationship with lipstick. Tottering on stage in high heels, brown trousers, white shirt and a smear of lipstick on his face he soon descends into a type of madness. Spilling his treasure trove of lipsticks from his suitcase all over the stage he strips and covers himself in lipstick by the end of the performance. This is his show and he’s owning it.

Tina Twist is most surely known to Adelaide cabaret audiences. Her attempts just stay upright and sober are hilarious to watch. The audience participation line “we love you Tina” is the highlight and has the audience in stitches. Even the band couldn’t help themselves laughing.

Emily Chilvers rounds off the show with a techno charged routine whilst hanging from a dangling rope.

As they say in the classics, leave ‘em laughing as you go. Kaye had moments of seriousness, particularly mentioning how difficult it has been over the past year for artists, the ongoing LGBT difficulties, political turmoil, and human rights abuses. But we weren’t here to be lectured to, and the entertainment made us all forget about the outside world for a moment. The Kaye Hole is a safe space for the marginalised and an education for the others.

Welcome to The Kaye Hole.

The reviewer attended the performance on March 4th.

The Kaye Hole runs at The Octagon – Gluttony until March 20th