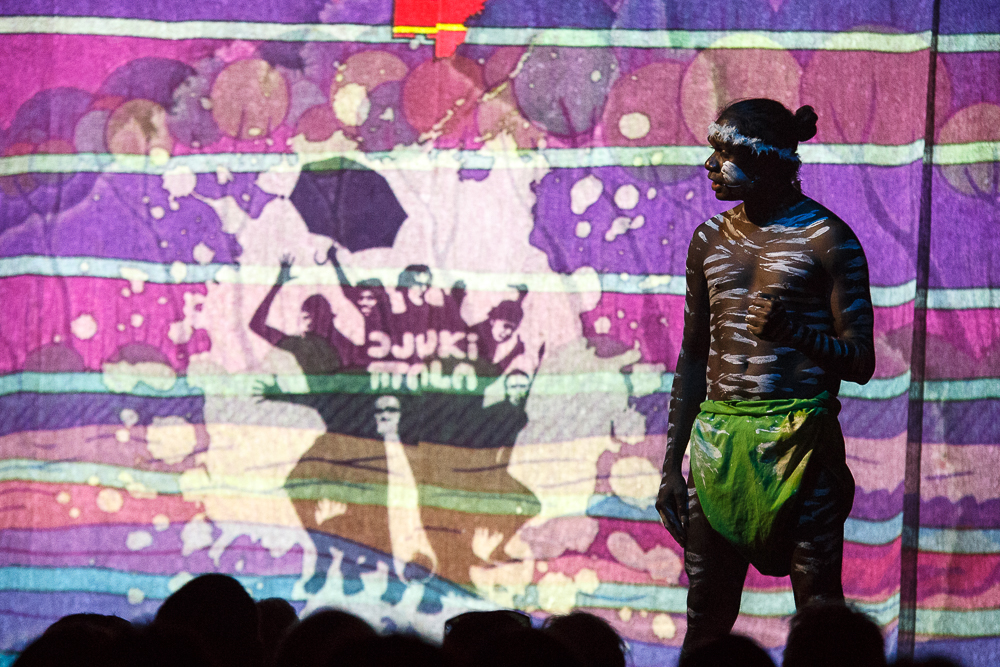 North East Arnhem Land dancers Djuki Mala return to Adelaide Fringe this year to once again deliver their high-energy, and highly original dance performance, and it should be on the top of everyone’s must-see list!

Beginning their performance with traditional dance, Djuki Mala demonstrated their skill at telling a story through movement, whilst behind them projected images set the scene and the tone for the performance, or so we thought. All of a sudden, the tone of the evening changed dramatically, and if you have never seen Djuki Mala before you could be forgiven for thinking that someone accidentally loaded the wrong track onto the playlist, as the dancers launched into “Zorba the Greek”. The story behind Djuki Mala’s take on “Zorba” has its roots in family and friendship, and as we learnt, it was thanks to a YouTube video of this number that the troupe were propelled to where they are today.

This off-beat, and unexpected dance brought a huge smile to the faces of the audience, who clapped along, faster and faster as the music quickened. The dancer’s delightful sense for the comedic was as perfectly timed as the rhythm of their movements. The remainder of the show took the audience on a journey through dances of other cultures, and then through the decades. They included in their show a Bollywood-influenced performance, as well as their take on Singing In Rain, where they spiritedly dance around bright coloured umbrellas. The audience are transported through dance from the crooners of the 1950’s, through disco, and to hip-hop.

Djuki Mala meld together elements of their traditional dance into each seperate number, creating something totally unique as they do so. They deftly combined traditional dance, modern dance and comedy, all whilst continuing to juxtapose their dancing against moments of storytelling throughout. Projected videos of the artists family were shown between each dance, and told the stories of the group’s beginnings, their culture, and family, in the process allowing us to learn about the motivations behind Djuki Mala.

The performance as a whole is the perfect Fringe show: an hour or so of pure entertainment, which delivers a clear message – that the culture of the Yolngu people, like that of all indigenous cultures, is so valuable, and that dance is an important way for them to celebrate their cultural inheritance.

Djuki Mala mix perfectly the traditional and the whimsical, framing the performance of their Indigenous dances within the story of dance as a whole. They are skilled dancers, who are equally skilled at making their audience smile. This is one performance that can’t and shouldn’t be missed!

Djuki Mala will be performing at Umbrella Revolution, in the Garden of Unearthly Delights as part of Adelaide Fringe from February 20th through to March 17th. For more information on the show and to purchase tickets head HERE.