Adelaide Fringe Review: Arcadia takes us on an unknown journey 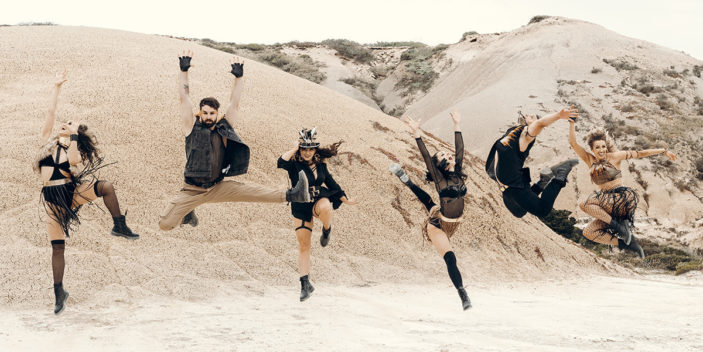 As the lights go down in the Octagon tent in Gluttony, three dancers emerge on stage in billowing sheets. It sets a sexy sultry mood. Arcadia is described as a “Journey to a desert utopia celebrating idealistic social values of the wild and free.” The mood suddenly changes as Stevie Wonder’s “Higher Ground” sounds out. Performers in skimpy black leather costumes gyrate and bound about the performing space. The stage extends into the audience in the round giving everyone a good view of the action.

Songs “Without Love”, “Is this Love?”, “Say that you Love Me” all point to a budding romance. But whose? The dancers are sultry and sexy, two boys and four girls, and they interact well. The acrobatic strength and skill in the whole cast is on display.

Most of the songs are pre-recorded. However, some are covered by one lead songstress, who also carves out a shimmering mean electric guitar. Is there a shattered love affair in play? Dramatic solo dances come next, followed by a poignant rendition of “Not Enuf Love.” Has love died?

There are more costume changes and suddenly an aerialist takes to a hanging hoop. This marks a point where the show turns white. “Tell Me Lies” and “Sweet Dreams” point perhaps to the love phase of denial. By this stage also, there was a lot more audience interaction as performers came up to the stage from behind the crowd.

A humorous reverse striptease was clever and quirky, but like most of the show, it was hard to follow if this was a part of a story or simply another sketch. It was probably the funniest part of the show. Overall, the performers clearly enjoyed themselves, the costumes and lighting were incredible, the dancing was skilful and the songs nostalgic, but the journey was a little confusing. The performance was wordless, and like a mixtape, the music was meant to tell the whole story. With the dancers changing costumes and roles so often it was difficult to assign a persona to them.

All the elements were there, with over twenty songs covered in the hour, but it was confusing to understand exactly what Arcadia was meant to achieve. Was there meant to be a journey or was it just an excuse to watch beautiful people in exotic costumes dancing to your favourite hits for an hour? With so many Fringe acts offering similar fare, there needs to be “something more” to shake the audience. The early 6 pm timeslot was perhaps working against what I imagine would be a fun late-night cabaret show. Arcadia is a good show which could easily become a great show if the journey was clearer and presented in a more story-telling manner.

The reviewer attended the performance on 23rd Feb