What the critics are saying at the 75th Venice Film Festival

2018 marks the 75th anniversary of the oldest film festival in the world. Once again, Venice invites motion pictures and filmmakers from all over the world to participate in the annual show. The Festival, which premieres some of the year’s biggest films and hottest Oscar contenders, is running until the 8th of September. Here’s a look at just a few of the biggest screenings at the festival so far and what critics have been saying.

Headlining this year is Damien Chazelle’s First Man, telling the story of the first man to walk on the moon, Neil Armstrong. Exquisitely portrayed by Ryan Gosling, the film guides us through Armstrong’s private life and the events leading up to the space expedition in 1969. After movies like Whiplash and La La Land, the critics are again fond of Chazelle’s work as a director. While the emotional and tense story, alongside the fantastic technical craft, have been praised by BBC reviewer Nicholas Barber, the rich political backstory of the 1960s is barely a topic. The movie is a close up on Armstrong’s story, while other characters are kept to a minimum. Barber criticises that Armstrong’s partner Buzz Aldrin barely appears in the picture. Overall, First Man has been acclaimed as a successful personal drama.

The Ballad Of Buster Scruggs

This year, Venice is introducing once more a Coen Brother collaboration. The Ballad of Buster Scruggs was originally planned as a six-episode Netflix series but was adapted into a movie with six different sketches. Set in the environment of the old-school American western, the movie has a humorous yet glorifying attitude towards gory violence. A collected anthology of six stories from the Wild West, of which Owen Gleiberman from Variety Magazine calls some entertaining, but some “just too much of a just okay-thing.” Shot in the beautiful landscapes of the southern states, the weaker episodes might have you focused on the surroundings instead of the story. 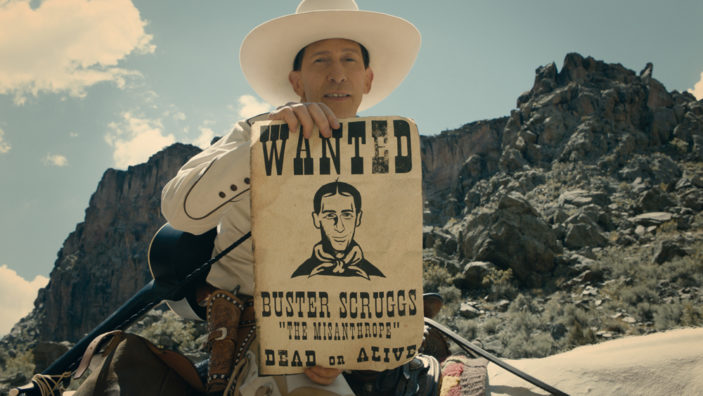 Oscar winning director Alfonso Cuaron returns to Venice premiering his newest piece of work, Roma. The black and white movie is set in 1970s Mexico City and evolves around a young live-in maid, Cleo. She finds out about her pregnancy just as the patriarch of the house disappears, leaving her and the stressed mother with four children and a debt to take care of. The Guardian reviewer, Peter Bradshaw approves the authentic street and crowd scenes, which make all of us feel like we have lived 70s Mexico City. Cuaron tells the story of Cleo’s fate in the face of class conflicts and domestic crisis with carefully chosen shots. Roma is the emotional personal story of a struggling woman brought to us by an experienced and delicately used lens.

A Star Is Born

Bradley Cooper is debuting as a director with a wonderful outcome. Starring himself and Lady Gaga, A Star Is Born, draws us deep into the often retold story of Jackson Maine, a drunken country singer who falls in love with a talented but struggling musician, Ally (Gaga). He helps her gain recognition, but when her fame eclipses his own, he begins to struggle with self-doubt while Ally’s success is taking off. David Rooney, The Hollywood Reporter, lauds how in this tragic love story, Gaga lets go of her pop persona and comes to life as the wonderfully acted, vulnerable Ally. Her and Coopers onscreen chemistry and outstanding performances are undeniable. Although the film features a rich personal story, Rooney critiques that it misses out on going into the subtext of how women in the music industry are being bent to fit into the narrow line of popularity.

The Other Side Of The Wind

The “lost” Orson Welles film is finally giving its debut, fifty years after being shot. Portraying a film crew struggling to finish their project, the story is anything but obsolete, like one might think. In the current day especially, independent movies struggle with funding issues. Director Welles told a story of creative struggles and self-questioning with a witty humour. Ironically this project was not finished in his lifetime as Welles passed away in 1985. But, his 100-hours of material has been cut by Bob Murawski with excellence. With the help of executive director Peter Bogdanovic and Welles’ daughter Beatrice Welles, it turned out, as Peter Bradshaw (The Guardian) called it, “every bit as brilliant and chaotic” as expected. Premiering in 2018 is an experimental autobiographical film transporting the audience back to the 70s.

For more details about the Venice Film Festival, head to http://www.labiennale.org/en/cinema/2018