Film Review: V/H/S 94 gives the franchise a much-needed grisly reboot, with all the right snuff 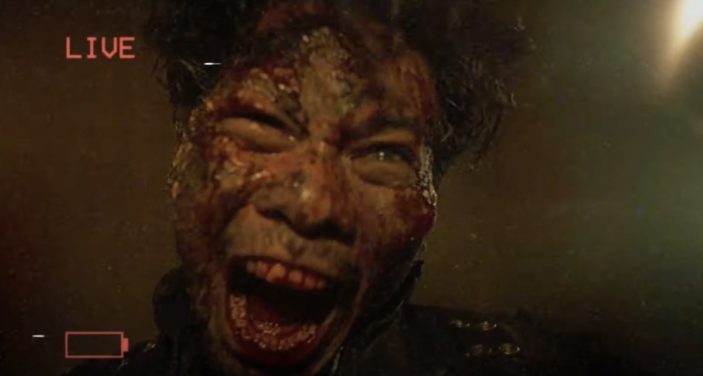 The V/H/S franchise has returned. The franchise revolves around the subgenre of found-footage and is led by the renowned horror genre website Bloody Disgusting. So far, we have had three anthologies headed by numerous acclaimed directors including Gareth Evans, Timo Tjahjanto, Ti West, David Bruckner, Adam Wingard and many more. The critical reception of the franchise was overall well-received — with an inconsistent yet effective starting entry, a welcome improvement in the second entry and a disappointing final entry.

Now we have V/H/S/94, a reboot of the franchise made during COVID-19 restrictions with returning franchise alumni Simon Barrett (returning now as director) and Timo Tjahjanto; as well as new blood with acclaimed filmmakers Chloe Okuno, Jennifer Reeder (both the first two female filmmakers in the franchise) and Ryan Prows. Will the latest entry make up for the slump and bring in much-needed energy to the franchise?

Set in the year 1994, the set-up and wraparound of the film involves a SWAT team who are executing a drug raid in a warehouse where it is supposedly where the drugs are manufactured. But little to the team know is that the true nature of the warehouse is that it is a secret cult facility that is littered with VHS tapes that hint at some sort of sinister conspiracy. We follow four of these tapes as they all add up to what the conspiracy really is.

The wraparounds are mainly seen as filler and do not really add to much in terms of scope (especially the ones received in the prior VHS films). Even if the acting is over-the-top (to a chortleworthy over-the-top degree), Reeder thankfully provides the visuals that are appropriately grisly and they fit the nature of underground films of the nineties like Face of Death film series and the Guinea Pig films. She sets up expectations of the tapes succinctly and ends the film on a memorably amusing splash of feminine bloodlust that calls back to the linking thread of the prior shorts as well as redefining what a popular horror lexicon term really is.

This tape revolves around Holly (Anna Hopkins), a controversial and tenacious reporter who is assigned to investigate the rumours of a supposedly supernatural entity that is known by locals as the “Rat Man”. As she and her hesitant cameraman venture into the titular storm drain to get the story, they discover something far more shocking than they ever could have imagined.

Brushing this critic’s personal musophobia aside, Storm Drain is a simple and effective short from Okuno. She sets up the characters effectively and her sprinkling of arch humour via characterizations (like Holly’s ambition always involves exploiting something for her gain eg. the homeless, her cameraman), media satire (which includes a commercial that impedes the danger in the story with acute timing) and her cine-literate [sic] reverence makes it a fun experience.

As for the scares, the feeling of claustrophobia in the storm drain setting is startling (helped by the grimy cinematography) and the diegetic sound design that reflects the setting as well as the recorded nature of the footage is remarkably immersive – the echoes, the water, the footsteps – are all well-executed.

The film builds up to a climax where the entity is revealed and it concludes the film on a high note; with generous lashings of gore and a darkly funny final note that had to be a nod to filmmaker Joe Dante. A good start to V/H/S/94.

“The Empty Wake” by Simon Barrett

This tape revolves around a funeral home attendant, who is hosting a wake overnight while recording footage for the memorial for the deceased. She is hesitant of the nature of the job but her boss reassures her that there is nothing to worry about and for the most part, she will just be sitting there until she records enough footage for the memorial.

But as she sits through the night, the weather becomes tumultuous as storm clouds and heavy rain suddenly hit the home. She then witnesses strange occurrences like flash blackouts, noises from the coffin and the positioning of it repeatedly appearing slightly ajar. Then things take a darker turn when she discovers the nature of the deceased, which leads to one memorable evening.

Continuing the nature of Storm Drain, The Empty Wake is another effective short in that its low-key nature fits perfectly with the order of succession of the anthology. The cinematography in particular is remarkably accurate in how era-appropriate it looks; especially in how it captures the lighting in that faded way and how the smooth motion accentuates the movements in the off-kilter occurrences.

The intimate nature of the story like the limited number of characters adds to the tension and the clever use of gore in the climax (essentially a nod to body horror like the films of Stuart Gordon) is both witty and adds a sense of unpredictability to the proceedings. As for its flaws, the inclusion of exposition in regards to the nature of the deceased is included awkwardly, Also, the short ends on an unmemorable note that could have packed more punch due to the pacing since the climax begins and ends far too quickly.

“The Subject” by Timo Tjahjanto

This tape follows the recordings of a mad scientist as he attempts to make soldiers that are half-human/half-machine. A kidnapped woman wakes up in the dingy lab of said mad scientist and must contend with her humanity, the clutches of the scientist and the upcoming police raid that may or may not be a rescue attempt.

With numerous nods to both sci-fi and body horror like Robocop (questioning identity over one’s humanity), Re-Animator (many sight gags involving the flesh that are inexplicably filled with life), the Guinea Pig film series (the visuals are grimy and feel like they were taken from snuff films), Tetsuo – The Iron Man (the numerous creations involving many metallic devices) and even Full Metal Yakuza; Tjahjanto brings on the cinematic touch that made his works such genre standouts – bloodletting mayhem with strong survival instincts and love of early genre cinema.

Tjahjanto lets the audience in on the aesthetic on frame one with marvellous creations of man/machine hybrids and escalates the suspense as we follow the point-of-view of the female victim via live recordings. Even with the noticeably CGI moments and the jarring inclusion of both non-diegetic music and exposition via news reports, all is forgiven when when the proverbial shit hits the fan. Tjahjanto lets loose in the final act as he brings up many inspired moments of grisly deaths involving sharp blades, huge guns, numerous explosions and even one death that could only come from a head full of brains.

Much like Tjahjanto’s last effort in the franchise Safe Haven (in which he co-directed with Gareth Evans), The Subject is the standout of V/H/S/94.

This tape follows a white terrorist group as they plan to overthrow the US government by exploiting and weaponizing a supernatural force that is shown as an ordinary man who is captured and tortured in captivity. We follow the hijinks and cruelty they enact on him while they strategize their plan. But little do they know, the absolute power they have in their hands may be more than they could ever handle.

Functioning as both a satire on American extremism as well as a horror experience, Terror works well enough on both as director Prows portrays his characters with both malice and buffoonery. The hijinks itself are quite funny as they go through many attempts at trial and error; resulting in hilarious results.

However, the horror experience is the expected bloodletting and mayhem. The buffoonery is reminiscent of the toxic leeriness moments in the first V/H/S film that is just wasteful filler and since the short comes after Tjahjanto’s, it does feel a bit numbing. In addition, the inclusion of the supernatural force implies a sense intrigue but it really is no much more than a plot device. At the end of the day, it is an entertaining short from Prows in its own right but its place in the overall film, it cannot help but feel like a bit of a letdown.

Overall, V/H/S/94 is a great return to form as it provides a fun, grungy and horrific experience that adopts its new era-appropriate aesthetic to bring new life and energy to the franchise.

V/H/S 94 just had its world premiere at Fantastic Fest and will have its streaming premiere on Shudder on October 6th.