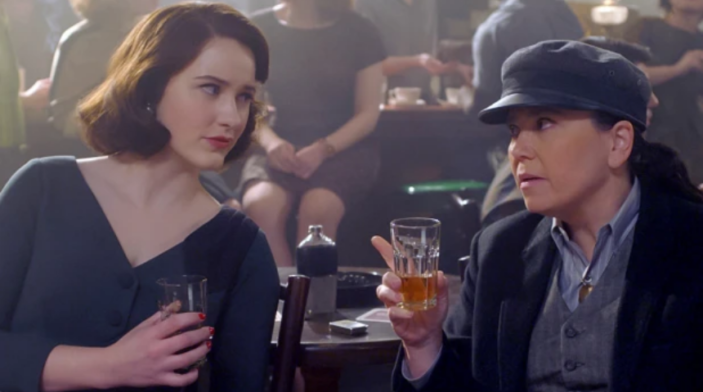 Amy Sherman-Palladino’s The Marvelous Mrs. Maisel has returned for a fourth season of lighthearted 1960’s shenanigans and based on the first two episodes it looks set to be just as quick-witted as ever. The spirited comedian Miriam ‘Midge’ Maisel (Rachel Brosnahan) is back in New York City after she was abruptly removed from Shy Baldwin’s (Leroy McClain) international tour – now it’s time to see what her next career move is.

As always, the brilliant ensemble cast of characters are the best part of The Marvelous Mrs. Maisel. Alex Borstein continues to give a stand-out performance as Susie Myerson, Midge’s endearingly jaded manager, bringing a sense of reality to a show that has a permanent rosy filter. Midge’s parents, Rose and Abe Weissman (Marin Hinkle and Tony Shalhoub), already have a variety of hilarious scenes, from rescheduling their grandson’s birthday when the timing was bad for them to Abe sitting in an (empty) bath with his typewriter because he needs a ‘cosy’ writing space.

The main issue with this season – and the series as a whole – is that it’s almost impossible to feel sympathy for a character that takes no responsibility for her mistakes. Feminist plot points where Midge defies the sexist roadblocks of the time period are all well and good, but it can get a bit frustrating when she doesn’t admit that she was the cause of her recent career setbacks.

Instead of trying to make amends or feeling guilty after she almost forces Shy Baldwin out of the closet on stage, Midge blames him for her situation. The first episode opens on her doing a stand-up set where she rants about wanting revenge and actually says ‘once again a man has stepped in and fucked up my life.’

Is the show purposefully leaning into Midge’s character flaws and exposing her as a privileged white woman who always gets her way? The second episode sees her taking on an apartment and countless tabs that she can’t afford because she won’t let go of the upper-class life she once led. Could this be setting things up for a dramatic downfall and perhaps a redemption arc? It does seem like Sherman-Palladino is determined for us to like Midge though, and considering that the flaws of certain Gilmore Girls characters were never addressed, maybe we shouldn’t get our hopes up about Midge.

One promising idea from these first episodes is that Midge has decided to talk about real topics in her stand-up. In recent seasons, her sets have focused on rather safe jokes about life as a Jewish housewife, which detracts from her supposedly renegade figure. If she begins to talk about darker, more real things (without ridiculing members of marginalised groups this time), then the comedy could reach the level of that unforgettable, drunken show from the first season.

Fans of the show will be happy to know that The Marvelous Mrs. Maisel’s writing is still incredibly clever, featuring outwardly mundane scenes that become pure genius through those trademark fast-paced conversations. One scene where the classic banter really shines is when the whole clan – Midge, Rose and Abe, ex-husband Joel (Michael Zegan), and Moishe and Shirley (Kevin Pollack and Caroline Aaron) – are all riding a ferris wheel in Coney Island and yelling at each other from separate cabins.

Even if the series suffers from Midge’s self-centred approach to life, The Marvelous Mrs. Maisel retains the elements which made it a success: endless charm, delicious retro costumes and sets, and that winning Sherman-Palladino writing. Let’s hope that the rest of the season features Midge finally facing some consequences for her actions, so we can start to cheer her on as a relatable and likeable heroine once more.

The first two episodes of The Marvelous Mrs. Maisel Season 4 will be available on Amazon Prime Video from February 18th, with two more episodes being released each Friday (eight in total).