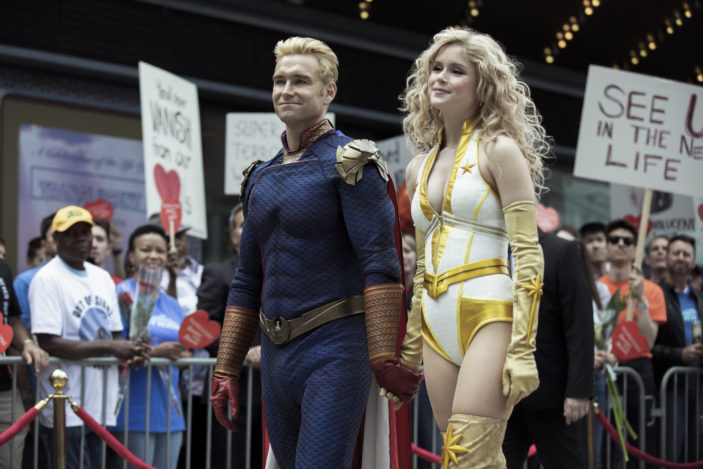 For the majority of the first episode of this second season helping of The Boys, Karl Urban‘s mouthy, unpredictable Billy Butcher is largely absent.  And it’s with his absence from the titular crew – which also consists of Jack Quaid‘s Hughie, Laz Alonso‘s Mother’s Milk, Tomer Kapon‘s Frenchie, and Karen Fukuhara‘s Kimiko – that the show and the group’s dynamic feels alarmingly different.

Having become fugitives at the conclusion of the first series, there’s a desperation among the group as they try so tirelessly to find a lifeline to help them secure a sense of normality.  And as much as we’d like to believe their efforts will be rewarded, The Boys‘ first season became synonymous with a bait-and-switch mentality that it’s difficult to trust much of what unfolds in the first few episode offerings here.

There’s an almost grounded, realistic temperament to the first episode that seems to imply that this season may be less bombastic than its predecessor, but just as those credits are about to roll, in walks Butcher to assure both his crew and us as an audience that isn’t about to happen.  With his cockney-lite accent and affinity for R-rated language (much like the first season proved, here there’s no filter on profanity or violence), Butcher is the undeniable magnet that draws his Boys together – even if it’s against their best judgement.

As his motivation continues to centre around his wife (Shantel VanSanten), and Hughie’s revolving around the continued outing of Vought regarding Compound V, this second season doesn’t appear to be in too much of a hurry to tie up some of the loose ends the first season presented.  Hughie may have saved A-Train (Jessie T. Usher) from an overdose-induced heart attack, but he still hasn’t exacted his revenge pertaining to the death of his girlfriend, whilst Starlight (Erin Moriarty) remains conflicted in her duties as a member of The Seven as she’s surrounded by the most amoral of colleagues.  These are storylines that are touched upon, but it’s evident they aren’t going to be resolved anytime soon, especially as the brutal blows The Seven were dealt are still finding their own fixtures.

Homelander (Antony Starr, leaning even further into the character’s sadism) is exercising his own unique way of coping with his murder of scheming Vought vice president Stillwell (Elisabeth Shue), The Deep (Chace Crawford) remains in exile and may have found himself in a cult-for-Superheroes, and the ethical compass of Queen Maeve (Dominique McElligott) appears to be swaying more and more towards the light as her fear and distrust of Homelander grows ever prominent.  In fact the added emphasis on Maeve and Starlight lends this season a more balanced personality in its treatment of its female characters, which extends to Kimiko as well, a welcome dimension to her character that appeared severely lacking in the first season.  Fukuhara does so much without the additive of verbal dialogue, and the revelations afforded to her backstory provide the actress with arguably some of the season’s strongest work.

Perhaps the most prominent character that benefits from The Boys‘ female-skewed mentality is Stormfront (Aya Cash), a new additive to Vought’s superhero line-up whose no-f**ks-given attitude makes her an instant stand-out.  She’s someone who doesn’t care for what Vought publicly stands for and, unlike the more complicit Starlight, she has no qualms in voicing so.  Cash’s brash delivery is at once wickedly funny and disturbing, especially as she butts heads with Starr’s Homelander, who may be quite unprepared for what she specifically stands for; those familiar with her character’s arc in the comic series – where she was depicted as a man – will be all too familiar with what she’s capable of.

As much as the show pushes a new, unsettling mainframe for Homelander – including his relationship with his son – this essentially only maintains the importance of Butcher and how The Boys is very much his show.  Butcher’s wife sharing her son with Homelander gives him a sense of urgency, which in turn fuels the Boys to persevere through their bid to take The Seven and the Vought Company down.

Given that a third season has already been announced, with Supernatural alum Jensen Ackles signed on, there’s a certain level of comfort that comes with watching this series, but that certainly doesn’t remove any element of surprise or threat that this tightly-paced season manages to create.

The Boys Season 2 will premiere its first three episodes on Friday September 4th 2020 on Amazon Prime Video.  New episodes will then be available weekly each Friday following, culminating in the series final on Friday October 9th 2020.