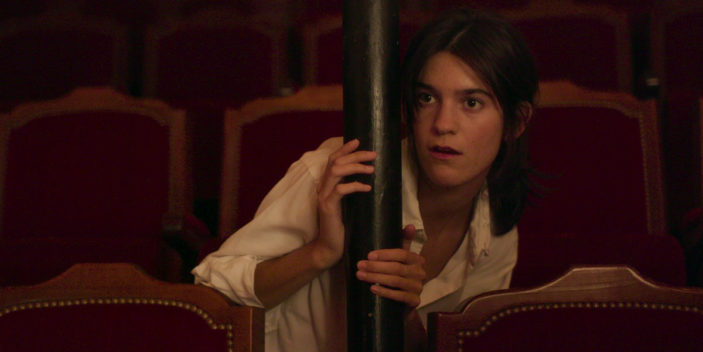 Writer/director Suzanne Lindon stars as Suzanne, a 16-year old student who is starting to feel a sense of ennui as she trudges through her daily routine of high school adolescence. Her mingling with her friends is becoming tedious and boring – evident in an amusingly awkward party sequence – and her outside life feels constrained due to her family being occupied with their own predicaments, even though her family loves her.

But one day, during her daily walk to school, a spark catches her eye in the form of Raphael (a handsome and charming Arnaud Valois), a 30-something year old theatre artist and an attraction starts to grow between the two. But as they grow more intimate, Suzanne starts to feel like she is losing herself and growing out of her adolescence too quickly; bringing herself into quite a conundrum.

Spring Blossom is Lindon’s directorial debut; making her first impression at age 20. She had started writing the script at age 15 and worked her way through to now. It may be strange to start a review referencing a writer/director’s age but in the case of the story of Spring Blossom, it bears mention as it affects the storytelling in both notable and flawed ways.

Firstly, there is a level of verisimilitude in the storytelling that is greatly appreciated as Lindon conveys the crippling ennui of her two lead characters. She stages them (with great support by Jeremie Attard) in simple yet effective ways; through long takes and medium shots that frame them in the middle between two other obstacles, showing their institutionalized states of mind. Like how Suzanne feels out of place as she finds herself in a group conversation between all of her friends or how Raphael feels distant as he stands between his theatre director and scene partner; listening to lines of scripted dialogue over and over.

That is not to say that the film is a gritty take on coming-of-age tropes since there is a sense of naivety that makes certain scenes feel strangely graceful. Moments where Suzanne is embracing her new chapter in life eg. When she asks her parents questions about relationships or how she reacts with glee when her attempts to achieve success with her romantic entanglements (her interactions with a mirror) are both cringing and relatable.

Lindon conveys the chemistry between her character and Valois’ character in wonderfully succinct ways. In a standout scene, Raphael shares his taste in opera by sharing Suzanne a sample overture from the play he is acting in. The scene is shown in a wide shot and the two are sitting together (in separate tables); they respond in sync to the music as they are entranced. It is that combination of fantasy and intimacy that makes Spring Blossom soar.

But ironically enough, it is that same naivety that holds it back from true greatness. There are moments in the story that feel contrived and awkward due to the fact that it just escapes the mindset of writer/director Lindon. The age difference between Suzanne and Raphael is an issue but for different reasons one would expect.

The existence itself is not the issue but the rather aloof reactions from those around the leads; which is quite troublesome. Raphael invites Suzanne to meet his co-workers and it just never becomes an issue to be talked about. Her parents (Florence Viala and Frederic Pierrot) are almost unbelievably understanding of Suzanne that their presence in the story never feels like a source of tension if the two were to find out about Suzanne’s relationship. To be fair, Lindon never places the age difference front and centre (and her character is the pursuer, not vice versa) nor does she approach it implicitly but its presence is still there.

The establishment of the settings and family also feels a bit too perfect (upper-class status, beautiful household, doting family members etc.) that it dilutes the dramatic potential. While the runtime (a brief 73 minutes) is still stretched out as it lacks a dramatic force to push the story forward towards its understated ending.

Overall, Spring Blossom is a light, frothy and charming drama from Lindon, who shows great potential in becoming a formidable director in the future. Recommended.

Spring Blossom screened as part of the Toronto International Film Festival, which is taking place mostly digitally this year. For more details head to tiff.net.