TIFF Review: One Night in Miami is an electrifying film directorial debut for Regina King 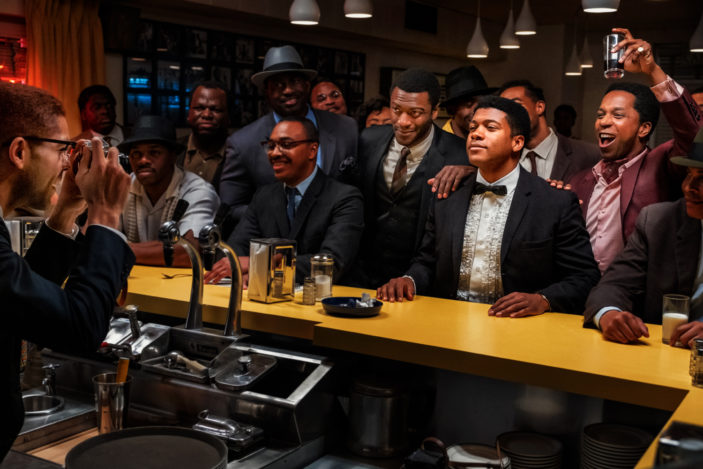 In America 1964, the audience is introduced with its four main players. Renowned boxer Cassius Clay (Eli Goree) had just defeated Sonny Liston to become heavyweight champion of the world; Muslim minister and human rights activist Malcolm X (Kingsley Ben-Adir) is still fighting for the cause for Black people; pop musician Sam Cooke (Leslie Odom Jr.) is on a gradually sliding scale with his music career and popular football star Jim Brown (Aldis Hodge) had just got back from visiting a fellow white supporter (Beau Bridges), whom unknowingly(?) and thuddingly brings him down back to Earth to let him know his place in the world.

The four meet up at a lavish hotel in Miami to celebrate Clay’s win by partying all night long and the night starts off well enough, with all the expected playful rapport amongst friends. But as the night goes on, the banter dissipates as they get into their predicaments; which brings up conflicts through differences of opinion. The deeper the discussions go, the murkier the viewpoints become.

One Night in Miami is the feature-length directorial debut from Regina King, who has had experience in directing primarily in television alongside a sterling acting career (fresh off of the HBO series Watchmen and an Oscar nomination for the 2018 drama If Beale Street Could Talk) over the past 35 years. To take on an acclaimed play by Kemp Powers (who also wrote the screenplay) which involves four well-known personalities is a huge task for any director/screenwriter. Not only do they have to keep the spirit of the play intact but they also have to make the storytelling cinematic enough to avoid tedium that can come from inherent staginess.

Fortunately, King and Powers have succeeded with flying colours by delivering a thematically powerful and emotionally riveting chamber piece that is sure to pick up awards buzz. King spends the first twenty minutes of the film setting up the characters and their discrepancies (civil rights, inherent racism, dwindling careers, rise to power) efficiently enough that even though it has the appearance of lacking focus in its storytelling (especially for those who are unfamiliar with the play that the film is based on), the opening title card comes up and shows you King knows exactly what she is doing.

The film comes to a smooth groove as the four main characters meet up; with the cast succeeding in developing the right chemistry that displays warmth, enthusiasm and hints of passive-aggressiveness. The production values feel vibrantly evocative of the 1960’s down to the cars, costumes and especially the settings. Thanks to the sufficient contributions from cinematographer Tami Reiker (fresh off the Netflix film The Old Guard), King navigates the tension brimming within the characters as she establishes the geography of the hotel room through long singular-takes, overhead shots and shots seen through reflective surfaces.

The sharp editing by Tariq Anwar (Oscar nominated for his work in the 2010 drama The King’s Speech) accentuates the power of the conflicts between the characters, weaponizing the performances. Even as something as simple as Clay alerting his friends as he notices his reflection in the mirror not only hits a successfully humourous note, but it also provides shrewd foreshadowing that hints something more underneath Clay’s blatant façade.

Speaking of façades, the performances from the main four leads are extraordinary from across the board. In a perfect awards consideration system, they would all be considered for Best Actor as opposed to Best Supporting Actor because they all make their mark so perfectly as the avoid mere impersonations of historical figures and get into the hearts within.

Ben-Adir is awe-inspiringly persuasive as X; delivering a force of righteousness and sternness alongside a side of empathy while Goree is a lot of fun to witness as Clay with his boisterous energy but he reveals surprising vulnerability when ideas of doubt sink in due to terms on converting to Muslim. Odom Jr. is smooth and winsome as Cooke who provides the perfect foil for Ben-Adir as their characters clash on how Black power via celebrity status can pay off or how their contributions to the Black community actually do contribute. Last but definitely not least is Hodge, who is brilliantly understated as Brown as he provides a dignified and respectful presence that effortlessly brings the propulsion of the conflicts around him down to Earth; making them viable for reflection.

As for the film’s flaws, the staginess inevitably comes through at times and the dialogue can be seen as on-the-nose. But oddly enough, that kind of mentality fits the characters; especially in the case of Malcolm X as he delivers his monologues to his friends as if he were in a crowded debate with them rather than actually conversing with them.

Throw in a bittersweet ending that beautifully hints the futures of the leads as well as hinting the nature of the very conflicts is far from over (even in the world today), One Night in Miami is a real winner from director Regina King. Highly recommended.

One Night In Miami is screening as part of the Toronto International Film Festival’s digital program. Head to tiff.net for more details.

The film will debut internationally on Amazon Prime Video on 15th January 2021.