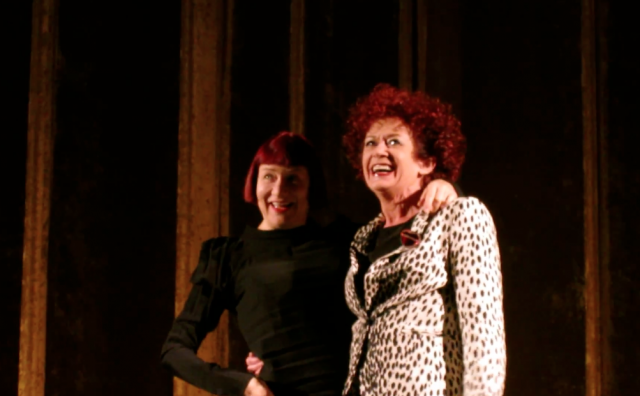 Stars from the cult classic The Rocky Horror Picture Show Patricia Quinn and “Little Nell” (Nell Campbell) sat down with Larry Heath, to discuss their enduring love of Rocky Horror, each other, the wackiest tributes they’ve been given and the impact the show still has today.

Thanks for talking to me today. There’s such a long history with this film, and the show — I don’t even know where to begin!

Patricia Quinn: So am I.

And not a day past! So you’re coming to these conventions, mainly to talk about the film, but I understand there’s a screening time, too?

Patricia Quinn and Little Nell [Singing]: She had to go and lose it at the Astor, she didn’t take her mother’s good advice.

What’s it like, coming to these sorts of conventions, and getting to talk about this film?

Little Nell: Well, we’re thrilled to be here. The fans are always so heavenly, and are delighted to meet us, so naturally we have a ball.

Patricia Quinn: Yes. I wanted a question and answer, which I did in Canada when the Toronto shadow cast came in. There was a stunning young girl, and she opened “Science Fiction” with a burlesque, and it was absolutely riveting. She was so gorgeous. And I thought, ‘That’s new.’

What’s the strangest adaptation that you’ve heard about, or seen?

Little Nell: Someone who was working for the Senate in America in their summer holidays once told me that they all did “Time Warp” over there. In the Senate.

I hope at least one of them was dressed in drag.

Patricia Quinn: I was just asked to go home to Belfast, which is where I’m from in Northern Ireland, and the BBC decided they needed to raise my profile. And the young boy who was in charge of this program had first gotten into the Rocky Horror thing when he was on his university holidays, working at the Belfast Opera House. The people there said to him, ‘There’s a show coming in where you’re going to have to wear shorts and fishnet stockings to sell your programs,’ and he said, ‘Oh, alright then.’ And he’d never heard of Rocky Horror Picture Show before—

Patricia Quinn: Oh no! But I think he got into them, because that’s why he’s been after me ever since, to “raise my profile”. And now he’s done a campaign to have a statue of Magenta in her spacesuit, in Northern Ireland.

I was reading about that. Is that actually happening?

Patricia Quinn: It is! There’s a massive petition, and it’s with the Belfast Council at the moment. They’re taking it very seriously!

I saw the sketches.

Patricia Quinn: I know! I have a friend who has a Magenta-Obsession, and she’s behind this full-blast on facebook, and she’s gathering all these votes for it. It’s very exciting. And in Belfast, they’ve written, ‘Patricia Quinn does deserve a statue, because all we’ve had here is the Titanic and alcoholic wife-beaters. And she’s sexually liberated Northern Ireland.’

Little Nell: She’s exhausted now, give her a statue!

Patricia Quinn: I’ve tried to do it all over the world, and it is exhausting.

If you leave statues everywhere, you don’t have to go back! You’re always there.

At events like this, do you also get Doctor Who recognition?

Patricia Quinn: A little bit. When I was at Atlanta, Georgia, my Doctor [Sylvester McCoy] was there, so we ended up doing a question and answer with him. So they said to me, ‘Should we show all three episodes, Pat?’ And I said, ‘Do you have to? … Couldn’t you do one, or maybe two?’ Because I didn’t want to bore the audience to death. And they said, ‘It doesn’t, because they’re so into it.’ And Sylvester said, ‘She only wants one or two cause she dies halfway through the second one!’ And I thought, ‘Do you just want to see yourself again, for three episodes? Excusez-moi!’

And spoiler alert for people in the crowd who hadn’t seen it!

Little Nell: Absolutely! I hope you put him straight back in his box, darling.

Do you two see each other very often?

Little Nell: Not enough, because we live on different continents, but we love seeing each other at these events. It’s great doing them together.

Patricia Quinn: …I paid her to say that.

It looks like you guys must have the best times, just sitting and talking.

Little Nell: If you’d done this interview with us when we were filming Rocky Horror, this is how we would all be. We had an absolute laugh all the time. Cause we’d all done the theatre show together, so we were all old friends.

I saw Tim [Curry] at a cafe once, and I saw this eight-year-old kid walk past, and go ‘Frank-N-Furter!’ And Tim just smiled, and did a little bow… It’s amazing how generation after generation are getting into it.

Little Nell: That’s just the sort of person who needs to see it at five, to realise that there’s nothing unusual about a man wearing make-up and high heels. A friend of mine showed it to their eleven-year-old son last week. They said to me, ‘I think he’s old enough’, and I said, ‘He is absolutely old enough.’ And I saw them the next day, they said, ‘After twenty minutes, he was bored stiff.’ I’d been expecting him to be waiting for me at the door, wanting me to show him how to do the Time Warp.

Patricia Quinn: When I was in San Francisco for a Rocky Horror Show there, we did a question and answer. And I met Lady Bear, who is a great drag artist, dressed as Magenta. She’s the size of the ceiling, with a red curly wig, and her maid’s outfit, and I’m standing next to her looking the size of a peanut. Just a tiny little figure. But I got used to it. I mean, when I saw my first boy-Magenta, I was at the Waverly at New York, and I thought, ‘How odd, a boy is dressing up like me,’ but then I went home to the Belfast Film Festival, and there were four Belfast drag-queen Magentas, and I thought, ‘I am the fifth Belfast Magenta.’ Amazing, isn’t it?

So many great stories.

Little Nell: Well come and see us at the question and answer, and we’ll go on about all this stuff.

Patricia Quinn: Thank you for this.

Absolute pleasure to meet you both!