SXSW Film Review: Audiences with a penchant for the abstract are likely to enjoy The Carnivores 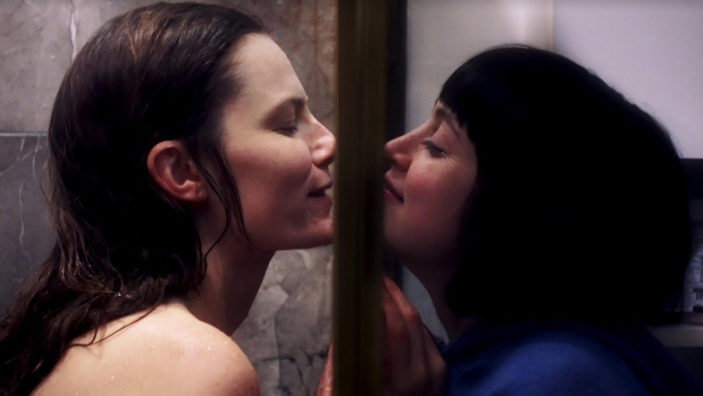 *The AU Review will continue with its planned SXSW 2020 coverage.  We have been in contact with the respective representatives for available films in order to give them the coverage they intended.

You can love your dog, and then you can love your dog.  And whilst Caleb Michael Johnson‘s bizarre effort The Carnivores wouldn’t be technically classified as a love triangle between a (debatably) loving couple and their hound, he certainly suggests there’s trouble in this relationship’s paradise, with the dog to blame.

Working from a script he co-wrote with Jeff Bay Smith, based off his own experiences being married to a sleepwalker, The Carnivores‘ absurd nature is somehow never elevated to the point of humorous lunacy as the film adheres to its dark undercurrent, a mentality that is evident from the film’s beginning.

The subject of sleepwalking and the presence of the aforementioned dog (“Harvie”) converge early on in the film’s brisk 77 minute running time when we are introduced to Bret (Lindsay Burdge) and Alice (Tallie Medel), a couple currently struggling through both the financial hardship of their ailing pet – it’s technically Bret’s – and the utter lack of intimacy this has seemingly given birth to.  Alice is particularly feeling the brunt of their sexless situation, so much so that she is tracking their sexual activity in a journal; as we are given a gander at the pages, it’s not so much as not having sex regularly but not at all.

To say Alice resents Bret’s dog would be putting it lightly – there’s a slightly sinister exchange between Alice and their veterinarian that suggests she’s hoping that the pooch will give in to his sickness – so when Harvie goes missing one day, we’re unsurprised at Alice’s relative aloofness in helping Bret track him down.  It’s also of concern that Alice has begun sleepwalking at night, often waking up outside in random places, sometimes with the dog in tow.  Her latest venture however suggests something has happened to Harvie in the midst of her slumber, something that plagues Alice’s clearly already fragile psyche.

If Bret’s determination to find Harvie, and Alice’s increasing guilt over the situation wasn’t enough, Johnson litters the film with uncomfortable imagery relating to Alice’s odd fixation with meat – she and Bret are vegetarian, as we are informed – which further places a dark, horrific element relating to Alice’s fears over her actions whilst she’s sleepwalking.

Whilst the outline for The Carnivores alludes to a more genre-centric feature – it very easily could’ve been a straight-forward horror film – Johnson has peppered this with a strong sense of emotion, utilising the metaphor of love and all its consumptions to an involved degree.  We are kept at something of a distance though as many of the film’s shots suggests much of what takes place isn’t entirely real, so as much as Bret and Alice’s plight can resonate, we are constantly reminded that things may not be as tragic as they appear.

With two strong performances from Burdge and Medel at its core – Medel is especially good – The Carnivores mostly overcomes any of its tonal issues thanks to their dedication to material that delights in not tying itself down to one specific lane.  Audiences with a penchant for the abstract and enigmatic are likely to to find enjoyment in Johnson’s complex character study, but those who need specific exposition, this is one “love story” you won’t want to read.