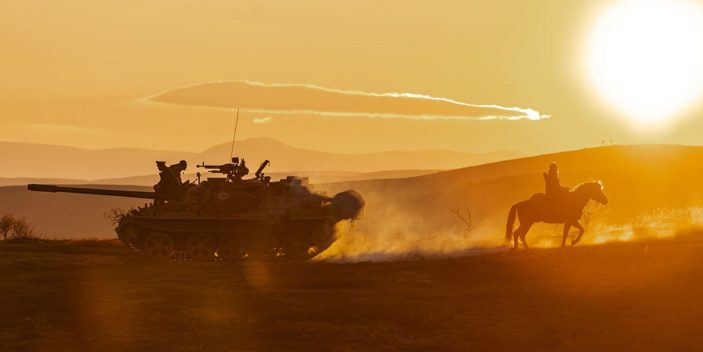 There’s both a sense of adhering to the temperaments of action films gone by and embracing the current and future state of the genre present in Jalmari Helander‘s Sisu.

Matching its dark sense of humour (and I mean dark) with a violently bloody mentality (and I mean bloody!), Sisu manages to present the simplest of narratives with a coat of hyper-graphic paint that means its audience are never lacking in exploitive thrills.

A man of few words, Aatami (Jorma Tommila, an absolute beast) is a former soldier, now solitary miner, who lives out in the desolate wild in the throws of World War II.  Uncovering a life-altering pile of gold on his latest travels, Aatami attempts to take it to his nearest town’s bank for an understandable exchange.  Oh, if only Helander made it that easy.

Along the way he crosses paths with a Nazi battalion – led by the ruthless  SS Obersturmführer (Aksel Hennie) – who intend to steal his gold and leave him for dead.  Again, if only it was that easy.  Realising too late that Aatami’s existence comes with an unstoppable wrath, Helander leans into a Rambo-meets-Jason Vorhees mindset for the imposing character as Aatami hunts and kills them without even a second thought; “It’s not that he’s immortal.  He just refuses to die” is how he’s so gloriously described.

Whilst the rest of the film is essentially one big action set-piece as Aatami conjures a variety of violent manners to exterminate the Nazis – it’s not hyperbolic when I say that every gory orchestrated antic is worthy of applause – the barebones narrative has enough subtle commentary and study on character that you never feel as if the violence is there as a distraction.  It elevates the story without masking its simplicity.

An amalgamation of Sergio Leone by way of First Blood and Mad Max – to say it’s Tarantino-adjacent would be too easy – Sisu is visually exciting, shamelessly playful, and always, always unpredictable.  Just when you think Helander and Tommila have crafted the film’s best sequence or kill scene, they immediately top it with an ease that speaks to the director’s unique imagination.  Best seen with an enthusiastic audience versed in the ways of exploitive cinema, Sisu is an R-rated crowd pleaser through and through.

Sisu is screening as part of this year’s Toronto Film Festival, running physically between September 8th and 18th, 2022, and digitally from September 13th.