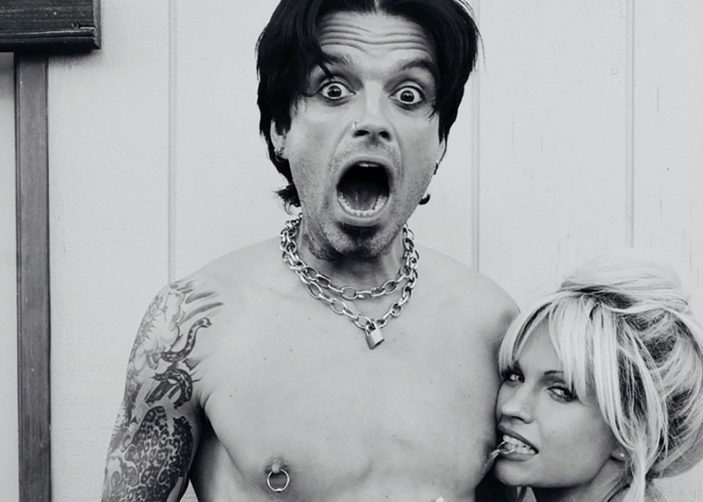 Over the last year there’s been a heavy re-examination regarding the critical response the media placed upon women in the public eye.  Recent documentaries about Britney Spears and Janet Jackson have truly bought the discussion into a manner that extends beyond their fandom, and something like Pam & Tommy, as exaggerated at times it is, is likely to do the same for one half of its titular duo, Pamela Anderson, whose involvement in the infamous sex tape undoubtedly undid a career she was already fighting so hard to maintain.

Before Paris Hilton and Kim Kardashian essentially birthed their careers from the recording of such intimate dalliances with their significant others, Anderson and then-husband Tommy Lee, in the 90’s peak of their saturated popularity, saw almost an adverse reaction – her considerably more so – as this wasn’t their own doing, and as aesthetically appealing both parties were (to call both well endowed would be an understatement) it wasn’t a flattering experience.

Directed by Craig Gillespie (I, Tonya, Cruella), Pam & Tommy seeks to uncover the truth over its 8 episode run, weaving sex and scandal throughout an ultimate love story that is unexpectedly emotional as it details the double standards, rape connotations and gender expectations that are still remarkably prevalent in today’s culture.

The wheels are put in motion through our everyman, Rand Gauthier (Seth Rogen, also serving as the show’s developer and executive producer), a contractor whose karmic beliefs means he’s sure that all his hard work is going to be richly rewarded, and given that he’s renovating Tommy Lee’s (Sebastian Stan) expansive mansion – where “money is no object” – he feels he’s due.  Of course Tommy being a loose cannon and dissatisfied with the work Rand has put in, which has more to do with Tommy changing his mind so often that Rand’s work becomes impossible to finish, he’s fired as a result and opts to manifest karma himself by robbing Lee’s house, specifically targeting the Motley Crue rocker’s prized safe.

With the show laying such a strong focus on Rand, it’s understandable for audiences to worry that Rogen’s finger on the narrative may try its hand at softening Gauthier’s involvement in the overall exploitation.  Whilst it’s true that Rand stole the safe unaware it contained the home video of Pam and Tommy enjoying each other on their sex-filled honeymoon – a sequence that immediately earns the show its R rating – and his issue was entirely with Lee from a professional standpoint, once he discovered the tape and knew Anderson could be collateral damage, he ran with such an idea and ultimately deserved his own unravelling.  He doesn’t understand why he isn’t more successful once the tape is in rotation, and it’s this B-story of Gauthier’s own self that plays in neat parallel to the personal and professional damage that befalls upon Tommy and, more specifically, Pamela.

Which brings us to the woman herself.  One of Pam & Tommy‘s greatest narrative choices is that it respects Anderson as a human and as the actress she so clearly wanted to be.  She was consistently undermined for her looks – one of the telling scenes of how she was viewed on Baywatch was when she spends days rehearsing a serious monologue, one she is ecstatic to receive in a bid to prove herself beyond the red swimsuit, only to have it cut at the last minute, with the directors opting for a running-into-the-water scene because it’s “more powerful” – and never truly taken seriously, despite her obvious respect of everyone in the industry around her.

She charms the male-heavy media at press events, whilst asking assistants on the Baywatch set about their children.  She’s honestly just a regular person, almost unaware of her own perception, wanting to advance herself in an industry that has already pigeonholed her.  It’s this framing of Anderson that gives the show its emotional edge, proving genuinely upsetting when the ramifications of the tape undo her, which all plays effortlessly into Lily James‘ pitch-perfect embodiment.  Much has already been said about the actress’s physical transformation – the blonde highlights and subtle make-up and lip filler simulations making her a dead-ringer for Anderson – but the performance goes beyond that, with James emulating her vocal cadences and capturing the personable persona that she so rarely got to expose.

The show is smart enough to know that it can’t solely focus on just the tape, and whilst the release of it kickstarted the conversations around celebrity, autonomy, and the internet (remember, this is the mid-90’s), it’s the investigation into consent and how humiliating such an act can be for both parties.  Lee doesn’t quite understand Anderson’s stance on how the tape can reflect negatively on them, with the reaction to his involvement more celebratory than salacious.  A man with an appendage such as Lee having unbridled sex with a woman like Anderson? That’s something men will high-five him for.  Anderson, on the other hand, knows that the tape will make her a laughing stock and destroy any momentum she believed she had in advancing her career; there’s also quite a telling moment regarding how her involvement in the tape pertains to the notion of pornography when she attempts to sue Penthouse magazine.

Whilst the tape leans into the assumption that Anderson and Lee’s relationship was solely based on physicality, what they shared is a connection they still admit to this day is something they’ll never match with another.  Theirs was an intense courtship, and the series has a lot of fun early on detailing the rather raucous road they travelled together in the beginning stages of being together; a moment of Lee conversing with his own penis certainly brings a brief moment of levity to a show that’s surprisingly emotional.

A genuinely interesting, funny, and emotionally mature series, Pam & Tommy is sure to prove an engaging insight to a story that many are under the assumption they already know.  James and Stan are nothing short of mesmerizing here, with James particularly revelatory, transforming herself to showcase Pamela Anderson as the wholly realised person she so tragically never got to be.

Pam & Tommy will premiere its first three episodes in Australia and New Zealand on Star On Disney+ on Wednesday, February 2nd, 2022.  Each subsequent episode will be released weekly.  It will stream in the United States on Hulu.