Season Review: Chloe is an intriguing, thrilling series about the web of lies built around social media 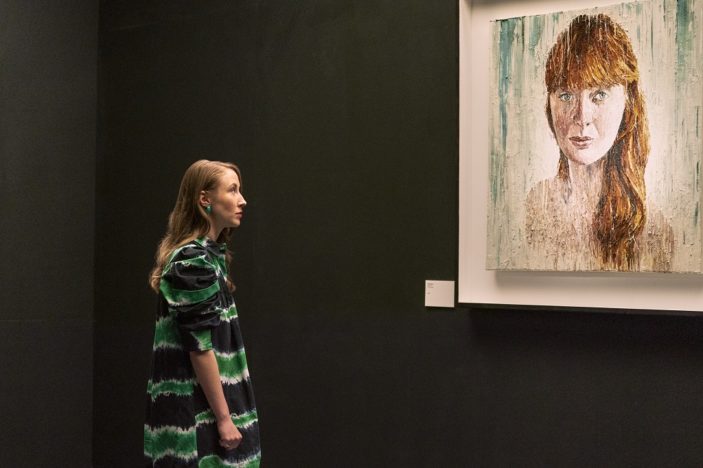 Watching the anti-heroine of Alice Seabright‘s thrilling series Chloe, Becky Green (Erin Doherty, an absolute star-making turn), as she scrolls through the social media lifestyle of the titular Chloe (Poppy Gilbert), a flame-haired femme with a seemingly enviable and lavish existence, the loneliness and self-loathing is palpable.

It’s a feeling we’ve probably all experienced, noting the seemingly perfect state of the beautifully tailored of those on the other side of our devices and wondering what it must be like to live so immaculately.  Becky, however, goes a step further than mere visual admiration, shapeshifting her way into Chloe’s inner circle; a much easier situation to manoeuvre when she learns of Chloe’s sudden passing.

Given that we see early on in the series’ 6 episodes how easy it is for Becky to infiltrate surroundings – overhearing her boss mention an art gallery opening, she knows that dropping the right name whilst adorned in a fancy coat will get her in – we’re happy to go along with her on her tense travels as she hopes to uncover just what happened to the evidently troubled Chloe.

Cosplaying as “Sasha”, an art dealer with a slick wardrobe and a faux backstory involving the Japanese art scene, she first wins over Chloe’s bestie Livia (Pippa Bennet-Warner), who’s penchant for location-tagging her pricey yoga classes makes it easy for a chance encounter.  Livia is suitably warm to the charming and, to her, intriguing Sasha, happily inviting her into the well-connected circle she travels in.  This would be all well and good for the usually modest Becky if she hadn’t played pretend at another recent event and fooled Josh (Brandon Michael Hall), a contact of Livia’s whose eye on Becky is now even more fixed.

A series that lives and dies off both its central mystery and performance, Chloe manages to overcome its situational convenience thanks to the utter commitment of Doherty.  Whilst we as an audience become emotionally invested in Chloe’s plight – and just why Becky felt the need to investigate is gradually teased to reveal a much bigger, darker picture – it’s the occasional dry humour and unbearable tension created through Becky-as-Sasha’s web of lies that immediately hooks us.

Despite her bad behaviour, we feel for Becky too, somehow earning our sympathy even as she compulsively lies and spins a twisted web that she only has herself to blame for becoming entangled with, a trait entirely built upon by the stunning Doherty who navigates this intricate series with a cunningness that’s formidable as it is frightening.

Chloe, the six-part limited series, is now streaming on Prime Video in Australia.