Please Baby Please muses on gender and orientation in a manner that’s more sleazy than it is stylish: Melbourne International Film Festival Review 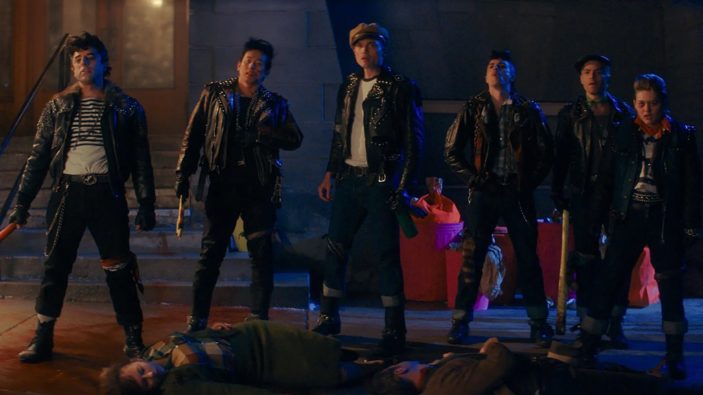 A gaudy game of cat-and-mouse and pseudo-philosophical musings on sexual orientation and gender sit at the core of Amanda Kramer‘s Please Baby Please, a wild but, sadly, insufferable drama that’s more sleazy than it is stylish.

Set in 1950’s New York, the film reveals its bizarre, sexualised tone in its early minutes when bohemian couple Arthur and Suze (Harry Melling and Andrea Riseborough) witness a murder outside their apartment building.  Whilst understandably unnerved by what they have seen – not helped by the fact the perpetrators know their exact address – the couple are more intrigued and, ultimately, aroused by such an act, with the violent and hyper-masculinity of the street-gang spurring an awakening within themselves as both individuals and a couple.

An exploration of their own queerness follows, with Arthur, already mildly rejecting what it is to be a traditional man, excited by the prospect of Teddy (Karl Glusman), one of the frontmen of the murderous gang who appears to exist quite openly in expressing his homosexual tendencies, whilst Suze is far more aggressive in her journey towards embracing the more masculine energy she exudes.

Whilst it’s obvious that Kramer has plenty to say about gender roles and moving beyond such restrictions with a wild abandon, her approach in such high camp and void subtlety means Please Baby Please feels like a violent assault on the senses.  American consumerism and the associated gender roles with such products as the washing machine and the iron allow her to frame the characters as a reflection of the 1950’s time period just as much as a subversion of it, and though such commentary is topical, it’s a conversation that feels far too exhausting to entertain when heard through Kramer’s projection.

Its largely blue-and-red colour pallet and almost stage-show like setting mean it’s, at least, visually exciting, and casting a large array of LGBTQIA+ actors – including non-binary performer Ryan Simpkins as one of the more sensitive members of the killer greaser gang – lends the film some weight in its subject matter, but sexual fluidity doesn’t need to be handled with such gusto.  In hoping to comment on the subject in a bid to normalise it, Kramer’s over-the-top approach ironically places a distance between the audience and the film, further wedged by Riseborough’s go-for-broke performance that sees the actress play to the bleachers before devouring the scenery in a manner that’s laughably off-putting.

ONE STAR (OUT OF FIVE)

Please Baby Please is screening as part of this year’s Melbourne International Film Festival, running in cinemas between August 4th and 21st, 2022, and online through MIFF Play August 11th and 28th, 2022.  For more information head to the official MIFF page.