On The Come Up harnesses a strong, fierce voice that cuts through narrative familiarities: TIFF 2022 Review 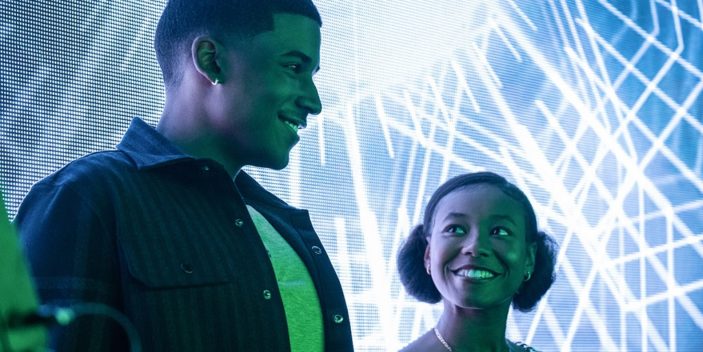 Author Angie Thomas has become something of a contemporary prose lyricist for the new wave of young coloured youths through her breakout novels The Hate U Give and On The Come Up.  Breathing a certain life into their own coming of age stories, her words prove a promising soundboard for actress Sanaa Lathan‘s foray into direction.

On The Come Up centres itself around 16-year-old Bri Jackson (Jamila C. Gray), a rapper-in-the-making whose moniker – Lil’ Law – is an homage to her late father, Lawless, a rapper whose success story gave (and still gives) the fictional American town of Garden Heights a sense of pride and encouragement.  Just as ambitious as her late pops, Bri frequents a local haunt where bar spitting opposite aspiring rappers is a nightly occurrence, and she’s hoping enough wins will set her on a path of glory; former neighbourhood amateur Milez (Michael Cooper Jr.) something of a blueprint as a success-on-the-rise, thanks to a catchy, if generic, tune and slick management from his father, Supreme (Method Man), who, coincidentally, managed Lawless years prior.

As well as being her creative outlet, Bri’s on stage expressions are a place for her to escape from her mother, Jay (Lathan in a wonderful supportive turn).  Whilst the present Jay is trying her best to hold a job and pay the bills, whilst being something of a loving, understanding presence to Bri, her past as a heroin addict who near-abandoned both Bri and her son (Titus Makin) as children means she hasn’t earned Bri’s respect back.

Despite their combative nature at times, Bri takes offence whenever either Jay or her late father are used as easy targets by her opponents in the rapping ring, and after initially choking during the film’s first stand-off, Bri comes back swinging when placed against Milez, whose hero’s welcome is marred by her eclipsing talent, something Supreme notes and hopes to utilise.  With his interest and connections, Bri starts to see that a better life is possible, but Supreme’s dangling of wealth and success also drives a wedge between her and Pooh (a stellar Da’Vine Joy Randolph), her aunt and manager, who continually promises but fails to deliver.

Kay Oyegun‘s script admittedly does ebb and flow between a series of narrative tropes that these type of “creatives-on-the-rise-before-falling” stories often adhered to, but whilst there’s familiarity here – we’re unsurprised when Bri’s first major hit track is one that ultimately goes against her true persona – it has a genuine spark and a loud-enough voice that we forgive it so.  There are a slew of undercooked plot strands – Bri’s romantic life and a queer exploration between one of her best friends and an unlikely ally are two examples that feel like they needed more expansion – but whenever On The Come Up places its eyes solely on Bri’s rap battles and her relationships with both Jay and Pooh, there’s both a ferocity and a tenderness that can’t help but elevate Lathan’s work.

Ultimately an uplifting feature about learning from your own mistakes and finding your footing once more, On The Come Up may not explore unvetted territory, but the fact that the voice of a woman of colour is amplified so clearly – both through Lathan’s confident direction and Gray’s emotional performance – means even the story’s occasional clichés are forgiven.

On The Come Up is screening as part of this year’s Toronto Film Festival, running physically between September 8th and 18th, 2022, and digitally from September 13th.