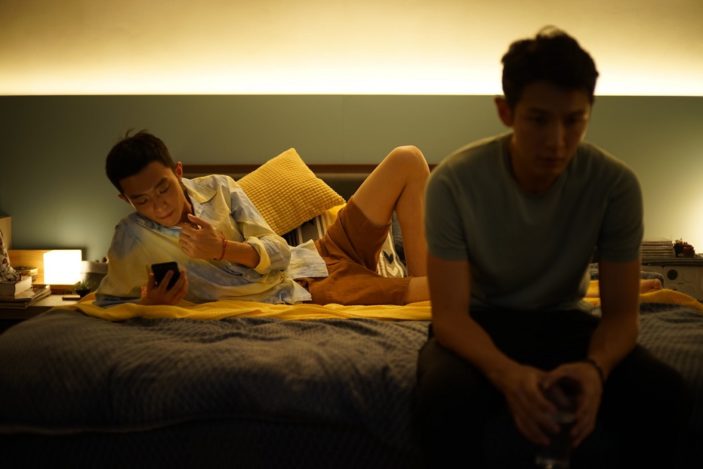 Films dealing with queer thematics are few and far between in mainland China.  Due to the government’s strict regime on censorship, stories detailing the LGBTQ communities are a rarity, which is why a feature like Moneyboys is all the more curious.  Though set in China, it was filmed in the neighbouring Taiwan, co-financed with European production companies, made by a filmmaker who moved from China to Austria as a teen; first-time director CB Yi.

Though it could’ve been easy for Yi to address the constricted view of homosexuality through his central setting of the paid sex worker environment, Moneyboys is a smarter film than that, more celebrating this industry and honouring the economic value it has to the younger generations.  The initial loud, neon-soaked visuals celebrating a monetarily sound lifestyle of sex and excess soon grounds to something far more contemplative, with Yi’s film proving to be both grand and simple in its depiction of cultural tension.

There’s an understandable nervousness surrounding the introduction of Fei (Kai Ko), a rookie hustler who has yet to master the calm, collected manner that the profession calls for; he awkwardly expresses gratitude when invited to partake in a threesome with a client.  During this formative time in his career he’s in a relationship with the concerned, overly protective Xiaolai (JC Lin).  It takes only a matter of moments for the dynamic of Fei and Xiaolai’s relationship to alter when the latter fights a client he believes oversteps the former’s boundaries, forcing Xiaolai out of the city and Fei to truly come into his own.  Five years pass and Fei has fully reinvented himself in the industry, thriving as a male-for-hire, living a luxurious lifestyle that speaks to the profession’s possibilities.

That momentary comfort of stability and indulgence proves fleeting though, as the downside to Fei’s success is all too realised when he visits his home village and has his lifestyle exposed by his dying grandfather.  The shame of his career offset by the donations he has been contributing to his family leaves him indignant, sending him back home where his life starts to unravel through the accompaniment of a childhood friend (Bai Yufan), who looks to Fei for guidance in his path of sex work.

Despite such explicit detailing in the work of the profession, Yi wisely downplays any visual stimulants, preferring to utilise the verbal aspects when it comes to both the film’s violent and sexual material; there’s a particularly volatile attack at a family dinner that escalates to homophobic slurs and an attack that remains just out of vision of the audiences’ eye.  It’s this respect that is carried across the film that keeps Moneyboys from ever feeling gratuitous or unmannerly towards its precarious subject.

A rare film in its depiction of homosexuality in China, Moneyboys maintains a sensitivity and warmth about itself.  A contemplative drama spearheaded by a stunning Ko as the troubled Fei, Yi’s film has a deliberate distance to it that ironically only further draws us in to view an environment so few of us could understand.

Moneyboys was originally reviewed as part of our 2021 Taiwan Film Festival in Australia coverage.