Mandy is a crazy two-hour LSD trip led by a totally unhinged Nicolas Cage performance. The film follows Red (Cage) and Mandy (Andrea Riseborough) who live a peaceful life in the Pacific Northwest, that is until a religious cult barge in and rob Red of the love of his life, sending the man on a bloody journey of revenge.

Writer/director Panos Cosmatos makes use of a chilling Jóhann Jóhannsson score, psychedelic visuals, and a riveting Nic Cage performance to make this somewhat unsettling and definitely insane gothic-fantasy horror come to life. This is by no means a horror film in the traditional sense; rather than delivering scares the focus is always on building moody atmospheres to draw you in to the weirdness and confronting nature of what is going on. Cosmatos uses transfixing visuals such as the bleeding blue and red hues reminiscent of Guillermo Del Toro‘s Crimson Peak (2015) to create this mystical hallucinogenic tone. A number of sequences repeatedly fade softly in and out of darkness enhancing the tense nature of what the characters are going through. These visuals in conjunction with the powerful, electric, bass-heavy score from Jóhannsson create an atmosphere that will lock you in to every scene regardless of whether you are wholly into the story or not. From beginning to end Jóhannsson’s score is absolutely thrilling and it never lets up. He is a master of his art as seen through his collaborations with Denis Villeneuve on Prisoners (2013), Sicario (2015), Arrival (2016) and that is no different here as the score is my favourite element of the film. But I though feel like from a technical standpoint (in terms of the score and the visuals) Cosmatos has executed his vision for this film near flawlessly, the story and pacing is where my issues mainly lie.

For anyone looking for a quick fix of Nicolas Cage at his utmost craziness this has everything you’d want, however you’ll be waiting for the latter half of the film which is where the core revenge plot really kicks in. While Cosmatos explores the more dream-like psychedelic experiences of some of the characters in the first half of the film you will be subjected to a very slow pace with a lot of foreshadowing, setup of characters, and symbolic references. The slow burn leading up to the ‘release of the beast’ is most certainly planned by Cosmatos and is emphasised by the long static shots slowly compressing and the extended dialogue sequences between characters, it just didn’t work for me. I found it a little difficult to get into the film at the pace it runs with for the first half and couldn’t really engage with the story and the characters as much. I understood exactly what was going on and where it was going to be heading but I just wasn’t entirely engaged in the story save for the few scenes Nicolas Cage has in these early moments. The majority of focus early on in the film is on Mandy herself, exploring who she is, her relationship with Red, and how she gets into the predicament that kicks off the main plot. As I mentioned, a number of the sequences in the first two ‘chapters’ (the film is broken up into three chapters by title cards) are beautiful and stunning but the story being told here didn’t resonate with me… that is until the third chapter kicks in. 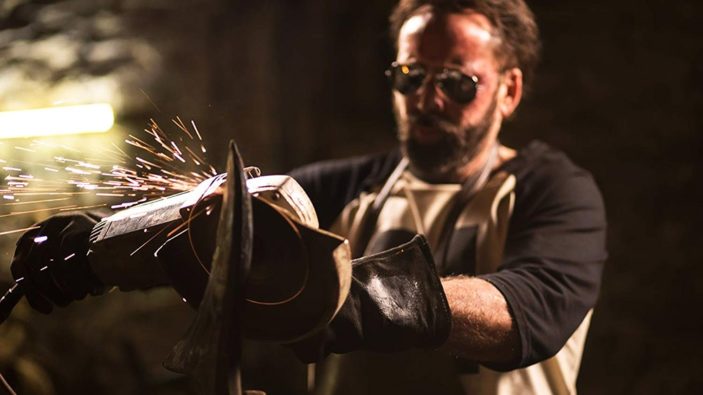 When the meat of the film kicks in this is where Mandy shines is in all of its violence-filled glory. It goes well over the top with the violence and bloodiness of the revenge elements but they fit accurately with the character they set up in Red. This latter half is such a drastic contrast of the first half as the pace is heightened and once Red sets off on his quest for vengeance the blood-rush insanity rides through to the end. Some might think the content here touches on the borders of torture-porn and glorifying violence for the sake of it but Cosmatos does a great job at establishing reason for everything a character does. He makes you understand every brutal action that Red initiates and it gives a murder-filled rampage some emotion to lean back on. Cosmatos may have had the vision but the only man who could have sold the absolute insanity of that latter half is Nicolas Cage.

This right here may be one of Cage’s best performances – if not the best – as he takes on the insanity of this character and fully commits to the role. There are a number of sequences in here where Cage displays some impeccable acting, such as in one lengthy take in a bathroom where you see this man completely unravel from the inside-out. He is so captivating in here that when on screen (predominantly in the second half) you can’t look away as he commands your attention with his sheer dedication. Cage has become known (for better or worse) for really letting loose in his roles and ’embracing the crazy’ so to speak, now, that fact affects the film in a number of ways, none of which are detrimental to the experience but do change the way a theatre may experience it. I don’t think Cosmatos’ intention with using Nicolas Cage in this film was to deliver humour through watching him go full on crazy. I believe Cosmatos chose Cage because he has shown he can go to those extremes and that’s more than proven here. But as Cage has become a bit of an internet sensation for his crazy facial expressions in past roles, the audience (in my theatre at least) saw quite a bit of this film as something satirical or not all that serious. Dialogue Cage utters that aren’t remotely funny on their own bought about laughs in the crowd due to his delivery, intense dramatic moments that I don’t think were seeking for a reaction of laughter got one anyway. But don’t get me wrong, Cosmatos does incorporate some moments in here that are extreme or funny and designed to get a sense of excitement out of the audience, just no-where near as much as the audience I was with believed there to be. It may affect the way people interpret Cosmatos’ vision for the story but I say as long as they’re enjoying it, there’s nothing to complain about.

I have to say that overall I enjoyed Mandy for the extremity of the latter half in which you get to see a completely unraveled Nicolas Cage seeking revenge but also for the technical prowess Cosmatos brings to the entire film. The transfixing visuals and booming score make for some thrilling sequences across the entire runtime. Nicolas Cage puts in an amazing performance and one that he will no doubt be remembered by. But the film did let me down throughout the majority of the first half in terms of the story and the pacing. I couldn’t get into the film as much as I wanted to and a number of story-driven scenes or dialogue sequences just didn’t grab me whatsoever. It’s a shame but it doesn’t take away from my enjoyment of the latter half of this movie which I’d say is well worth checking out.