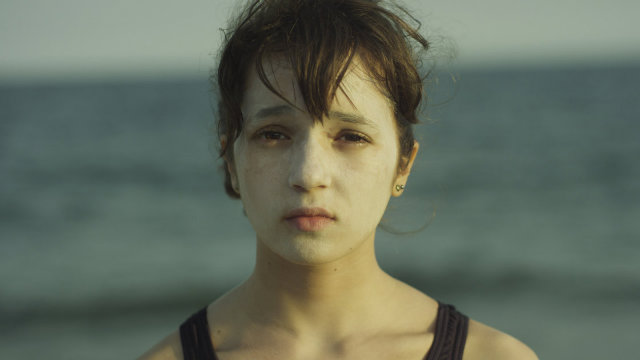 A quietly devastating meditation on female adolescence, It Felt Like Love is the feature debut of director Eliza Pittman made on a tiny budget, and shot over 18 days in August 2012.

The film opens with an awkward teenaged Lila (Gina Piersanti), childishly smeared in sunscreen at the beach. It’s this yardstick from which Lila’s character arc moves over the course of a long hot summer on the outskirts of Brooklyn. Tired of her own sexual naiveté, Lila is anxious to enter the world of sex – even if she doesn’t really know what that means. Being best friends with the sexually experienced Chiara (Giovanna Salimeni), and hanging out with her and her sexed-up boyfriend Patrick (Jesse Cordasco) confounds her, even as it piques her interest further. Impatient for her chance at carnal knowledge, she pursues Sammy (Ronen Rubenstein), chosen, it seems, instantly and arbitrarily one day at the beach as the object of her desire.

The film traverses Lila’s sexual awakening in all its artless misunderstanding. Anyone with even the vaguest memory of their own adolescence will observe half-bemused, half-devastated, as Lila emerges from that liminal childhood state, clumsily awakened to the treacherous world of adolescent sexuality. Her ham-fisted approaches to Sammy begin with cringe-worthy innocence and slowly cross over into darker and more dangerous territory, as she cobbles together her desire from fragments of Chiara’s relationship, together with her own newly forming yearnings, and then sets out to make them a reality. It would all be in good innocent fun, were it not for the profoundly discomfiting lengths she seems willing to go to.

As with a lot of independent cinema – and, indeed, debut features – the film is a meditation, making use of the visual experience of cinema over dialogue-driven narrative. This approach makes the film a slow burn, but in its relatively short 82 minutes, creates an incredibly moving emotional palette. It’s the rich visual minutiae that give the plot its potency – beautiful, shadowy, semi-focused close-ups of the cherubic face of Piersanti, fused with her and her friends’ heady sexuality and long, languid takes of young body parts going through the motions of youth; just-forming hips, hot sweaty skin, shiny and full to almost-bursting and poorly applied eye makeup, smeared in the heat. These tightly-framed, evocative shots create a tension and an anxiety around the teenage rites of passage and bring into relief the few wide open shots of nature – a release both for Lila and the audience.

The film’s quietness works in its favour; with room left over after the restrained dialogue, close-ups and blurry details, it creates the kind of space that encourages reflection. With its fierce honesty, the film explores the binaries of this transitional stage of life – brutality and innocence, the shocking beauty of youth and the dizzying highs and lows of young adulthood, filled with shame, loneliness and redemption.