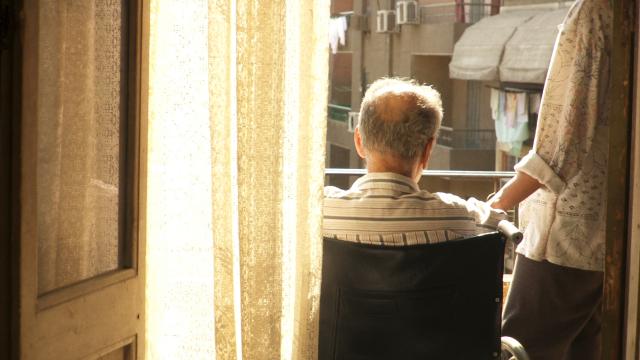 Set in current day Cairo over the course of one day, Coming Forth By Day is a slow moving and bleak meditation on the life of Suad (Donia Maher) an unmarried 30-something who lives with her parents, and together with her mother (Salma Al-Najjar), looks after her ailing father (Ahmed Lutfi) . As the film unravels, there is a fiercely tense, yet eerily quiet push-and-pull between her life within the apartment, and the external world outside.

Subverting ideas around patriarchy and power, the father’s post-stroke inertia dominates the lives of the two women, even while he is completely dependent on them, and they are bound by a strict sense of duty that appears to be both cultural and self-imposed. Requiring their constant attention, the two women tend painstakingly to his needs, cleaning, feeding and changing his soiled clothes, a routine of such brutal honesty as to create an unbearably visceral audience experience of sickness and stagnation.

With sparse dialogue and long uncut takes, the film builds a crackling tension between the two women. There is tension over the man’s mattress, and the need for a new one. “Mother, please don’t forget about the mattress”, Suad chastises. “We’ll see”, is her mother’s dry and impassive response. Though it remains unspoken, there is the sense that each are so tormented by the burden of his care, and racked with guilt at feeling so, they care for him with all the more dogged determination, while the relentlessness of this care comes to define them and their days.

A slow moving plot takes its time over the details of the mundaneness of life inside the apartment: several minutes of unbroken footage show Suad filling a basin with soap flakes, washing her father’s soiled clothes, washing her own hands, then applying hand cream while staring dreamily out a window through a billowing curtain and out into the warm yellow light outside.

Such banality fully captures and distills the emptiness of the women’s lives, while sandy, shadowy tones and gently hand-held camera work, especially effective on a bus journey, give the film a visual palette of realism. The first half of the film takes place entirely in this shadowy space, domestically scaled to the point of claustrophobia. The claustrophobia is highlighted by the amusing addition of the audio of American television programs in the background – an episode of Oprah in which she gives a tour of the “palatial” home of Celine Dion, an ironic and disconcerting form of escapism.

The holding pattern of their lives is broken by Suad’s announcement that she is going out, only for two hours, she promises. On the streets of Cairo, where she goes to the salon and then to meet her beau, there is a sinister atmosphere, first with an unsettling interaction on a bus with a fellow passenger, and then later a more worrying altercation with a bus driver. Meanwhile, her father has taken a turn for the worst. Her overnight journey to get home takes her through the vaguely menacing street of Cairo, along with an inner journey until she arrives at home in the morning.

What could have been disastrous resolves into a mere night spent outdoors. And yet she returns redeemed, it almost feels. But the redemption of the film’s title comes in the frustrated form of her mother, sitting amongst the filthy contents of her father’s mattress.

The languid pace builds to a frustrating plateau, and as an audience we are primed to feel that something is about to happen: it doesn’t. It’s this frustration, hardening into resignation, that forms the emotional core of the film.

Significantly, it is the feature debut of Hala Lotfy, one of Egypt’s only female filmmakers, and in its making, there was a great deal of frustration – from sourcing funding that allowed her project to remain independent, to finding the kind of apartment that allowed them to shoot in long, uncut takes, plus a five month hiatus during the revolution in which some of the crew were arrested for demonstrating. By the end, though, they had founded Hassala (‘money box’ in Arabic) a small independent production house for filmmakers in Egypt.

It’s a hard film to recommend – indeed, this MIFF screening saw a couple walk-outs. But it’s certainly beautiful, if bleak, in its own way, and as a bastion of independent Egyptian cinema, it’s a noteworthy piece of cinematic history.

Coming Forth By Day screened as part of the 2013 Melbourne International Film Festival.