Mass is a sickeningly uncomfortable and agonising drama about the aftermath of a school shooting: Melbourne International Film Festival Review 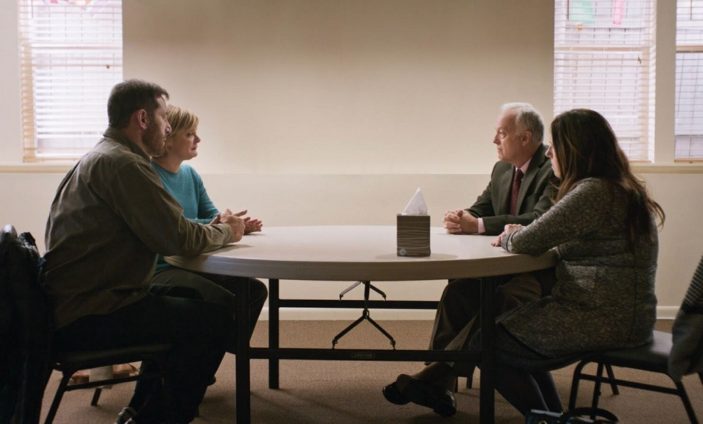 An agonising drama if ever there was one, Mass details the type of conversation that instantly makes you feel sickeningly uncomfortable.  And then to watch it unfold in a suffocating location for 110 minutes is a test of endurance that audiences may be unprepared for.

The tragedy at the centre of the conversation is one that’s unfortunately all too familiar: a high school shooting.  A quiet, out-of-the-way room in a church – overseen by the overly helpful, almost intrusively so, Judy (Brenda Wool) – is the setting for the two lots of parents who are both trying to overcome their grief and guilt; Jay (Jason Isaacs) and Gail (Martha Plimpton), whose son was one of the victims, and Richard (Reed Birney) and Linda (Ann Dowd), whose son was the shooter.

After a brief sequence where Judy and Kendra (Michele N. Carter), a mediator to the parents, exchange awkward pleasantries regarding the set-up of the room, writer/director Fran Kranz (an actor primarily known for his role in The Cabin in the Woods making his feature-length directorial debut) essentially locks us in the room with the quartet, not allowing any sense of breathing room until they come to their conclusion, whether that be emotional or logical.  Almost as if directing a stage play, Kranz wisely avoids much movement and foregoes the use of flashbacks to detail any of the past actions that have brought them to this place.  It’s air-tight.

Initially there’s a mutual, structured politeness that occurs during their conversation, each set of parents asking how their other surviving children are doing in the aftermath.  It’s pleasantries for the sake of it, something you assume was enforced by their respective lawyers, but it isn’t long before Jay and Gail press for answers from Richard and Linda.  How could they have not known that their son was homicidal? Jay and Gail press with emotion, Linda responds accordingly, whilst Richard presents what he knew in a matter-of-fact mentality, something that understandably irks Jay.  It’s through these exchanges that Kranz proves his strength as a screenwriter, navigating away from any heavy political stances and rounding each character with a temperament that makes them all individually relatable.

Mass is a film that refuses to blame.  Even as Jay and Gail learn of Richard and Linda’s son’s violent tendencies and introverted nature, it only further enhances what a sad life he lived as a victim of bullying himself whose mental illness went untreated.  The villain Jay and Gail so desperately want to point the finger at doesn’t exist.  It’s emotional torture, and for anyone who has experienced such a tragedy the film could be brutally triggering.

Devastating as it is to listen to these characters explain their own processes, Kranz has assembled four never-better actors who completely sink into their character’s psychological mind-frames which keeps the film utterly gripping, even when you want to step away from such emotional abuse.  Birney, an actor best known for his work on Broadway, and Dowd have the harder roles of the group, but they both effortlessly pull off what it is to be parents who are completely aware of the heinous act their son executed, but won’t apologise for loving him all the same; a final moment where Dowd shares a story about him ranks as the film’s most gut-wrenching scene.  Isaacs and Plimpton run more so on emotion, but also wisely avoid frenetic eruptions and “showy” actor moments to display their grief.  Their characters wants answers as much as closure, and both toe the line just so, each delivering stunning performances that are worthy of Oscar contention.

The decision to make Mass largely void of sentiment is a risk that has paid off in spades for Kranz.  It asks punishing questions.  It reveals troubled answers.  It isn’t making light of the tragedy at its core, merely expressing that the pieces those that are left behind have to pick up are never as black-and-white as what outsiders may assume.  Unpleasant it may be, Mass is powerful, unflinching storytelling that demands to be seen.

Mass is screening as part of this year’s Melbourne International Film Festival, running in cinemas between August 4th and 21st, 2022, and online through MIFF Play August 11th and 28th, 2022.  For more information head to the official MIFF page.